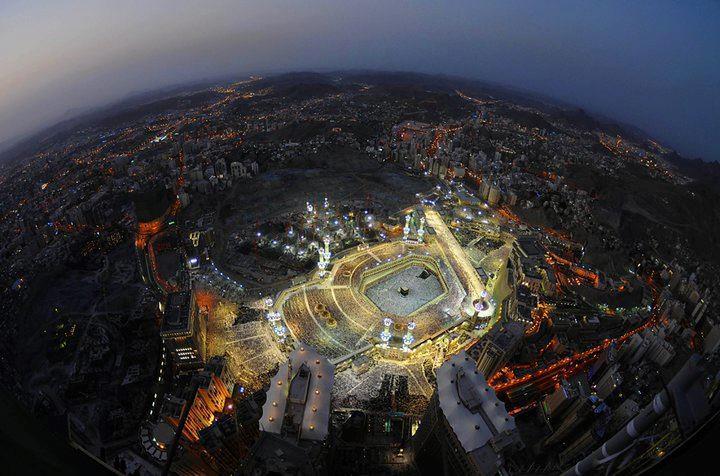 There is no place on Earth as venerated, as central or as holy to as many people as Makkah. By any objective standard, this valley in the Hijaz region of Arabia is the most celebrated place on Earth. Thousands circle the sacred Kaaba at the centre of the Haram sanctuary 24 hours a day. Millions of homes are adorned with pictures of it and over a billion face it five times a day. Allah says:

“Indeed, (the) First House set up for the mankind (is) the one which (is) at Bakkah, blessed and a guidance for the worlds.” (Surah Al-Imran 3:96)

In the province of Hejaz in the western part of Arabia, not far from the Red Sea, there lies the town of Makkah. In the centre of this town, there is a small square building made of stones, about 60 feet long, 60 feet wide and 60 feet high. Since time immemorial, this town and this stone-built world travellers have known the house. This is Baitullah, the House of Allah. Its sanctity and antiquity are older than history itself. Allah says:

“In it (are) signs clear, standing place of Ibrahim, and whoever enters it – is safe. And (due) to Allah upon the mankind (is) pilgrimage (of) the House (for one) who can [it] (find) away. And whoever disbelieved then indeed, Allah (is) free from need of the universe.” (Surah Al-Imran, 3:97)

In the five daily prayers, Muslims face the Kaaba in Mecca, Saudi Arabia. It is a cube-shaped stone structure that was built by Prophet Abraham and his son Ishmael on the same foundations where Prophet Adam is believed to have built a sanctuary for the worship of the One God. Muslims do not worship the Kaaba. Allah says:

“And for everyone (is) a direction – he turns towards it, so race (to) the good. Wherever that you will be will bring you (by) Allah together. Indeed, Allah (is) on everything All-Powerful.”(Surah Baqarah 2:148)

It serves as a focal point for Muslims around the world, unifying them in worship and symbolizing their common belief, spiritual focus and direction. Interestingly the inside of the Kaaba is empty. And as Allah wished to choose this desert land as a gathering place for Muslims, glory soon shaded the land of sand and stones. Allah says:

“And when (was) raising Ibrahim the foundations of the House and Ismail, (saying), “Our Lord! Accept from us. Indeed You! [You] (are) the All-Hearing, the All-Knowing.” (Surah Al Baqarah 2:127)

The first house established for the people was at Makkah, a Holy place and guidance to all beings. Qur’an firmly establishes the fact that Prophet Ibrahim was the real founder of the Holy Shrine. When Prophet Ibrahim built the Holy Shrine in Makkah, his prayers were that this place should remain a centre of worship for all good and pious people; that Allah should keep his family the custodians of the Holy place.

The first custodians of the Holy House

Ever since, it is Ismael, the son of Prophet Ibrahim, who helped his father to build this place and his descendants remained the custodians of the Holy Shrine. History tells us that centuries passed and the guardianship of the Kaaba remained in the family of Ismael.

Prophet Ibrahim and the Idols

Prophet Ibrahim built this House for devout worship to one God. But within his lifetime, people disobeyed his orders and began to put idols inside the Kaaba. Prophet Ibrahim had to clean the House of these idols and these idol worshippers. He told the people that this was a symbolic house of God. Allah says:

God does not live there for He is everywhere. People did not understand this logic and as soon as Prophet Ibrahim died, the people filled the place with idols again. They thronged to this place annually and worshipped their gods. Allah says:

“And when We made the House a place of return for mankind and (a place o) security and (said), “Take [from] (the) standing place (of) Ibrahim, (as) a place of prayer.” And We made a covenant with Ibrahim and Ismail [that], “[You both] purify My House for those who circumambulate and those who seclude themselves and those who bow down and those who prostrate.” (Surah Al-Baqarah 2:125)

It was over 4000 years later that the last of the line of Prophet Muhammad (peace be upon him) entered Makkah triumphantly, went inside the Kaaba and, with the help of his cousin and son in law, Ali Ibn Abu Talib and destroyed all the idols of Kaaba with their own hands. Allah says:

And say, “Has come to the truth and perished the falsehood. Indeed, the falsehood is (bound) to perish.” (Surah Al-Isra` 17:81)

At one stage of this destruction of idols, the tallest of the idol, Hubble, was brought down after Ali had to stand on the shoulders of the Prophet to carry out God’s orders. This was done in the 8th year of Hijra, January 630 AD after the bloodless victory at Makkah by the Prophet of Islam.

The direction of prayer

About a year and a half after the migration of the Prophet, the Muslims were ordered to turn towards Makkah for the direction of their prayer. The particular mosque in Medina where the Prophet instructed this is called Masjid al-Qiblatain, meaning the mosque with two Qiblas. This is because the original direction of prayer was towards Jerusalem. Allah says:

“This (was) a community (which) has passed away, for it what it earned and for you what you have earned. And not you will be asked about what they used to do.” (Surah Al-Baqarah 2:141)

At this same period, the Qur’an began to lay stress on the religion of Prophet Ibrahim, presenting Islam as a return to the purity of the religion of Prophet Ibrahim that, obscured by Judaism and Christianity, shone forth in its original brightness in the Qur’an. The pilgrimages to the Kaaba and ritual progressions around the building were continued but were now for the glorification of One God. Allah says:

“Allah has made the Kabah, the Sacred House, an establishment for mankind and the month(s) [the] sacred and the (animals) for offering and the garlands. That (is) so that you may know that Allah knows what (is) in the heavens and what (is) in the earth, and that Allah of everything (is) All-Knowing.” (Surah Al-Ma`idah 5:97)

If Allah, the Glorified, had placed His sacred House and His great signs among plantations, streams, soft and level plains, plenty of trees, an abundance of fruits, a thick population, close habitats, golden wheat, lush gardens, green land, watered plains, thriving orchards and crowded streets, the amount of recompense would have decreased because of the lightness of the trial. Allah says:

“Indeed, Allah orders you to render the trusts to their owners, and when you judge between the people to judge with justice. Indeed, Allah excellently advises you with it. Indeed, Allah is All-Hearing, All-Seeing.” (Surah An-Nisa 4: 58)

If the foundation on which the House is borne and the stones with which it has been raised had been of green emerald and red rubies, and there had been brightness and effulgence, then this would have lessened the action of doubts in the breasts, would have dismissed the effect of Satan’s activity from the hearts and would have stopped the surging of misgivings in people. Allah says:

“And when We assigned to Ibrahim (the) site (of) the House, “That (do) not associate with Me anything and purify My House for those who circumambulate and those who stand and those who bow, (and) those who prostrate.” (Surah Al-Hajj 22:26)

But Allah tries His creatures by means of different troubles, wants them to render worship through hardships and involves them in distresses, all in order to extract out vanity from their hearts, to settle down humbleness in their spirits and to make all this an open door for His favours and an easy means for His forgiveness (for their sins). May Peace, Mercy and Blessings of Allah be upon Prophet Muhammad Sal-All-Allahu-Alayhi-Wa-Sallam, his family and companions.