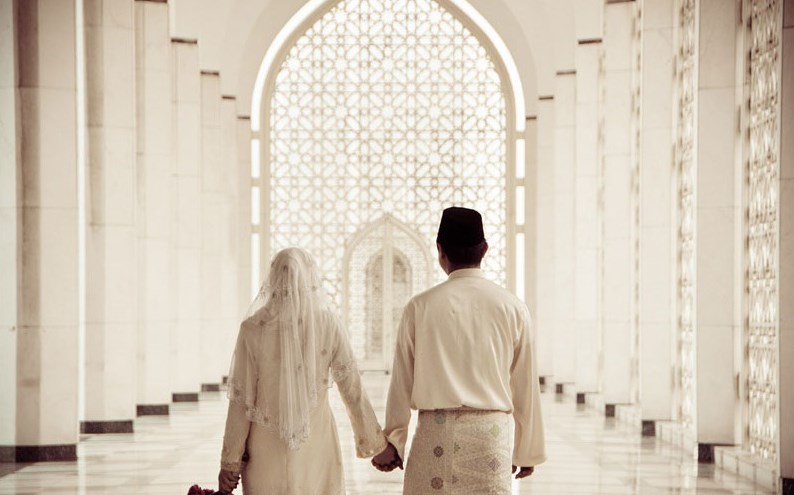 The religion of Islam came with the law and granted to the man and woman each his just right. The woman does not suffer injustice. Islam made the woman be pure. The husband-wife relationship is one of love and mercy, and from that love originates a miracle of life. The relationship between a husband and wife is not like that of neighbours or friends; it is much more extreme—on the verge of unity. The Quran expresses this nicely. Allah says:

“And of His signs is that He created for you from yourselves mates that you may find tranquillity in them, and He placed between you affection and mercy.  Indeed in that are signs for a people who give thought.” (Surah Ar-Rum 30:21)

Allah has indeed created man and woman to be the natural counterparts of the other. They are natural companions both physically and mentally. These indeed are signs for us. Allah says:

“And give the women their dower graciously. But if they remit to you anything of it (on there) own, then eat it (in) satisfaction (and) ease.” (Surah An-Nisa` 4:4)

In this way, the Qur’an beautifully illustrates the husband-wife relationship. Marriage must be a bond of mutual respect and love. The husband and wife must journey through the difficulties of this life together so that they may reach the ultimate destination of Jannah together. Whether wife, mother or sister, Islam granted the woman an important role in the service of society for the education of future generations in accordance with the guidance of the act. Allah says:

The couple’s relationship between man and woman must be based on love and mercy for each spouse to find comfort with each other. Islam has made obligatory, although guided by its principles, women’s rights to her husband. If people were working according to these principles, there would be bliss and happiness and love between the spouses last. Allah ordered the man to act with charity toward his wife.

Following are the important factors that can strengthen a marriage relationship in Islam:

It is the blessing of Allah Almighty to a man that he gave him a woman as a companion in their life and mother of his children. Thus, the wife is neither a slave nor one that suffers the injustice of the husband. There is no oppression or domination between man and wife, but rather love, understanding, and mutual respect. The Holy Prophet PBUH stated that in the lower world, there are goods and among the best property there is the virtuous woman. Allah says:

“And postmenopausal among the women who (do) not have a desire (for) marriage, then not is on them any blame that they put aside their (outer) garments, not displaying their adornment. And that they modestly refrain (is) better for them. And Allah (is) All-Hearer, All-Knower.” (Surah An-Nur 24:60)

There are many tips values and rules for a good marriage that would lead to a smooth relationship between husband and wife and by which the husband will win the love of his wife and her attention. Of all other things, a man should honour his wife. Allah says:

“And (do) not marry who married your fathers of the women except what has passed before, indeed it was an immorality and hateful, and (an) evil way.” (Surah An-Nisa` 4:22)

She is indeed the mother of his children, the custodian of his secret. It is required that a man respects his wife, loves her,  takes care of her and be gentle and merciful to her. He should not let his ego come in between their relationship or act in a tyrannical way that would hurt her. Allah says:

‘’And He (is) the One Who has created from the water human being and has made (for) him blood relationship and marriage relationship. And is your Lord All-Powerful?’’ (Surah Al-Furqan 25:54)

“O you who believe! Indeed, from your spouses and your children (are) enemies to you, so beware of them. But if you pardon and overlook and forgive, then indeed, Allah (is) Oft-Forgiving, Most Merciful.” (Surah At-Taghabun 64:14)

The nature of the relationship from the outset is that it should be one conducive to the fulfilment of companionship, affection/love, tranquillity, and mercy.  Furthermore, it is these elements that should be the context of marital interactions. Allah says:

“On the night of the fast, it is lawful for you to have sexual relations with your wives.  They are clothing/covering (libaas) for you and you for them….” (Quran 2:187)

Whoever wants to be modelled as the Messenger, he should be gentle and kind to his wife. The eminent Prophet Muhammad PBUH recommended a good life together with your wife, to endure what she could do to ignore certain failures that could come from it. Allah says:

“O you who believe! When you marry believing women and then, divorce them before [that] you have touched then not for you on them any waiting period (to) count concerning them. To provide for them and release them (with) a release good.” (Surah Al-Ahzab 33:49)

The Messenger of Allah was the living example of a perfect husband. So it is strongly suggested to follow the path of wisdom, tenderness, and mercy with your woman. Do not load your wife things she can’t stand, be at his side during difficulties and you will gain her love and respect. Allah says:

And those who say, “Our Lord! Grant to us from our spouses and our offspring comfort (to) our eyes, and make us for the righteous a leader.” (Surah Al-Furqan 25:74)

Islam lays great emphasis on love and kindness between the family members. Allah (SWT) has placed love and mercy between the spouses. A good spousal relationship is essential for the development of healthy, dynamic children who will be emotionally equipped to raise a loving family of their own and contribute to the welfare of society according to their abilities.