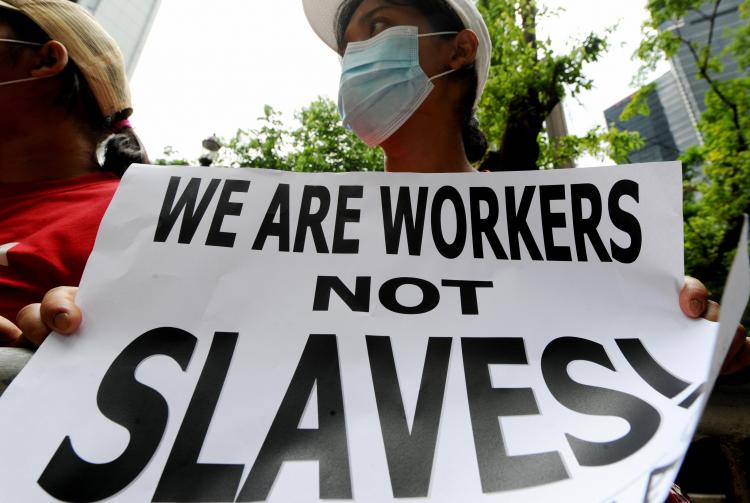 All praise is due to Allah (SWT). He is the creator, nurturer, sustainer, provider, protector, and one in supreme control of every aspect of every creature. We send complete blessings, peace, and salutations upon Muhammad (saw), upon all the messengers whom Allah had sent down to the man from the very beginning to the very end. And we ask Allah to bless all the companions of Muhammad (saw) and every single one of us. Allah says:

Slavery was a common practice in Arabia, and almost all over the world, before the time of Prophet Muhammad (PBUH). Victorious nations of the time considered the people captured by them, in battle, as a “commodity” – not as human beings – and used them mercilessly for their advantage. Regardless of their social status as a subordinate, a servant should be treated with kindness. It is applied when the servant is bringing food to the master.

“When the servant of anyone of you brings his food to him, if he does not make him sit with him, then let him give him a morsel or two, or a mouthful or two, for he has endured its heat and preparation.” (Bukhari and Muslim)

Slavery has always been an issue all over the world. As a powerless part of society, a slave is often mistreated by their masters. In the recent world, the case that involved slaves and their masters are mostly where their wages are not paid, physical abuse, and the servants were forced to work surpassing the working hours. As for woman slaves, they were often raped and sexually abused by their masters. As a human, a slave is no different from others. Despite their low social status, the servants deserve to be treated kindly and they have many rights to be fulfilled.

Here are the rights of servants in Islam:

Every people has their endurance in performing a certain task. The physical health of a servant should become a consideration for every master. A master should not burden a servant by giving a task to them that surpasses their ability. Or else, the master is violating the right of a servant. Allah says:

Living in the same house, a servant might as good as a family. Thus, they deserve to be treated as a family member. Servants are equal with their master’s brother. Masters are obliged to clothe their servants, feed them, and not to be assigned with a task that surpasses their ability. Allah says:

Treating servants with kindness means speaking to them in a good manner. Not to be cursed is included in the rights of servants in Islam. Abusive treatment of servants is highly prohibited in Islam. A servant must not be hit by their master. Any abusive behaviour toward a servant (say it physical, verbal, or sexual) is considered as violating their right to. The Prophet (peace be upon him) himself never abuse his servants.

Once a servant is committed to serving a master, they should give their best in working for them. Through their hard-working, they will be able to gain a blessing from Allah SWT and receive kindness from their masters. Allah says:

“And remember Our slaves Ibrahim and Ishaq and Ayyub, possessors (of) strength and vision.” (Surah Sad 38:45)

It has made clear what are the rights of servants in Islam. Servants could bring a master many blessings from Allah SWT if they are treated in the right way and their rights are fulfilled. Let us all try to become good Muslims by following every command from Allah SWT and Sunnah from the Prophet (peace be upon him). Allah says:

The principal feature of The Holy Prophet’s teachings is that he urges each class and individual to fulfil the rights of others with a full sense of responsibility and consider it a source of good fortune in both worlds. He, thus, enjoins upon the masters to fear Allah in respect of their slaves and servants, (by treating them fairly and kindly) and he enjoins upon the slaves and servants to be loyal and sincere to their masters.