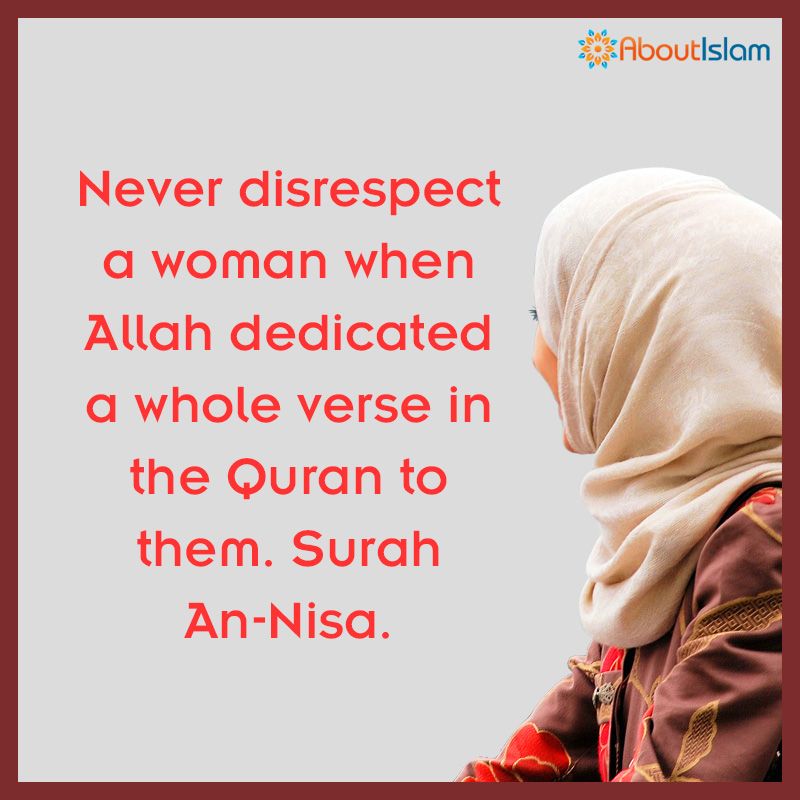 Islam does not show impartiality between men and women it does, however, recognize that are not identical both psychologically and physiologically. There has been many a misconception about the real role of women in Islam. Many view Islam as a religion that oppresses and stifles women but they couldn’t be more wrong. Most non-Muslims who are completely oblivious and ignorant about the teachings and doctrines of Islam tend to paint Islam with an oppressive brush.  Allah says:

Islam, the mercy of Allah, is for all of mankind and does not refer to sex. Men and women have a calling and a place in nature. Neither has a greater value nor is one of greater importance. Both are subject to Divine Retribution which is equal for the capacity of each. Islam’s true stance on the status of the woman is what this small treatise seeks to make clear. The Quran expounds upon this in multiple verses and exists as an illuminating miracle for those who reflect. Allah says:

“O mankind! Consciously revere your Lord the One Who created you from a soul single and created from it its mate and dispersed from both of them many men and women. And consciously revere Allah (through) Whom you ask [with it] and the wombs. Indeed, Allah is over you Ever-Watchful.” (Surah An-Nisa, 4:1)

Islam was revealed at a time when a lot of people denied the humanity of the woman; some were sceptical about it, and still, others admitted it, yet considered the woman a thing created for the humble service of the man. As a rule, Islam acknowledges the woman’s rights to all kinds of ownership, spending and channelling of her money. Allah says:

“To whomever, male or female does good deeds and has faith, We shall give a good life and reward them according to the best of their actions.” (Surah An-Nahl 16:97)

There are two reasons for this, one has to do with a natural quality and the other relates to something acquired. First, Allah has provided the man with the quality of greater strength whereas he has equipped the woman with a lighter and usually more delicate physique. Secondly, Allah has delegated the man to be the family provider. If the family collapses, he must bear the brunt of the collapse. This responsibility naturally entails deference and support. Allah says:

“And whoever does righteous deeds, whether male or female, while being a believer – those will enter Paradise and will not be wronged, [even as much as] the speck on a date seed.” (Surah An-Nisa, 4:124)

Allah Almighty says about women in the Holy Quran:

Islam considered giving women an equal entity and declared their status as a beneficial and important part of the society and did whatever possible to ensure that women experienced and enjoyed the same respect in the society as men. Women make up half of society and they are responsible for the nurturing, guidance and transformation of successive generations. It is the woman who pervades principles and faith into the souls of the nation. Allah says:

“And of everything, We have created pairs, that you may remember.” (Surah Adh-Dhariyat 51:49)

A woman is also a wife who is a source of comfort for her husband as he is to her. Women make up half of society and they are responsible for the nurturing, guidance and reformation of the subsequent generations of men and women. It is the female who imbues principles and faith into the souls of the nation. Allah says:

:O you who believe! (Let) not divert you your wealth and not your children from (the) remembrance (of) Allah. And whoever does that, then those [they] (are) the losers.” (Surah Al-Munafiqun 63:9 )

Muslim women should understand the rights and roles that Islam has given to them and then in light of those rights and roles, they must perform all the social and Islamic roles with absolute dedication and commitment. Islam is the complete way of life and a divine religion that is not lacking in any sense, let alone upholding women’s rights. Allah says:

Thus, if today’s societies have different social circumstances and traditions it is acceptable that the exercise of these rights should be gradually introduced for the society to adjust to these circumstances. More importantly, such an exercise should not lead to the violation of ethical rules laid down by the Shari’a and made binding by it. Allah says:

We completely reject the way that western society has almost completely stripped women of their morality and chastity. It is important in our Islamic Society, that the Islamic principles, morals and values are upheld with the fullest conviction, honour and austerity, in obedience to Allah, exalted be He. And all praise is due to Allah, at the beginning, and the end. May the blessings of Allah be upon His Messenger and his companions and his family.