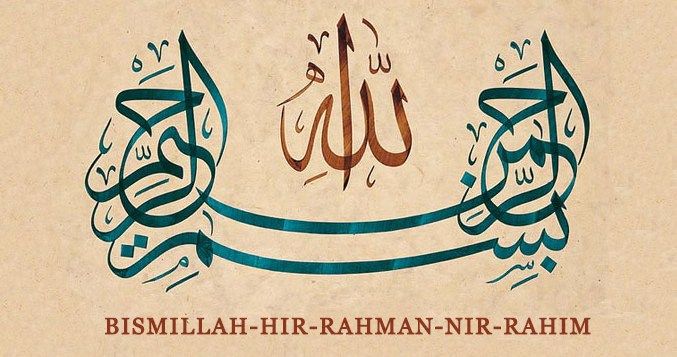 Starting any task with Bismillah makes us aware of Allah, and gives us a warning that anything we undertake must be by the will and pleasure of Allah. The Prophet (saws) told us to say bismillah before wudu, eating, wearing garments, even going to the bathroom and intimate relationships between spouses.

Bismillah ar-rahman ar-rahim: “In (or with) the name of Allah, the Beneficent, the Merciful.”

“Bismillah” is a word that served as a holy spell for every Muslim. The simple and short meaning of Bismillah is “in the name of Allah”. Bismillah holds many meanings and importance, and saying Bismillah every time brings unexpected benefits for us, Muslims. We should look up more to the importance of Bismillah in Islam, so whenever we say it, it was not out of habit but because we know the precious and special meaning behind those words. Saying bismillah is the sunnah of Prophets even before Muhammad (saws), as Allah mentioned in the Quran.

“Embark therein; in the name of Allah is its course and its anchorage. Indeed, my Lord is Forgiving and Merciful.” (Surah Hud 11:41)

We were once present in the assembly of Rasulullah Sallallahu ‘Alayhi Wasallam. Food was brought to him. 1 did not observe any food that had so much barakah at the beginning and at the end of which there was no barakah left in the food. We, therefore, asked Rasulullah Sallallahu ‘Alayhi Wasallam reason?. He replied: ‘In the beginning, we all recited ‘Bismillah’ before we began eating. Then someone, in the end, joined us and did not recite ”Bismillah’. The shaitaan ate with him’ [Shamail Tirmidhi]

Whenever we open the Holy Quran, look at the first word written on it: Bismillah. For Muslims, Quran is the ultimate guide of living in the world happily and accordingly. Moreover, the Quran also contains the complete guide in the Hereafter. If our guide in life begins with Bismillah, what is contained in it (the guide to behave and live) should also begin with Bismillah.

“Indeed, it is from Solomon, and indeed, it reads: ‘In the name of Allah, the Entirely Merciful, the Especially Merciful…” (Surah An-Naml 27:30)

Whenever our skin is ripped and blood flows through it, say Bismillah several times and blow air upon it. Bismillah has a magical advantage to cure the scars. Calling Allah’s name means that we always remember Him in everything we do. So that Allah knows and He will give His blessing to us, and anything we do will be successful and advantageous.

There is only one Almighty in Islam who is sleepless and ruled the Earth and the sky. Allah SWT, the Almighty God worshipped by every Muslim in the world. Calling His name whenever we are about to do something is proof that we are close to Allah and Allah is always near although we can’t see Him. It is the fulfilment of Allah’s first command given to the Prophet (saws):

Muslims has a strong faith in Allah SWT. We can’t see Him, but we always feel His presence that Allah is always near. Saying Bismillah is like validating those things, making our bonds with Allah tighter than ever. This is important because when we are close to Allah SWT, we are also being kept away from Shaytaan and Hell. It reminds us of the great mercy of Ar Rahman, who not just gave us the Quran, but also gave us the faculty of speech by which we can recite it.

Living in this world is just temporary, and we should rather spend it seeking Allah SWT blessing and pleasure. Allah would be pleased when His servants call his name in whatever they are doing. Upon calling His name, all the blessings would be given, and Allah would be accompanying them in every good deed started with Bismillah. Bismillah contains one name of Allah which means is merciful. The more we say Bismillah, the more Allah’s mercy come to us.