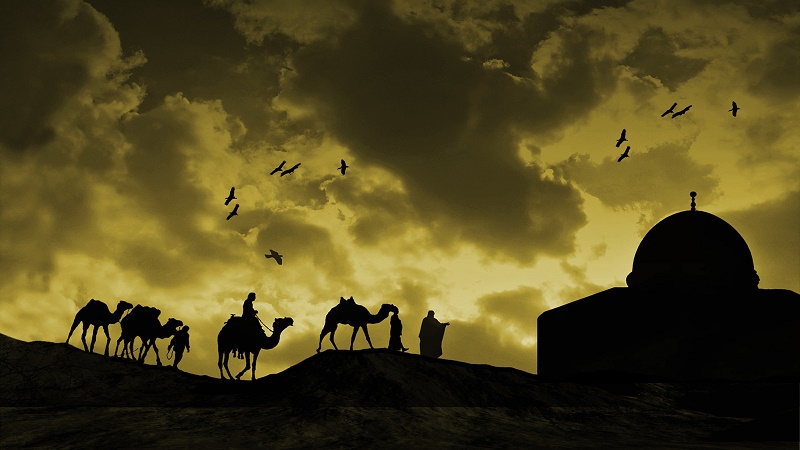 Islam has a long history and a big impact in changing the world. It was due to one of the biggest events that happened during the early rise of Islam, the Hijrah. Hijrah, Hijrah, or Hegira is a journey of Muslims led by Prophet Muhammad (SAW) from Mecca to Medina in the year 622. Hijrah happened after the Prophet (SAW) received a warning about an assassination plotted toward him. Allah says:

As Islam is the religion of dignity and authority, it was impossible to think of any Muslim submitting himself to the disbelievers; indeed it is forbidden for a Muslim to go to live amongst them and acknowledge their authority over him because his presence amongst them would make him feel weak and isolated, and, then he would become docile and apologetic before them. He would first be called upon to approve of them, and then to follow them. Allah says:

“When angels take the souls of those who die in sin against their souls, they say: “Indeed, those whom the angels take [in death] while wronging themselves – [the angels] will say, “In what [condition] were you?” They will say, “We were oppressed in the land.” The angels will say, “Was not the earth of God spacious [enough] for you to emigrate therein?” For those, their refuge is Hell – and evil it is as a destination.” (Surah an-Nisa 4:97)

But Muslims should be filled with morale and confidence, they should be leaders, not followers. They should hold the reins of power; no power should be above them but that of Allah. Therefore Muslims were forbidden to remain in countries where Islam is of no account, except when they can freely practice their religion and to observe it without any impediment, and without any fear that their presence there could damage them in any way.

Here is the importance of Hijrah in Islam every Muslim should know:

The simple meaning of the word Hijrah (migration) is to move from one place to the other and take up residence there. Today, people immigrate to other countries to make a better living: find better jobs, education, or marriage opportunities, yet, by Islamic standards, the scope is much wider. Allah says:

The reasons behind the move have to comply with Islam. Seeking a better living for self and family is indeed a great cause and it is encouraged in Islam, but it becomes greater if one leaves a place where he is restricted in practising Islam or pressured into destructive beliefs and habits and migrates to a new place where he and his loved ones could enjoy more freedom to practise Islam in a more supportive environment. Allah says:

“Indeed, those who believed and those who emigrated and strove in (the) way (of) Allah – those, they hope (for) Mercy (of) Allah. And Allah (is) Oft-Forgiving, Most Merciful.” (Surah Al-Baqarah 2:218)

In parallel, another dimension of Hijrah happens discreetly in the heart and eventually reflects on one’s behaviour and relationship with the rest of the world. During the Hijrah, every Muslim from different backgrounds and classes united and also formed the brotherhood between Muhajirun and Ansar. Hijrah displayed harmony and equality to all Muslims, as they were brothers and helped each other because of Allah SWT and Islam. Allah says:

“Then indeed, your Lord, to those who emigrated after what they had been put to trials then strove hard and were patient. Indeed, your Lord, after it, surely is Oft-Forgiving, Most Merciful.” (Surah An-Nahl 16:110)

This is the type of Hijrah mentioned in the Prophet’s statement: migrating “away from what God has forbidden” not just physically by moving to a new place, but also spiritually and ethically, by choosing good over evil and ethics over corruption, and pledging to withstand the tribulations of struggling to stay on that path for life. Allah says:

“Those who believed and emigrated and strove in (the) way (of) Allah with their wealth and their lives (are) greater (in) rank near Allah. And those – they (are) the successful.” (Surah At-Taubah 9:20)

This implies being knowledgeable and mindful of God’s commands and prohibitions in the Quran and Sunnah, being strong enough to control one’s urges, being aware of the world around us, and seeking to rise in rank in the sight of God by constantly working to be a better person and a better Muslim. Allah says:

“And those who emigrated in (the) way (of) Allah then were killed or died, surely, Allah will provide the provision well. And indeed Allah, surely, He (is the) Best (of) the Providers.” (Surah Al-Hajj 22:58)

Everyone who has some sense could understand from this fact how the sincerity of the Prophet and the goodness of the religion of Islam were captivating hearts, despite the many difficulties that people had to face when accepting Islam. They suffered separation from near and dear ones, distances from their native land, fear of torture and imprisonment. Yet, all of this could not deter people from accepting Islam.

“And have patience with what they say, and leave them with noble (dignity).” (Surah Al-Muzammil 73:10)

This is something we could all do every day, and it’s not a coincidence that the Prophet mentioned good manners –sparing people the harm of tongue and hand- in conjunction with Hijrah in this hadith. A true immigrant is an ethical, well-mannered and pious Muslim, and that is what we should all strive to be every day of our lives.