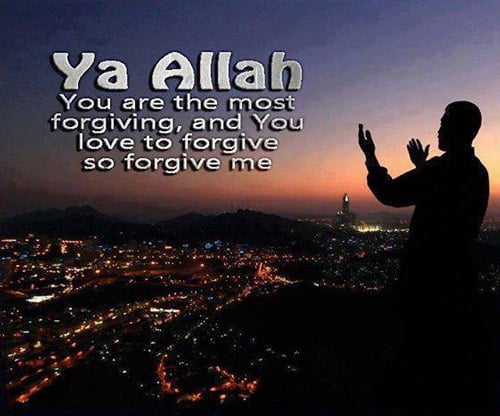 Allah SWT created us and He knows what is best for us. This is something we often seem to forget. Allah knows it can be very hard to really forgive someone who hurt you and in this ayah, we are given the greatest motivation to push ourselves to forgive; it’s Allah’s forgiveness. When we think of forgiveness we mostly think of Allah’s forgiveness and we forget how important it is that we also forgive. Allah says:

“The believers are those who spend in charity during ease and hardship and who restrain their anger and pardon the people, for Allah loves the doers of good.” (Surah Ali Imran 3:134).

“And whoever does a wrong or wrongs himself but then seeks forgiveness of Allah will find Allah Forgiving and Merciful.” (Surah An-Nisa 4:110)

The fact that you are still alive and even have the chance to seek His forgiveness happens only under the blessing of Allah. Despite all the sins you have committed and violations of Allah’s faith, He still showered you with many blessings. Ask for His forgiveness because He still loves you even when you have disobeyed.

Here are some important benefits of forgiveness in Islam:

Seeking forgiveness from Allah can’t be done only by one or two prayers, but continuously and endlessly. It could be long and tiring, but you don’t have any other hope than Allah’s mercy. People do sins because they have diverged too far from Allah’s guidance. Reflect deeply on your sins and think again about why you did the sin and how the sins affected your life and everyone around you.  Allah says:

“Indeed, Allah (does) not forgive that partners be associated with Him, but He forgives other than that for whom He wills. And whoever associates partners with Allah, then surely he has fabricated a sin – tremendous.” (Surah an-Nisa 4:48)

We need to remember both, because if we don’t forgive we do wrong in our relationship with Allah as well as in our relationships with each other. Every people committing sins, you don’t have to think low about yourself. Allah loves those who acknowledge their mistakes. Be sincere and ask for forgiveness from Allah sincerely, not because people told you to. Allah says:

There are a lot of people whom we see are better than us religiously, and we tend to seek their advice about the sin we committed. Upon discovering your sin, there will be many people who will guide you to seek Allah forgiveness with good intention. But never repent just because many people told you to. It wouldn’t have any effect unless it comes from your deepest heart.

Allah indeed forgives those who repent their sins. But it doesn’t mean you can repeat the same sins and ask for forgiveness again. Upon seeking forgiveness from Allah, make sure to yourself that you will never repeat the same mistake no matter what. Allah’s guaranteed forgiveness, but only for those who are sincere and never take the same wrong path again. Allah says:

“Whether you reveal a good act or keep it hidden, or pardon an evil act, Allah is Ever-Pardoning, All-Powerful.” (Quran, 4: 149)

Sometimes people think that doing bad deeds bring more good in their life than doing good ones. You may find yourself struggling after tawba, but have faith that tawba will lead you to a better life. Tawba has many benefits to your life such as paving your way to success, pleasing Allah and helping you gain your conscience again. Allah is merciful and forgiving His servant’s sins even when it’s as many as the foam in the sea. Allah says:

Indeed, Allah does not forgive that partners be associated with Him, but He forgives [what] other than that for whom He wills. And whoever associates partners with Allah then surely he lost (the) way, straying far away.” (Surah An-Nisa 4:116)

A Muslim is to think better of Allah. No denying the fact that Allah is Mighty, Just and Wrathful, however, at the same time He is Merciful and forgiving. Upon seeking forgiveness from Allah, you can’t let your heart doubt whether you will be forgiven or not. Allah says:

“My Lord, forgive me and my brother and admit us into Your mercy, for You are the most merciful of the merciful.” (Surah Al-Aaraf, 7:151)

Seeking Allah’s forgiveness can be done not only when you are performing Salah and the dua after that. Use Allah’s name as dhikr all the time. Allah has many names, and the ones suitable for seeking forgiveness are Al-‘Afuww, Al-Ghafoor, and Al-Ghaffar. Focus on doing good deeds since it can erase bad deeds. Allah says:

“That is so. And if anyone inflicts an injury the same as the one done to him and then is again oppressed, Allah will come to his aid. Allah is All-Pardoning, Ever-Forgiving.” (Surah Surah Al-Haj)

The best way to seek forgiveness from Allah is by fulfilling your duty to Him. Pray with the most sincerity and consistently. Emphasize this opportunity by asking for his forgiveness over and over again during your prayer after Salah, as if Allah has not forgiven you. Not that you doubt Him, but to prove that you are repenting. May Allah give us the strength to forgive others and also ask forgiveness from them.