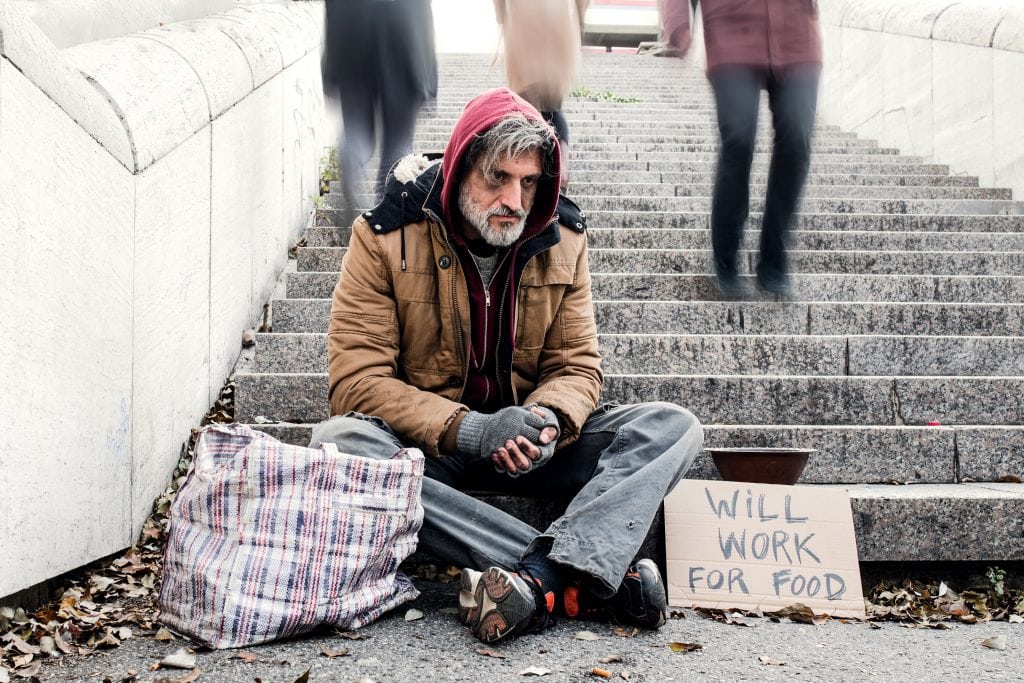 Begging has many reasons, such as poverty, family disintegration, begging as a profession, physical disabilities and quick material gain. The Religion of Islam puts great emphasis on making effort and earning one`s own living rather than going out ask others for it for no reason. It also devises a well balanced Muslim society for all where everyone gets their due share. Those who are rich are directed to help out others in need through an obligatory action of Zakah (Charity). Allah says:

“If you give charity openly then what a good thing it is; and if you give to beggars, hiding it is better for you than everything, and He will remove some of your sins. And Allah is Aware of what you do.” (Surah Al-Baqarah 2:271)

Islam has forbidden begging, and Islam has developed ways to address this phenomenon. Helping those in need and supporting those in distress is a way of thanking and praising Allah.  A deprived individual is the one who does not make his current situation of scarcity public in front of others and avoids pleading for the fulfilment of its requirement from others. Allah says:

“who, when they spend, are neither extravagant nor miserly but keep the golden mean between the two (extremes).” (Surah Al-Furqan 25:67)

Among many signs of a true believer is that it never complains in front of the Almighty Lord, remains thankful to Him and always maintains a state of self-satisfaction with whatever it has got. This is because a rightful disciple of Islam knows about the temporariness of life on earth which leads to its contentment with everything Allah has bestowed upon it throughout its existence. Allah says:

“Verily, those who had faith and had done righteous deeds will have gardens beneath which rivers flow. That is a great achievement.” (Surat Al-Buruj 85:11)

Begging is asking people for charity using different methods to generate kindness and compassion or pretending to perform a particular service for the purpose of making money. Allah has instructed the prosperous ones to help them with Zakah as they will conceal their misery through patience but they are the ones who are actually in need of Charity.

The Phenomenon Of Begging And Its Treatment In Islam Comparative Study Of Religions:

Therefore, anyone who has enough capacity that it can take care of his own issues should never ask others for affluence rather it should go out, become self-determining and make a living on its own so that it might even be able to aid others. In the end, Rasulullah ﷺ has regarded the charitable person as being superior to the one that is being contributed. It means one should continue the good work of making donations to the poor for the sake of pleasing Allah. Allah says:

“And establish prayer and give zakah and bow with those who bow in worship and obedience.” (Surah Al-Baqarah 2:43)

Islam has strictly forbidden from asking others for money or any other riches rather one has to earn its income by its own effort. It shows that a believer is not allowed to keep away someone just because that person is asking for a favour. This is because one does not actually know about the actual reason of the beggar behind its request. Thus, one should treat them in a pleasant manner, give them charity and avoid offending them. Allah says:

“The charity you give shall go to the parents, the relatives, the orphans, the poor, and the travelling alien.” Any good you do, God is fully aware thereof.” (Surah Al-Baqarah 2:215)

First of all, begging is a very bad way of earning money in Islam. The world in which we all live today is a highly unjust place where the rich are getting richer and the poor and getting poorer to the point of committing suicides and all of this is simply due to the fact that the world today is being governed by a broken financial system.

Islam has imposed the Zakat, a pillar of Islam and an obligatory practice for those that can afford it. In zakat, a portion of the wealth is required to be distributed among the poor and the needy which will not only help them but will allow the wealth to regulate evenly and accordingly within a society. It is the duty of a Muslim to give food to the poor and to offer the one who asks for something. Allah says:

Helping the poor and needy people is a good deed and a noble aim. Asking for material goods from the rich is not allowable if this act is being done just for the sake of accumulating wealth for personal gains. This kind of deed is strictly prohibited by the Holy Prophet ﷺ for it is only a source of collecting money for quenching one`s thirst of greed. Allah says:

“You shall not attain righteousness until you spend out of what you love (in the way of Allah). Allah knows whatever you spend.” (Surah Al-Imran 3:92)

Thus it shows that Islam is not a rigid religion on the matter of asking others rather it gives enough room for it when there is no other way of survival. Begging is not a desirable action according to the Religion of Peace but only allowed in severe forms of need. The rich also have the responsibility to search for such deprived people to help them through charity in order to relieve them from their misery.