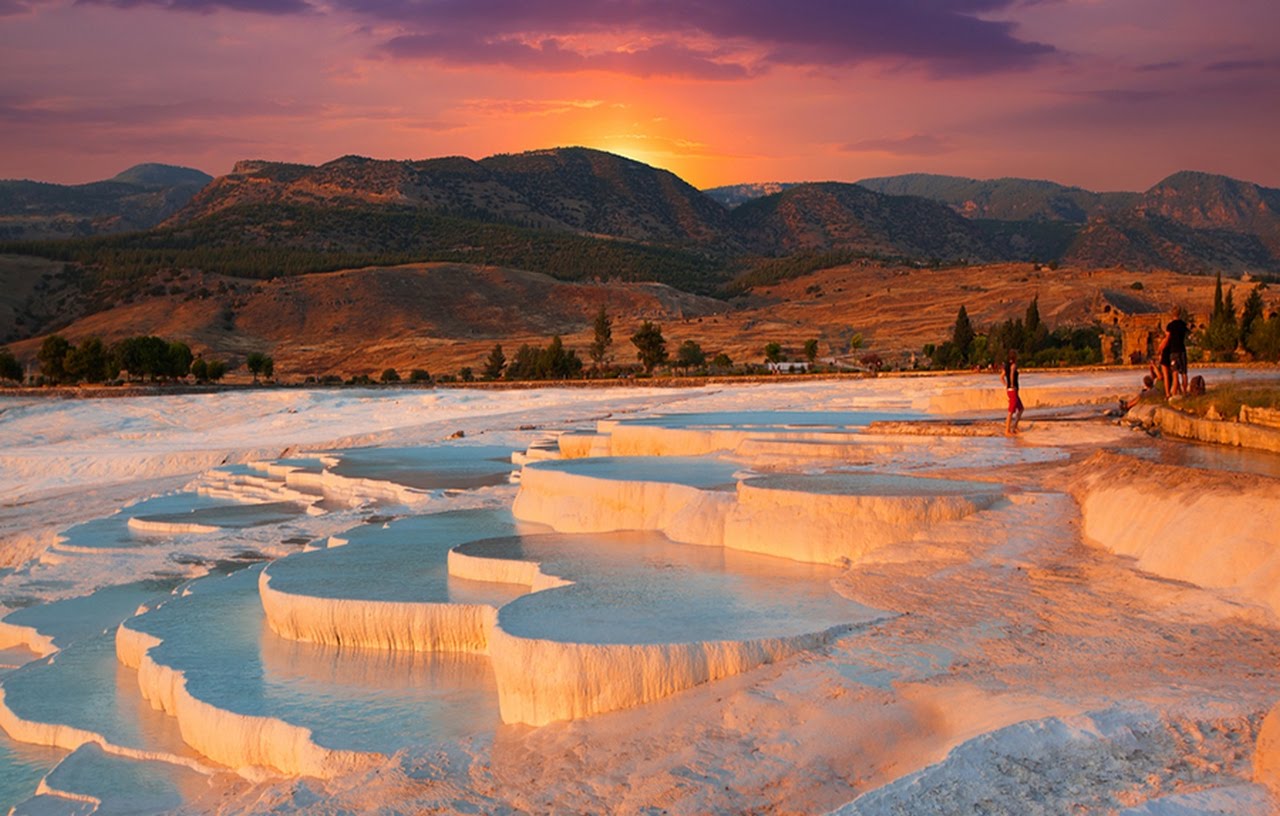 Pamukkale is a town in western Turkey known for the mineral-rich thermal waters flowing down white travertine terraces on a nearby hillside. It neighbors Hierapolis, an ancient Roman spa city founded around 190 B.C. Ruins there include a well-preserved theater and a necropolis with sarcophagi that stretch for 2km. The Antique Pool is famous for its submerged Roman columns, the result of an earthquake.

The surreal, brilliant white travertine terraces and warm, limpid pools of Pamukkale hang, like the petrified cascade of a mighty waterfall, from the rim of a steep valley side in Turkey’s picturesque southwest. Truly spectacular in its own right, the geological phenomenon that is Pamukkale, literally “Cotton Castle” in Turkish, is also the site of the remarkably well-preserved ruins of the Greek-Roman city of Hierapolis. With such a unique combination of natural and man-made wonders it’s little wonder that Pamukkale-Hierapolis has been made a Unesco World Heritage site. With over two million visitors annually, it is also Turkey’s single most visited attraction.

As every mysterious place in the world, Pamukkale has a strong legend that makes the place even more appealing. People believe that back in the days, there was a Turkish young girl that no one wanted to marry because she was ugly. Depressed, the girl tried to commit suicide throwing herself off the travertine. She fell into a natural pool and survived the fall. The water in the pool turned her into a beautiful girl who caught the attention of the Turkish lord Denizli while he was passing by the place. He fell in love with the girl and decided to marry her. That is why people nowadays believe that in addition to the health benefits, the rocks in Pamukkale can make you more beautiful.

There are 17 hot springs in Pamukkale with temperature ranging from 35 degrees to 100 degrees. The water, once emerging from the spring, is then transported 320m to the head of thee terraces where it deposits calcium carbonate. Once the water reaches the surface, carbon dioxide is de-gassed and the result is deposition of calcium carbonate. The deposition continues until the carbon dioxide in the water and in the air is balanced. Calcium carbonate is deposited as a soft jelly, but in the travertine the carbonate hardens.

Alternatively comfortable inter-city coaches run to Denizli, the nearest city to Pamukkale, from all the aforementioned places and take around the same time as driving. Frequent buses and minibuses make the 40 minute run between Denizli’s bus station and Pamukkale. Turkish Airlines (turkishairlines.com) and Pegasus (flypgs.com) both fly to Denizli’s Cardak airport from Istanbul. Rail buffs might be interested in the four times daily service between Izmir and Denizli, via Selcuk.

The best way to approach the ancient site is to walk up through the formations on the travertine path, starting at the south gate to the site. You are not permitted to wear shoes or even sandals to do this (to prevent eroding or staining the delicate calcite deposits) so bring your footwear (and everything else you’ll need for exploring the ancient ruins) along in a bag. Wearing swimwear allows you to splash in the warm, aquamarine pools en-route, and later swim in the antique pool at the top of the terracing. Allow the whole day to make the most of the travertines, pools and remains – bring a picnic lunch (and plenty of water/suncream etc in mid-summer).

Pamukkale was a local destination in Turkey, and not many people outside of the country knew the benefits of the water. But then the local authorities decided to market and develop Pamukkale as a spa center. Motels were razed and the land became clear, the road up the slope was converted into pools, and visitors were allowed in them to walk, play, splash and even soak.