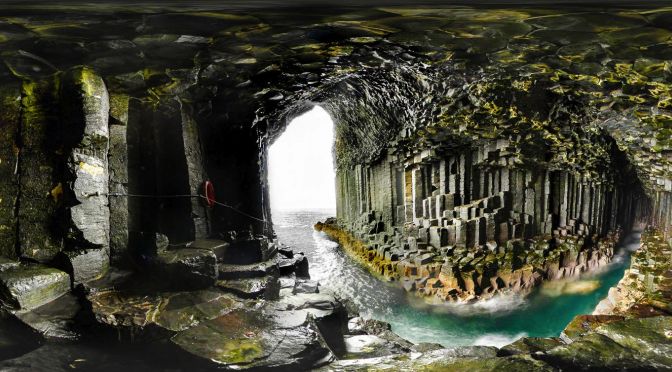 Fingal’s Cave is a sea cave on the uninhabited island of Staffa, in the Inner Hebrides of Scotland, part of a National Nature Reserve owned by the National Trust for Scotland. It became known as Fingal’s Cave after the eponymous hero of an epic poem by 18th-century Scots poet-historian James Macpherson.

Fingal’s Cave, on the island of Staffa off the west coast of Scotland (near Mull and Iona), is a sea cave formed within Tertiary basalt lava flows which have cooled to form hexagonal columns (like those of the Giants Causeway in Northern Ireland). There is a path in on one side which involves stepping from the top of one column to the next. The cave stretches 250 feet in to the rock and its roof is 70 feet above the sea. Fingal’s cave was the inspriration for Mendelssohn’s Hebridean overture.