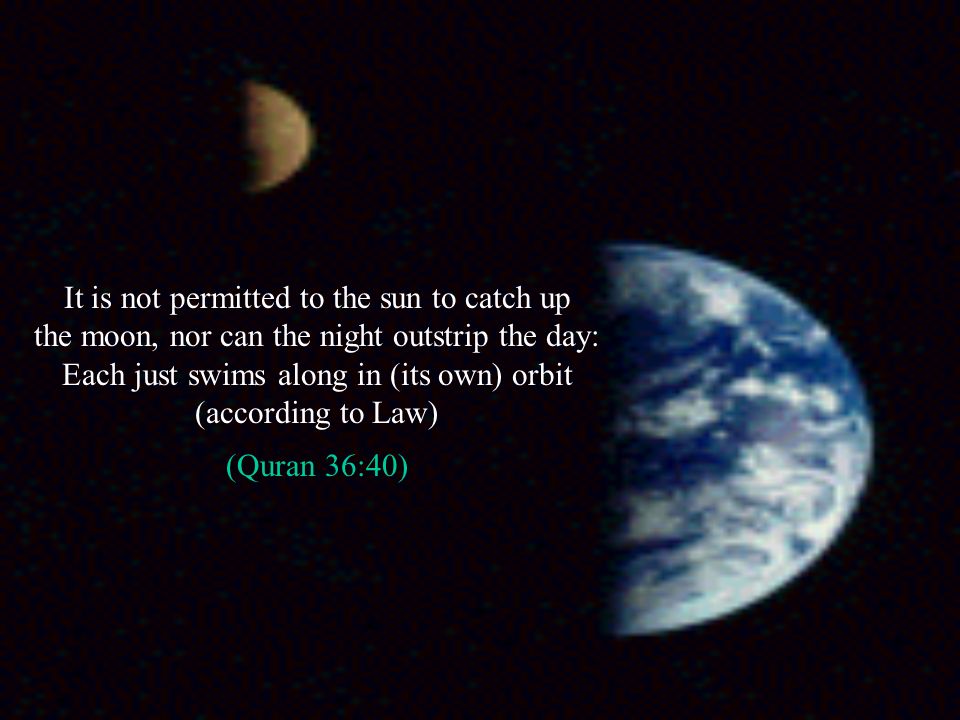 If we record earth rotation in a movie and we play it in forwarding speed, we will see as if a night is trying to catch day but it (night)couldn’t precede or to be at the head of it(day). Allah seeks to tell his creation by mentioning in the Quran about the falling of night and the coming of day that He alone is in control and no other being is with Him helping him do so. The heavens and the earth are all His creation and He alone has the power to bring about the night after day. Allah says:

“It is He who gives you life and death, and His the alternation of night and day. Even then you do not understand.” (Surah Al-Mu’minun 23:80)

Quran becomes the greatest book that explains to us how much Allah is in control and how humans cannot do anything unless Allah gives them the power to do so. Allah says in the Quran that not a leaf falls from the tree except that He knows of it. He also says that humans cannot even create the wing of a fly. Allah says:

For many centuries, people believed that the earth is flat with no idea that the earth is spherical. But the Holy Quran told us about this cosmic reality when God described this phenomenon by using the word. Because of the continuous movement of the earth and if the sun is not existed to ensure needed light for the day also without the spherical shape of the earth, the “night and day rotation phenomenon “Wouldn’t happen.

Night swim along in space

“Verily your Lord is Allah Who created the heavens and the earth in six days, then established Himself on the Throne, making the night cover the day, seeking it swiftly, and created the sun and the moon and the stars subjected to service by His command. Lo! His is the creation and the command. Blessed is Allah, the Lord of the worlds.” (Surah Al-A’raf 7:54)

Night and day overlap along a circle that surrounds the earth in an area where sunset happens on one side and sunrise happens on the other side. Allah says:

The overlap area is not straight or tortuous but it is in the shape of a circle that surrounds the earth. The word roll means that night goes into a day in a circular shape like a ball. This verse is a sign that the earth is spherical.

The importance of daytime for the continuation of life on earth:

Daytime, sunlight and its heat and radiations are the most important factors which Allah subjected so life can continue on our planet. Thus, when green plants are exposed to sunlight it transfers the energy of light into chemical energy formed as bonds in the sugar substances this process is called “photosynthesis” also water and carbon dioxide are important components in this process. Photosynthesis is the basic source of almost all energies on earth and food substances, and if it hadn’t been for light this process wouldn’t exist and all means of life would vanish. Allah says:

“He created the heavens and the earth in [the] truth. He wraps the night over the day and wraps the day over the night. And He subjected the sun and the moon, each running for a term specified. Unquestionably, He (is) the All-Mighty, the Oft-Forgiving.” (Surat Zumar- 38: 5)

The separating area between night and day

The area which separates night from day appears as a thin thread that separates darkness from light. This verse tells us about a separating area and the dawn in the middle between both of them. Allah says:

The night covers the day

If we look from outside earth, it is seen that night coves day. Also, we can see that the earth is surrounded by darkness from all sides. If we record earth rotation in a movie and we play it in forwarding speed, we will see as if a night is trying to catch day but it (night)couldn’t precede or to be at the head of it(day). Allah says:

The importance of night for the continuation of life:

Even though most of the important biological processes take place in the daytime, millions of them are at night. Scholars divided photosynthesis reactions into light reactions which happen only in the existence of light, dark reactions which take place at night and don’t need light.

The alternation and its effect on life:

The differentiation between daytime and night in length, brightness, darkness, warmth, and coldness are important factors for life. For instance, in flowering plants, neither fruits nor seeds will grow if flowers haven’t, and these flowers don’t grow on any plant unless it has a chemical biological substance called” flowering hormone” which leads to the flowering process. Allah says:

This substance is formed only by the alternation of light and dark and their intensity and length; in fact, God has created in the kingdom of plants those which need daily darkness until they flower, thus they are called” long night plants” on the contrary, there are others which need light” long daytime plants. Allah says:

“And those who (do) not bear witness (to) the falsehood, and when they pass by futility, they pass (as) dignified ones.” (Surah Al-Furqan 25:72)

For example, on an overcast day when you cannot see your shadow, there is no direct radiation reaching you, it has all been scattered. As another example, due to a phenomenon called Rayleigh scattering, shorter (blue) wavelengths scatter more easily than longer (red) wavelengths. This is why the sky looks blue, you are seeing scattered blue light. This is also why sunsets are red. Because the Sun is close to the horizon, the Sun’s rays pass through more atmosphere than normal to reach your eye. Allah says:

“Indeed, your Lord (is) Allah the One Who created the heavens and the earth in six epochs, then He ascended on the Throne. He covers the night (with) the day seeking it rapidly and the sun and the moon and the stars – subjected by His command. Unquestionably for Him (is) the creation and the command, blessed (is) Allah, Lord (of) the worlds.” (Surah Al-A’raf 7:54)

Much of the blue light has been scattered out, leaving the red light in a sunset. Earth moves around itself and the sun in a very organized manner with no defect which may cause a disturbance in timing or night and day alternation. Allah says:

“It is not for the sun to overtake the moon, nor does the night outstrip the day. They all float, each in an orbit.” (Surah Ya-Sin 36:40)

Being that can manage the Universe and every living thing that it contains is no doubt worthy of our worship. So read the Quran and learn the powers of Allah Subhanwatallah. Know that He alone is the Creator, Manager and so much more of the Universe and He alone can bring about the day so that you may go to work and He alone brings about night so that you may go to sleep. And know that Allah never sleeps. Be it night or day. Allah says:

“Verily, in the creation of the heavens and the earth, and the succession of night and day, there are indeed messages for all who are endowed with insight.” (Surah Al-Imran 3:190)