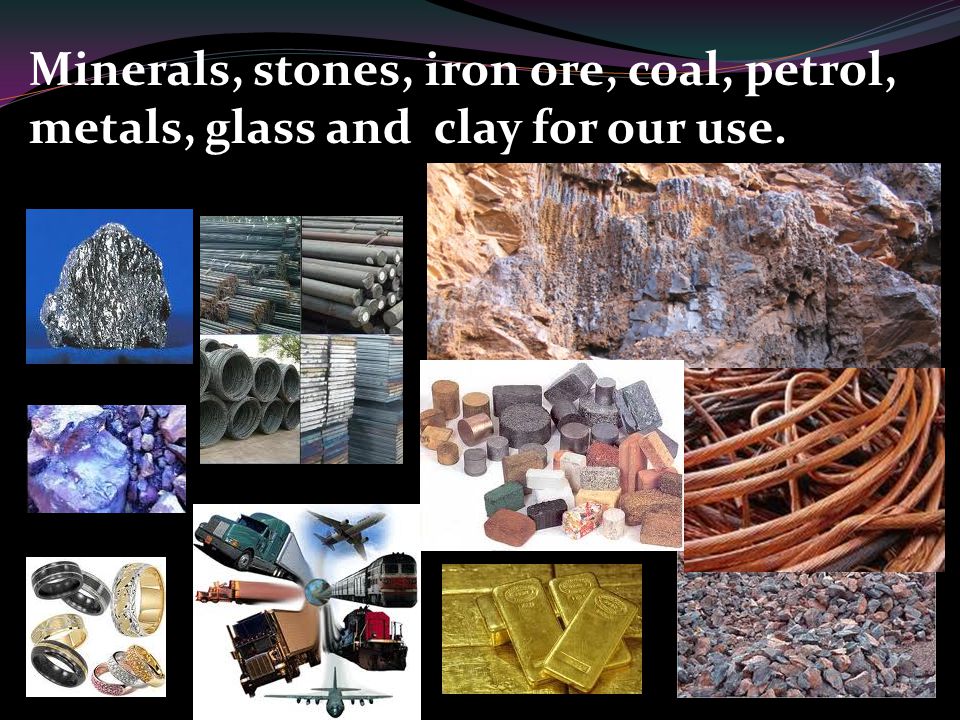 The primary purpose of the Quran is to guide mankind to Allah so that they will affirm His Oneness and worship Him alone, and attain His Paradise and His pleasure. The Quran is not a book of science, medicine or astronomy, even though its verses may contain a little of such things. Allah says:

“Will be circulated for their plates of gold and cups. And therein (is) what desires the souls and delights the eyes, and you therein will abide forever.” (Surat Az-Zukhruf 43:71)

Hence the Muslim should not let himself be distracted from the greater purpose of reciting the Quran and look for the number of stones or rivers or kinds of animals mentioned therein. Allah says:

More than 3,500 different minerals have been discovered so far. Most of them combine to form rocks, like quartz, feldspar, and mica found in granite. … This family of minerals, called gems, groups together some 50 different semiprecious stones, including agate, opal, and jade, and four precious stones.

Copper in the Glorious Quran:

Copper is a chemical element with the symbol Cu and atomic number 29. It is a soft, malleable, and ductile metal with very high thermal and electrical conductivity. A freshly exposed surface of pure copper has a pinkish-orange colour. Copper is explicitly mentioned once in the Glorious Qur’an, and implicitly twice. Allah says:

Copper was the hardest of these metals, and the most widely distributed. It became one of the most important metals to the ancients. Eventually, humans learned to smelt metals such as copper and tin from ore, and, around 2500 BC, began alloying the two metals to form bronze, which is much harder than its ingredients. And need not to be repeated here. Allah says:

“And to Sulaiman, the wind – its morning course (was) a month and its afternoon course (was) a month, and We caused to flow for him a spring (of) molten copper. And [of] the jinn who worked before him by the permission (of) his Lord. And whoever deviated among them from Our Command, We will make him of (the) punishment (of) the Blaze.” (Surah Saba 34′:12)

It is produced in abundance as a result of fusion in high-mass stars, where the production of nickel-56 (which decays to iron) is the last nuclear fusion reaction that is exothermic, becoming the last element to be produced before the collapse of a supernova leads to events that scatter the precursor radionuclides of iron into space.

These verses confirm recent observations in open seas and oceans that marine water is classified both horizontally and vertically into bodies with different psycho-chemical characteristics, and hence life forms and sediments. Allah says:

“O you who believe! Indeed, many of the rabbis and the monks surely eat (the) wealth (of) the people in falsehood, and hinder from (the) way (of) Allah. And those who hoard the gold and the silver, and (do) not spend it in (the) way (of) Allah, [so] give them tidings of a punishment painful.” (Surah  At-Taubah 9:34)

This is simply because both corals and pearl oysters are marine water dwellers, although some pearl oysters can live in freshwater. This is simply because corals are exclusively warm, shallow-water, marine inhabitants. The Quranic precedence with this scientific fact that was only discovered in the last few decades of the 20th century can testify to the divine purity of the Glorious Qur’an and the correct prophethood of the noble messenger who received it.