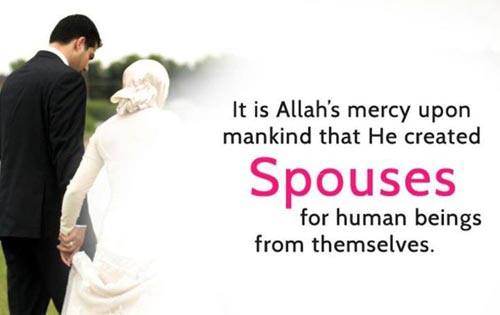 Marriage in Islam is considered a sacred bond. In Islam, there is a contract called ‘Nikah’ which is signed between a husband and wife to tie them into a beautiful relationship of marriage. Allah SWT Himsed mentioned in the Quran that spouses should find tranquillity from each other. Staying true and honest to your spouse nourishes the relationship. Allah says:

“O Adam, live with your wife in Paradise and eat from wherever you will but do not approach this tree, lest you be among the wrongdoers.” (Surah Al-A’raf 7:19)

Marriage in Islam has been given great importance. A Muslim can have a family through a legal contract called ‘Nikah.’  Marriage is an act pleasing Allah Almighty because it is by his commandments that husband and wife love each other and help each other to make efforts to continue the human race and raise their children to become true servants of Allah.  Allah says:

“The believers say: Our Lord, grant us from among our wives and offspring joy to our eyes and make us an example for the righteous.” (Surah Al-Furqan 25:74)

Allah has made the spouses clothing for each other and in this way has made men and women halal for each other. Islam gives great importance to marriage. It is advised to respect each other’s spouses and we treat them with honour and care. Allah in the Quran has laid down the rules to have a peaceful married life by fulfilling each other’s rights and responsibilities. Allah says:

Allah created mankind in pairs, Allah here also decrees that the abominable woman will be paired with the abominable man. The relationship between husband and wife is a sacred one. It can be nourished through friendship and trust. A husband should make his wife feel comfortable at his house and develop a friendship with her.  Friendship and trust are the main ingredients for a happy married life.  Allah says:

“You will never be able to do perfect justice between wives even if it is your ardent desire, so do not incline too much to one of them to leave the other hanging…” (Surah An-Nisa 4:129)

Islam emphasizes marriage as it has great importance in Islam with many benefits that one could get from it. The husband should never raise his voice or hand on his wife as Islam encourages to treat the wife with respect and love. Appreciation is the key to having a good relationship with anyone. Being honest with one’s spouse is the key to a happy marriage.

Islam defined matters that contain good benefits both in this world and in the Hereafter and among the greatest benefits of marriage are listed below:

True marriage to get us to know each other and help each other. Any Muslim who is capable of giving birth and inner living should be hastened to marry. Marriage aims to maintain self-respect and views and avoid slander. Care is the most important factor to nourish any relationship. Caring about the feelings of people can make a place in their hearts. Similarly caring about the feelings and emotions of your spouse will develop love. Showing empathy results in a stronger bond than before. Allah says:

Islam also asserts that in marrying someone, the one thing that should be considered above everything else is the character and righteousness of the person. Marriage in Islam teaches both men and women to stay ready to sacrifice and endure for/her life partner. The main purpose of marriage is protection against a sinful life and living a life according to the teachings of Islam.

“The most complete of the believers in faith are those with the best character, and the best of you are the best in behaviour to their women.” (Sunan At-Tirmidhi 1162)

Marriage is one of the Sunnah of the Messenger of Allah. Any Muslim who does will have a great reward. Young Muslims and young women who are married to distance themselves from the forbidden things are one of the classes that God will help in the afterlife. They’re a match made in heaven by Allah SWT so they should seek peace and happiness from their spouse only. Allah says:

“Live with them in kindness, for if you dislike them, then perhaps you dislike something but Allah has placed therein much good.” (Surah An-Nisa 4:19)

The purpose of marriage is to have offspring. Support is very important to face any obstacle and hurdles in life. A husband and wife should be supportive of each other. A husband should lend his support whenever his wife faces any problem related to the house or her work. Similarly, the wife is also encouraged to support her husband emotionally or physically in hard times.