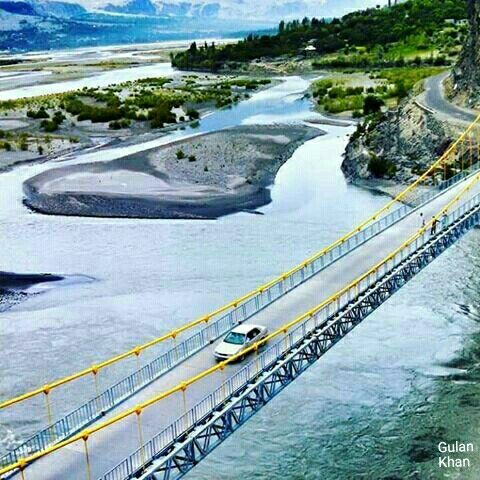 The Ishkoman River joins the Gilgit River at Gakuch. The Ishkoman valley, running north to south to join Gilgit, separates the Karakoram mountain range from the Hindu Kush. Incorporated into Pakistan in 1972, Ishkoman was vassal principality of Chitral in recent centuries and the ex-Raja of Ishkoman still lives at the capital, Chatorkhand. Most people speak Khowar, Shina, and Wakhi. It is about 100 kilometers to Chatorkhand, reach the Ishkoman valley turnoff, after 68 kilometers,

From Chatorkhand public transport goes up the east side of the Ishkoman River through Pakora to the road head a limit. It takes three and a half hours to drive from Gilgit to Imit and Ishkoman. There are five possible treks from the Ishkoman River through Pakora across the 4,600-meter Naltar Pass, 55 kilometers long, Chipursan valley, Koz Sar 6,677 meters, Chillinji Pass 5,291 meters and Karumber Pass 4,343 meters. The Ishkoman Pass is well used by locals going to Darkot or upper Chitral, but the route is narrower, higher, less scenic and less populated than the Asumbar Pass.

Just below Imit, the Karambar River joins the Ishkoman River. Many Gujars, migrants from Indus Kohistan, have moved into the Ishkoman Valley. Imit and Bar Jungle Villages are predominantly Wakhi. Khowar is also widely spoken in Ishkoman, Imit and Bar Jungle. The two east-west passes, the Punji Pass (4680m) and the Asumbar Haghost (4560m) link the Yasin and Ishkoman valleys.