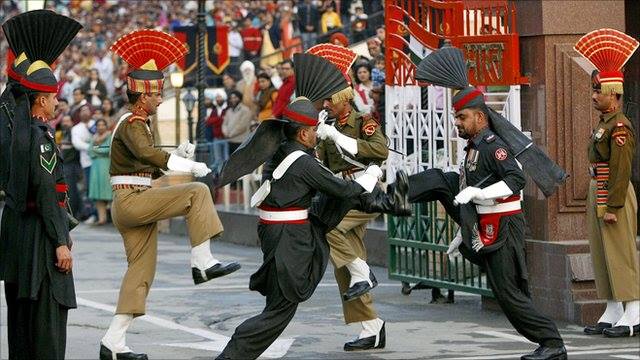 RARELY, even by the tortured standards of the Pakistan-India relationship, has there been as much farce and confusion surrounding the now cancelled talks between the national security advisers of Pakistan and India.

The dual news conferences yesterday of National Security Adviser Sartaj Aziz and Indian Foreign Minister Sushma Swaraj had made the late-night cancellation by Pakistan a mere formality. While it was obvious that neither side wanted to be seen to officially call off talks, it was also patently clear that neither side was willing to do much to rescue them in Delhi.

That the Indian government reacted so angrily to what was to have been a fairly innocuous and standard meeting between a visiting Pakistani leader and representatives of the Hurriyat Conference is perhaps a sign of Prime Minister Narendra Modi’s true intentions. He does not really want dialogue with Pakistan, but does not want to be seen rejecting talks outright in front of the international community.

Yet, for all the Indian obstinacy, there have been some serious errors by the PML-N government in Pakistan. To begin with, what was the understanding in Ufa, Russia, that led to Prime Minister Nawaz Sharif and Mr Modi issuing a joint statement? Did Mr Sharif mention the Kashmir dispute or bring up the composite dialogue? If not, why not?

Then, there was the statement itself – initially welcomed by many, including this newspaper, as an unexpected breakthrough, but pounced on by hawks in Pakistan for its so-called pro-India stance. That terrorism was made central to the upcoming round of talks without any mention of the broader Kashmir issue appeared an error on Prime Minister Sharif’s part. At the very least, the government should have expected the domestic backlash and prepared for it. Instead, the government seemed to have been caught unawares and quickly found itself under intolerable pressure.

Then came the next error: seemingly reversing itself on Ufa and demanding that the Indian government talk about Kashmir too. That elicited a predictable response from the Indian government in the form of an angry denial that the Ufa agreement had been about broader issues and a rejection of the Pakistani attempt to include Kashmir in the agenda. Finally, without a full-time foreign minister, the talks switched to being conducted at the NSA level, an awkward fit for full-spectrum dialogue and the Kashmir dispute.

Perhaps what is truly discouraging is the trend that has become apparent in the Sharif-Modi era. The prime ministers themselves mostly have encouraging words about the bilateral relationship, but they allow their underlings to damage goodwill and trust. Mr Modi in particular seems not to have a clear Pakistan policy at all. How does refusing to talk to Pakistan address any of the concerns that India has? But Mr Sharif needs to demonstrate stronger leadership internally too. How can a three-term prime minister find himself in a self-created bind?