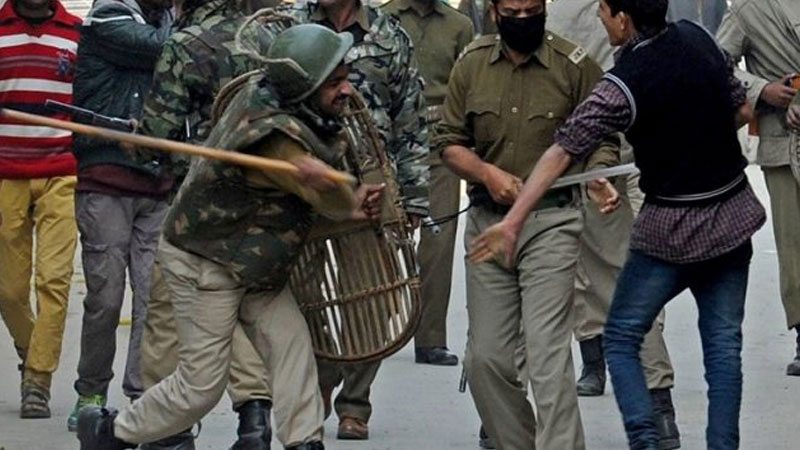 THE situation in Kashmir is fast deteriorating, politically and militarily. One of its most respected journalists, Yusuf Jameel, reported on July 30 that “dozens of Kashmiri youth, mostly in the 17-24 age group, are joining the ranks of militants every month, a phenomenon that has set alarm bells ringing in the corridors of power, particularly the security agencies.”

Most of them have witnessed close family members, friends or neighbours picked up by any of the agencies only to ‘disappear’ or be found dead later. This is apart from the continuing humiliation of army presence for 25 years. According to figures published by the state police, the total militant presence in Jammu & Kashmir is 142, of whom 88 are locals and 54 foreigners. There are 60 militants in south Kashmir; 13 in central Kashmir and 69 in the north.

Protests are triggered off by any event that is related to a resistance movement. One Friday, 17 July, began as an expression of solidarity with Palestine and soon transformed into an anti-India demonstration. Conversely, any moves for conciliation between India and Pakistan arouse high hopes. This is true of all — the separatists and the unionists, alike. That is why the foreign secretaries’ joint briefing at Ufa on July 10 came as a bitter disappointment. It did not mention Kashmir.

There is little attempt to understand the obvious message which the surge in militancy sends out. A frozen state of denials prevails, as it has all these years. On the ground, the security forces show little sign of respect for the populace.

On July 21, that most faithful of the faithful, former chief minister Farooq Abdullah, disclosed at a public meeting in New Delhi that an army officer had ordered his troops to shoot his son, Omar — also a former chief minister — on the Jammu-Srinagar highway merely because his vehicle overtook an army convoy. He cited another instance. A man was killed in cold blood by an army man. But he was never prosecuted because of the blanket immunity the army enjoys under the Armed Forces Special Powers Act, 1990. The immunity extends even to killing.

In a scathing editorial on July 25, the New York Times said: “Rather than help quell revolt, AFSPA has hardened resentments against a military that has too often abused the extraordinary powers conferred by the Act. The Act, which can be activated by the federal government or the states, gives soldiers wide powers to kill, arrest, search an detain. It also grants them civil immunity from prosecution and punishment. India’s army, which is empowered to try soldiers in military courts for crimes against civilians, has rarely done so. The result is a shocking incidence of rapes, murders, torture, summary detention and disappearances of civilians in areas where the law applies.”

The harsh truth is that none of the Unionists — the two Abdullahs and current Chief Minister Mufti Mohammad Sayeed — cares one bit for the people. Their sole concern is with pelf and power for which they will stoop to any depths to secure New Delhi’s support. After the elections to the State Assembly last December, Omar Abdullah was all too willing to win the BJP’s support. But the Mufti pipped him to the post. Former RAW Chief, A.S. Dulat, has disclosed that “Prior to the parliament election, Mufti had sent Dilawar Mir, a former minister, as his emissary to meet Modi in Ahmedabad. The PDP suits the BJP as a soft separatist; in the BJP’s way of thinking, if it can deal with Mufti then why does it need to deal with Mirwaiz? Mufti is a nationalist.”

Mufti’s PDP, which assumed office in a coalition with the BJP on March 1, performs and is seen by the people to perform to a script written by New Delhi. A couple of conciliatory steps which the Mufti took were reversed within a couple of days, to wit the release of Masarat Alam, a separatist close to Geelani, and a circular of March 12 on the display of the state’s flag. The constitution of Jammu and Kashmir itself accords recognition to the flag. But the Mufti does not risk incurring New Delhi’s displeasure.

It is unrealistic to ignore the political factor in the renewal of militancy. The militants have been disgusted by Mufti’s betrayal. But they are also disillusioned by the conduct of the Hurriyat’s leaders. They bickered even before the Hurriyat split and do so now with greater zeal after they parted company over a decade ago. They have no coherent policy bar slogans of self-determination and the like. Their sole weapon is the hartal which entails economic loss to their own followers. Except for Mirwaiz Umar Farooq, none of them concerns himself with the problems which beset the people in their daily lives. The youth have watched all this for years. Now they seem to have decided to chalk out their own path.
By A.G. NOORANI