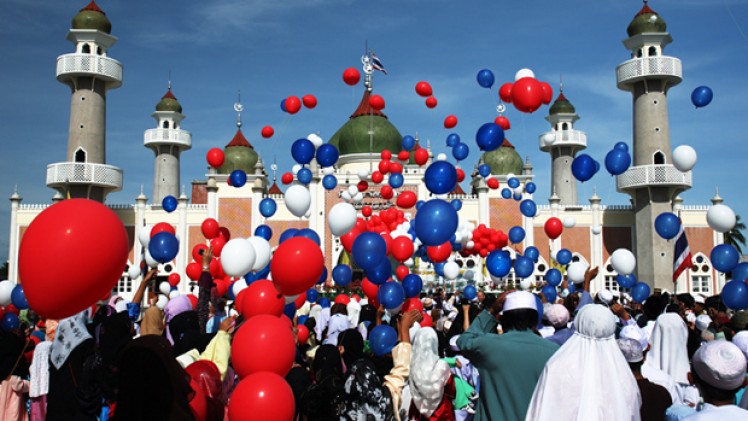 Eid-ul-Fitr follows the Holy month of Ramadan – the ninth month in the Islamic lunar calendar. Throughout the Blessed month of Ramadan, Muslims across the world unite and partake in the act of fasting, which not only involves abstaining from food and drink between the hours of sunrise and sunset but also refraining from any bad deeds or sinful acts – purifying the mind, body and soul in the process. The significance of Eid-ul-Fitr is purely spiritual.

“Holy Prophet came to Madinah, the people had two days in which they used to entertain and amuse themselves. He asked: “What are these two days?” They said: “We used to amuse ourselves and take pleasure in these two days during the Days of Ignorance (jahiliyyah). The Messenger of Allah said, “Allah has substituted for you something better than these two; the Eid of Adha  (sacrifice) and the Eid of Fitr. ” (Sunan Abi Dawood)

On the day of Eid-ul-Fitr Muslims from different countries and places of the world travel to their homelands and hometowns to celebrate the function with their family and friends. Moreover, it is during the festival of Eid that family friends meet with each other thus the members of different families interact with each other. Hence, above everything else, Eid-ul-Fitr holds great social importance as it allows social gathering at least once a year for those who do not interact or meet with each other all year long.

More than one billion Muslims around the world gather to celebrate Eid. The worship process may seem daunting; however, reviewing it on a step by step process can remove some of the stereotypical connotations and provide a more meaningful explanation of the functionalities of ‘Rakat’ (worship).

Action 1: Perform two Rakats behind the Imam for Eid prayer along with six additional Takbirs.

Action 2: After the Imam has said “Allahu Akbar” the first time, you should raise your hands and follow. This is the first Takbir of the prayer.

Action 4: Listen to the recitation of the Holy Quran. The Imam will recite Surah Al Fatiha (the first Surah of the Quran) and then another Surah.

Action 5: When the Imam says “Allahu Akbar” go into Ruku – which is the bowing position.

Action 6: Stand up straight when he says Sami Allahu Liman Hamidah (translation: Allah hears those who praise Him), and say “Rabbana lakal Hamd” (translation: our Lord praise be to You) in a low voice.

Action 7: When the Imam says “Allahu Akbar” go into Sujud – which is prostration. You will do two prostrations just like a normal prayer.

Action 8: The Imam will first recite from the Holy Quran.

Action 9: Afterwards, before going into Ruku, there will be three Takbirs. Follow the Imam. Raise your hands after each “Allahu Akbar.” After the third Takbir, go into Ruku – remember, this is the bowing position.

On the day of Eid-ul-Fitr, Muslims keep all their tensions and conflicts aside and greet each other with love and joy. On this day Muslims forgive each other for all of the previous mistakes and by forgiving all that they hug each other and give their relationship a fresh start that is based on love and brotherhood with no ulterior motives.