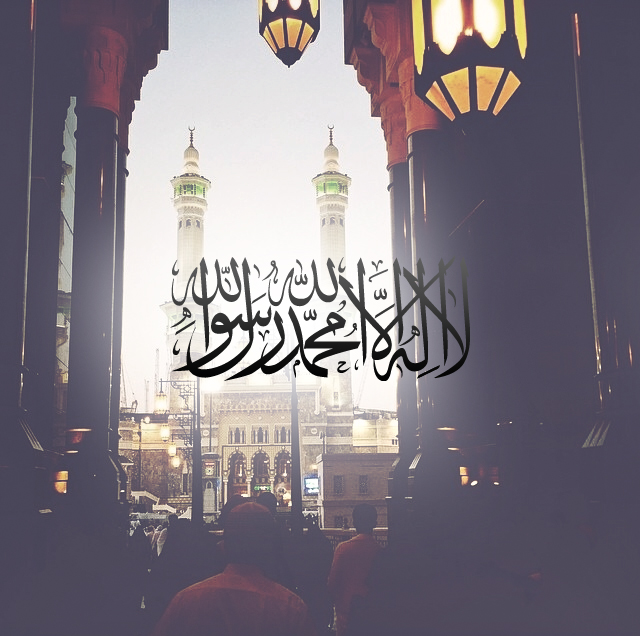 It is the first Kalma Shareef in the Religion of Peace and is the stepping stone to entering the circle of Islam. Believing in One God also includes some of the stipulations in which one has to firmly trust to be able to become called a Mo`min (True Muslim). Every Muslim knows that the key to Paradise is the statement, “There is none worthy of worship except Allah.” The ever continuing complex system of the world and the entire universe represents no disorder whatsoever like the rising of the Sun from the East and setting in the West, interchanging of Day and Night at their specific times and altering of weathers, etc. Allaah says:

There is no error or fault in the entire scheme of things happening around human beings. The one who possesses at least some thinking power must come to know that it is undeniably being controlled by One Allah SWT. It also requires one to think about one`s purpose of existence on planet earth. The Islamic point of view regarding man`s reason of life is described in the following verse of the Holy Quran:

Indeed, our shahadah or testimony of faith must be implemented or realized in our hearts, tongues, and actions. In our hearts, we must have a love for Allaah, fear Allaah and hope in Him. With our tongues, we must testify to the shahadah. And with our actions, we must implement what the testimony of faith requires from us. Allah in Islam is called “Tawheed”. Due to its great importance in the Islamic faith, the entire Makkan (from Makkah) revelations were more or less centred on it, which extended over a long period of 13 years.

We must, in our hearts, be absolutely certain of the truth of the shahadah. Our hearts must not be wavering in any way when we testify to the truth of, “There is none worthy of worship except Allah.” Allah describes the believers in the Qur’an as those who have believed in Allah and then their hearts waver not. Allah says:

There are 7 conditions of “LA ILAAHA ILLA-ALLAH”:

Every action precedes some basic information behind its execution. Without knowing the implication of the task being done, a man cannot achieve the desired result. The same holds true in Shahadah, which requires one to know what it is about. Allah SWT describes the state of true believers in the Holy Quran as:

It means that awareness of the true essence of LA ILAAHA ILLA-ALLAH is the key to venerating Allah SWT in the most rightful spirit, which in turn is the foundation for achieving the blessed place of Jannah in eternal life.

2. Certainty cancelling out a doubt

The understanding of the theme of this testimony needs to be followed with firm belief, which should nullify any kind of suspicions in one`s mind regarding the Ultimate Power of the Almighty. This complete trust in the Most Merciful is the key factor that makes devotees stay firm on their belief and consider Allah SWT as Enough in every matter without any hesitation in mind. The Creator of the Universe says in His Sacred Scripture:

“Only the believers (are) those who believe in Allah and His Messenger, then (do) not doubt but strive with their wealth and their lives in (the) way (of) Allah. Those [they] (are) the truthful.” (Surah Al-Hujurat, 49: 15)

3. Acceptance by tongue and actions

The knowledge and complete belief in Shahadah must be accompanied by its execution in all walks of life of a Muslim. There should also not be any kind of hesitation in front of oppressive rulers who try to stop the believers from worshipping One Allah. This combination of approval of Monotheism of God through tongue and actions should make one accept His entire commandments with great modesty and humbleness.

“……. So do you believe in part of the Scripture and disbelieve in part? Then what is the recompense for those who do that among you except disgrace in worldly life; and on the Day of Resurrection they will be sent back to the severest of punishment. And Allah is not unaware of what you do.” (Quran, 2:85)

The part of the above mentioned Ayah Stresses on accepting the entire teachings of Islam, as there is no choice among them for the believers.

4. Submission to Allah`s Will

One must base each and every deed on this belief by confining them to His Worship alone, e.g. carrying out all the religious actions with a conviction that Allah SWT is the only One Who deserves such praise and adoration.

“And whoever submits his face to Allah while he (is) a good-doer, then indeed, he has grasped the handhold the most trustworthy. And to Allah (is the) end (of) the matters.” (Surah Luqman, 31: 22)

It means that the acceptance of the instructions of Islam should be followed with complete obedience to Allah SWT, which includes the implementation of His whole orders and avoiding what He has forbidden. Allah says:

5. Congruence between belief and actions

Many of the Madani revelations of the Quran were based on explaining the state of hypocrites who by actions always tried to portray themselves as believers, but they did not accept Islam as true religion in their hearts. So, Allah SWT directs Muslims to not become like them in Furqan e Hameed:

“In their hearts (is) a disease so has increased them Allah (in) disease, and for them (is) a punishment painful because they used to [they] lie.” (Surah Al-Baqarah 210)

So, one must have absolute correspondence between its conviction in One Allah and its deeds in order to fulfil the true quintessence of LA ILAAHA ILLA-ALLAH.

The belief of Shahadah should be based on honesty behind doing any religious deed, which should be directly related for the sake of seeking Allah`s Pleasure, and not anyone else`s. the Almighty Lord says in the Holy Quran:

Say, [O Muhammad], “Indeed, I have been commanded to worship Allah, [being] sincere to Him in religion.

In the above stated Quranic verse, the believers have been directed to purify their devotion to God, the Exalted by giving an example of His Messenger ﷺ, Who was the most sincere person and a role model for Muslims in living a rightful life. So, there should be no Riya (Show Off) in any matter concerning Allah`s Worship and Veneration, as it would lead to performing something according to someone else`s will and desire and not for attaining the Sole happiness of Allah SWT.

The testimony of incomparable Worthiness Allah`s worship also calls for keenness in carrying out His entire decrees. This love for the sake of the Almighty must be realized in every matter concerning life. Allah says:

“And among the mankind who takes from besides Allah equals. They love them as (they should) love Allah. And those who believe[d] (are) stronger (in) love for Allah. And if would see those who wronged, when they will see the punishment that the power (belongs) to Allah all and [that] Allah (is) severe (in) [the] punishment.” (Surah Al-Baqarah, 2:165)

Similarly, the Messenger of Allah, peace be upon him, said, “No one meets Allah with the testimony that there is none worthy of worship but Allah and I am the Messenger of Allah, and he has no doubt about that statement, except that he will enter Paradise” [Recorded by Muslim]. Indeed, Allah describes the hypocrites as those people whose hearts are wavering. For example, Allah says:

“Only ask your leave those who (do) not believe in Allah and the Day the Last, and (are in) doubts their hearts, so they in their doubts they waver.” (Surah At-Tawbah 9:45)

It means that the belief in Shahadah should be accompanied with adoring and acting upon the instructions of Allah SWT and His Messenger ﷺ, loving someone else for His sake only and also hating on certain matters of life just because they lead towards immorality.

In short, LA ILAAHA ILLA-ALLAH is not merely a phrase to utter, rather one must centre all its beliefs and actions on the above seven described attributes of this testimony that would fulfil the criteria of Shahadah in the most equitable manner.