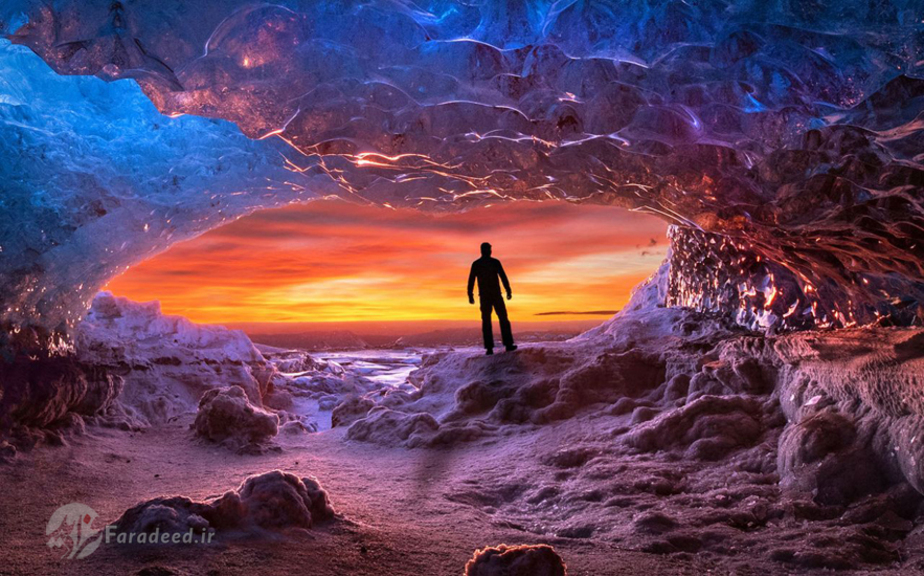 Sigurdur William Brynjarsson stands in the mouth of an ice cave as Icelands Vatnajökull glacier is bathed in an orange glow.Stunning photos from inside the glistening underground spaces show a warm orange glow spreading out across the horizon.

The bright sunlight streaming in bounces off the deep blue of the cave walls, warming its frigid interior. The pictures were taken on January 2 at Iceland’s Vatnajökull glacier, fully reflecting the country’s reputation as the Land of Ice and Fire.

For a real experience in contrast, visit the Ice Cave and Bandera Volcano, “The Land of Fire and Ice,” located along the Continental Divide. Walk through the twisted old-growth Juniper, Fir, and Ponderosa Pine trees; over the ancient lava trails, down into the cave, and into a dormant volcano.

Inside the cave, the natural layers of ice glisten blue-green in the reflected rays of sunlight; illuminating natural arctic algae. Take the walk around the volcano and view one of the best examples of volcanic eruption in the country.