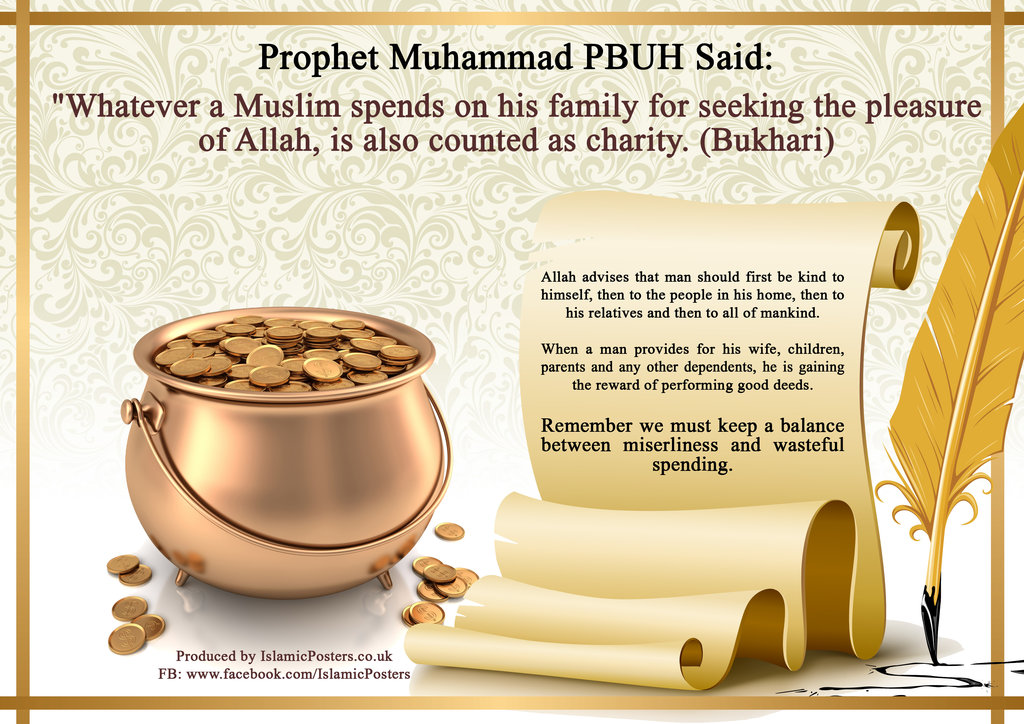 Goodness is an essential part of human nature. A man feels inner satisfaction through committing virtuous deeds, like lending a little money to the poor and helping out a crippled person on the way, etc. Such acts of kindness and compassion are the reasons why mankind still exists on the surface of the earth; otherwise, it would never survive if all of them were cruel and spiteful. The Religion of Islam greatly emphasizes the importance of doing good to others. Allah says:

“If you give alms openly, it is well, and if you hide it and give it to the poor, it is better for you; and this will do away with some of your evil deeds, and Allah is aware of what you do.” (Surah Al-Baqarah 251)

Every action of righteousness in Islam is considered as Sadaqah, which is derived from the Arabic root word, Sadiq (truth). Its literal meaning is to expend from one`s possessions and abilities in the way of the Almighty Lord. Sadaqah is the necessary constituent of a believer`s faith through which it seeks the Pleasure of the Creator of the world by helping out the poor and others in a state of need. Allah says:

The Islamic aid Sadaqah is something that has been given a great deal of importance in Islam because it leads to an ultimate goal that is to help needy and poor people. Islamic aid Sadaqah a charitable giving is to undertake a highly preached, highly emphasized and highly encouraged act in Islam. We as Muslims should give Sadaqah to help poor people.

“The best charity is what you give when you are independent, and you should start with spending on your dependents.” (Sahih Bukhari 5041)

The point here is to understand the difference between Zakah and Sadaqah both of which are mentioned in the previously stated Quranic Verse together. The former is the 3rd pillar of Islam, which binds a Muslim to pay out a fixed or standardized proportion of its supplementary material goods to deprived and disadvantaged people.

Here are some benefits of Sadaqa in Islam:

Sadaqah is the greatest investment for this world and the hereafter. In return, we get good health, blessings and prosperity, and Divine shade on the Day of Judgement, and it also defends us from many kinds of calamities. There is a Sadaqah for everything, and it is the spiritual duty of every Muslim to commence this task in every possible way. In its simplest form, even passing a friendly smile to someone is considered to be a Sadaqah. Islam greatly emphasizes the importance of doing good to others. Allah says:

“Who (is) the one who will lend (to) Allah – a loan good, so (that) He multiplies it for him – manifolds many And Allah withholds and grants abundance, and to Him, you will be returned.” (Surah Al-Baqarah, 2: 245)

Sadaqah charitable giving is something that Allah (SWT) and the last Prophet Muhammad (PBUH) talked about in great detail. The reward for spending in the way of the Almighty Lord is so immense that it has been compared to a bowing a seed, which ultimately results in getting hundreds of grains after some time. It means that one gets the unimaginable number of rewards and blessings from the Creator of the universe for one act of Sadaqah. Allah says:

Only the charities (are) for the poor, and the needy and those who collect them, and the ones inclined their hearts, and in the (freeing of) the necks, and for those in debt and in (the) way (of) Allah, and the wayfarer – an obligation from Allah. And Allah (is) All-Knowing, All-Wise.” (Surah At-Taubah 9:60)

The act of Sadaqah is not restricted to Zakah only, for that is only a part of it. Sadaqah is actually an ongoing process that includes every act of goodness and uprightness, which ultimately results in attaining the Pleasure of Allah SWT and earning great rewards and blessings from Him. Allah says:

According to Prophet Muhammad (SAW) traditions, we are discussing some types of Sadaqah which are as follows:

In fact, sadaqah has been mentioned by Muslims as a way to thank Allah and guard themselves against any kind of difficulties. In addition, it helps society by providing support to the needy and the poor. Sadaqah is a way for those whom Allah has blessed with wealth to share with their relatives and neighbours in need.

“When a Muslim spends on his family intending good it is regarded as a charity for him.” (Sahih Bukhari 5036)

Many of us hesitate to give using the excuse that we don’t have enough to give. We should give the best of our possessions in the Path of Allah. We should avoid giving something to others which we ourselves dislike. Therefore our choice of wealth will define the passion of our love towards Allah.

Sadaqah and charity is not something that we should give only once in a while. Rather, we should try to find a way to give daily to the needy, even if it’s little. If only we knew the blessings and rewards from such acts and how Allah saves us from life’s daily problems, we would give daily. Allah says:

Our duty is just to give sadaqah generously and leave the rest on Allah. He better knows what is good for us. We recognize that all blessings come from Allah, and we should open our hearts and share them with others.

“Protect yourself from the Hellfire even with half of a date in charity, and if he cannot find it then with a kind word.“ (Sahih Bukhari 6195)

In Islam, giving Zakat and Sadaqah (charity) has enormous rewards. The Quran verses and the Prophet’s (Sallallahu Alayhi Wa Sallam) ahadith attest to the fact that giving charity not only is an act of kindness toward the recipients but it has enormous benefits for those who give it including warding off life’s challenges and problems and resulting in the increase of one’s wealth. The following sheds some light on such rewards.

Sadaqah is actually an ongoing process that includes every act of goodness and uprightness, which ultimately results in attaining the Pleasure of Allah SWT and earning great rewards and blessings from Him. Allah says:

Sadaqah is the greatest investment for this world and the hereafter. In return, we get good health, blessings and prosperity, and Divine shade on the Day of Judgement, and it also defends us from many kinds of calamities. Let’s invest in our akhirah today; join one of the many Islamic charities, such as Islamic Help, and give to someone in need today.