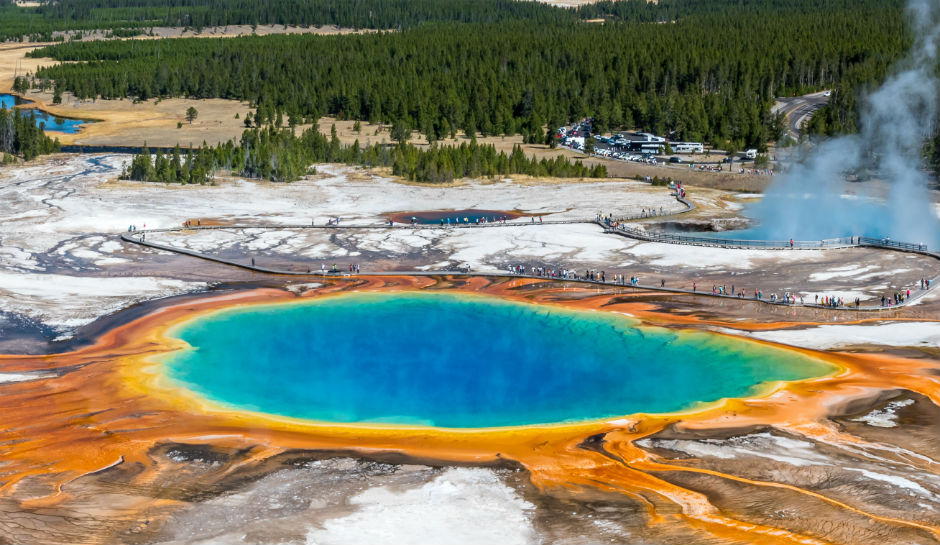 The geothermal areas of Yellowstone include several geyser basins in Yellowstone National Park as well as other geothermal features such as hot springs, mud pots, and fumaroles. The number of thermal features in Yellowstone is estimated at 10,000.Researchers at Washington State University and the Scottish Universities Environmental Research Centre say the biggest Yellowstone eruption, which created the 2 million year old Huckleberry Ridge deposit, was actually two different eruptions at least 6,000 years apart.

Their results paint a new picture of a more active volcano than previously thought and can help recalibrate the likelihood of another big eruption in the future. Before the researchers split the one eruption into two, it was the fourth largest known to science.

“The Yellowstone volcano’s previous behavior is the best guide of what it will do in the future,” says Ben Ellis, co-author and post-doctoral researcher at Washington State University’s School of the Environment. “This research suggests explosive volcanism from Yellowstone is more frequent than previously thought.”

That first eruption still deserves to be called “super,” as it is one of the largest known to have occurred on Earth and darkened the skies with ash from southern California to the Mississippi River. By comparison, the 1980 eruption of Mount St. Helens produced 1 cubic kilometer of ash. The larger blast of Oregon’s Mount Mazama 6,850 years ago produced 116 cubic kilometers of ash.

Convection of the churning brine and conduction from surrounding rock transfers heat to an overlaying layer of fresh groundwater. Movement of the two liquids is facilitated by the highly fractured and porous nature of the rocks under the Yellowstone Plateau. Some silica is dissolved from the fractured rhyolite into the hot water as it travels through the fractured rock.

Part of this hard mineral is later redeposited on the walls of the cracks and fissures to make a nearly pressure-tight system. Silica precipitates at the surface to form either geyserite or sinter, creating the massive geyser cones, the scalloped edges of hot springs, and the seemingly barren landscape of geyser basins.