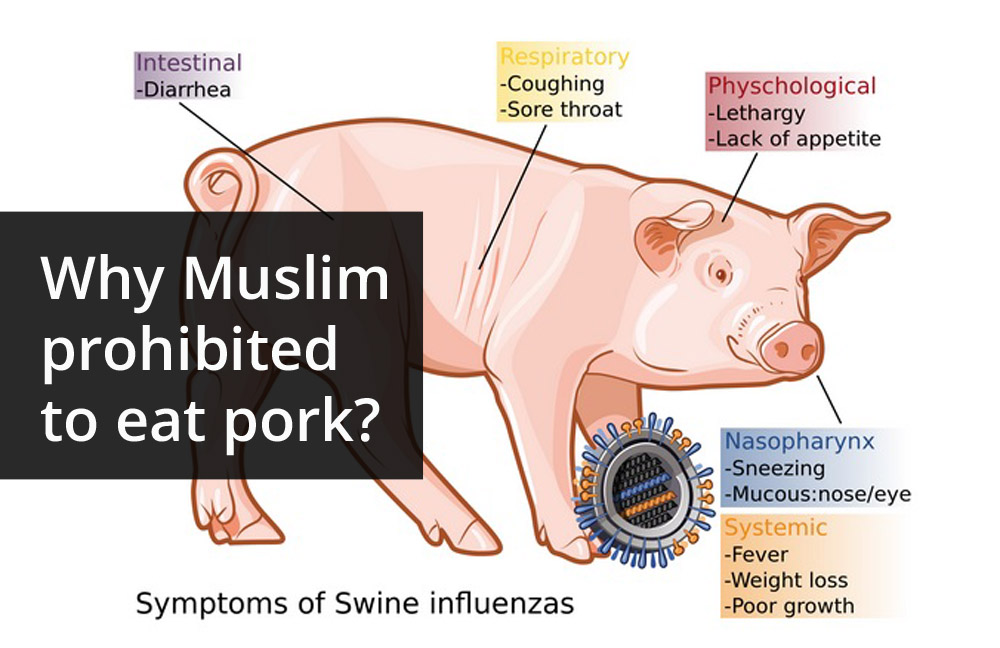 The fact that the consumption of pork is prohibited in Islam is well known. For Muslims, it’s not just about a healthy soul but also a healthy body. We have all heard the phrase ‘You are what you eat.’ The simple idea is if you eat good, pure food you will stay fit and healthy. On the other hand, if you eat foods carrying toxins you may have unwanted health problems.

Consumption of pork is linked to numerous health problems. For the world’s 2 billion Muslims, the restriction of pork is not a lifestyle choice but rather a divine command. Obeying that command is an act of worship. Allah says:

“He has only forbidden you dead meat, and blood, and the flesh of swine, and any (food) over which the name of other than Allah has been invoked. But if one is forced by necessity, without wilful disobedience, nor transgressing due limits,- then Allah is Oft-Forgiving, Most Merciful.” (Surah An-Nahl, 115)

Description: God allows us to enjoy all the good lawful things and forbids us to partake of those things that are harmful to our beliefs, health, well being, or morals. Islam is a holistic way of life, taking into account physical, spiritual, and emotional well-being, each a separate but overlapping part of the structure of a human being. Allah says:

But He did not abandon us to a world of instability and insecurity. He gave us a book of guidance, the Quran, and the example of Prophets and Messengers to explain that trusting in God was the way for us to achieve success in this life and the hereafter. A Muslim spends his or her life endeavouring to please God by worshipping Him and obeying His laws, or rules. One of those rules is that eating pork, or pork products are forbidden. Allah says:

“Only is (the) statement (of) the believers when they are called to Allah and His Messenger to judge between them (is) that they say, “We hear and we obey.” And those [they] (are) the successful.” (Surah An-Nur 24:51)

Islam is a holistic way of life, taking into account physical, spiritual, and emotional well-being, each a separate but overlapping part of the structure of a human being. The other non-Muslims and atheists (disbelievers of God) will agree only if convinced through reason, logic, and science. Eating pork can cause no less than SEVENTY different types of diseases. Allah says:

“Only He has forbidden to you the dead animals, and [the] blood, and flesh, (of) swine, and what has been dedicated [with it] to other than Allah. So whoever (is) forced by necessity without (being) disobedient and not transgressor, then no sin on him. Indeed, Allah (is) Oft-Forgiving, Most Merciful.” (Surah Al-Baqarah 2:173)

A person can have various helminthes like roundworm, pinworm, hookworm, etc… One of the most dangerous is “Taenia Solium”, which is in layman’s terminology called tapeworm. It harbours in the intestine and is very long. Its ova i.e. eggs, enter the bloodstream and can reach almost all the organs of the body.

Ever wondered why the meat of pigs, pork, has been prohibited in Islam? Why Muslims cannot eat pigs? Why pig has been labelled as the filthiest animal? Let us back this claim with scientific reasons.

Problems with Pork and Why You Should Avoid Pork:

Increased Cancer Risk from Bacon and Other Processed Pork:

Avoiding pork for these groups is based on Leviticus 11, Deuteronomy 14, Isaiah 65 and Isaiah 66.

Allah Almighty says about Pork prohibited in the Holy Quran:

Pork prohibited in the Bible

“I do not find within that which was revealed to me [anything] forbidden to one who would eat it unless it is a dead animal or blood spilt out or the flesh of swine – for indeed, it is impure – or it is [that slaughtered in] disobedience, dedicated to other than Allah.” (Surah Al-‘Anam 6:145).

The Christian is likely to be convinced by these religious scriptures. The Bible prohibits the consumption of pork, in the book of Leviticus “And the swine, though he divides the hoof, and be cloven-footed, yet he cheweth not the cud; he is unclean to you”.

“Of their flesh shall ye not eat, and their carcass shall ye not touch, they are unclean to you.”[Leviticus 11:7-8]

Pork is also prohibited in the Bible in the book of Deuteronomy “And the swine, because it divideth the hoof, yet cheweth not the cud, it is unclean unto you. Ye shall not eat of their flesh, nor touch their dead carcass.”[Deuteronomy 14:8]

A similar prohibition is repeated in the Bible in the book of Isaiah chapter 65 verse 2-5.

Other dangerous helminths are Trichura Tichurasis. A common misconception about pork is that if it is cooked well, these ova die. In a research project undertaken in America, it was found that out of twenty-four people suffering from Trichura Tichurasis, twenty-two had cooked the pork very well. This indicates that the ova present in the pork do not die under normal cooking temperatures.

A believer understands that God is the Wisest and the Most Just; therefore, His rules are designed to benefit us in our daily needs, be they physical, emotional, or spiritual.  The Creator knows the best way for His creation to live in this world and prepare for the next.  It is not permissible for a Muslim to consume pork under any circumstances except in cases of dire necessity, such as, if a person’s life depends on eating it.  In cases of dire necessity, prohibited things are permitted.

God allows us to enjoy all the good lawful things and forbids us to partake of those things that may be harmful to our beliefs, health, well being, or morals.  Consequently, Muslims are acutely aware of the dangers of eating things that are forbidden and therefore make concerted efforts to seek out permissible food, even if it involves extra effort or expense.

DISEASES CAUSED BY PORK IN DETAIL

The following lists show germs or parasites that are found in pork and some diseases caused by them. Many of these diseases are contagious while some are proven fatal. This proves that the more science advances the more Islam is shown correctly as a religion of God.

The main reason pork is forbidden for Muslims is because it says in the Holy Quran that some food is allowed, while others are explicitly declared haram, which means forbidden. And pork is one of those forbidden foods. However, there is an exception that is written in the Holy Quran as well where it states that you can eat it if you are starving and there is nothing else to eat but pork. This is also by the Jewish faith, according to their laws and traditions of eating kosher meat.

Pork contains more fats than other meats. Therefore, people who love pork are fatter than others. Cholesterol is higher in their blood thus making them flatter to atherosclerosis cardiovascular accidents and sudden death.

PIG IS THE MOST SHAMELESS ANIMAL

The pig is the most shameless animal on the face of the earth. It is the only animal that invites its friends to have sex with its mate. In America, most people consume pork. Many times after dance parties, they have swapping of wives; i.e. many say “you sleep with my wife and I will sleep with your wife.” If you eat pigs then you behave like pigs.

We look upon America to be very advanced and sophisticated. Whatever they do, we follow after a few years. According to an article in Island magazine, this practice of swapping wives has become common practice in South Asia.

THE PIG IS ONE OF THE FILTHIEST ANIMALS ON EARTH

The pig is one of the filthiest animals on earth. It lives and thrives on muck, faeces, and dirt. It is the best scavenger that I know that God has produced. In the villages, they don’t have modern toilets and the villagers defecate in the open air (Body releases) Very often these releases are cleared by pigs.

Some may argue that in advanced countries like Australia, pigs are bred in very clean and hygienic conditions. Even in these hygienic conditions, the pigs are kept together in sties. No matter how hard you try to keep them clean they are filthy by nature. They eat and enjoy their own as well as their neighbour’s excreta.

Pork is not dirty but rather regarded as impure, unhealthy and harmful for humans due to the fats, toxins, and bacteria it contains and the way the pig spends its life rolling around in the mud and its excrement. The specific aspect that pork is unhealthy has even been proven by scientists, such as Hans-Heinrich Reckeweg, who argued that western populations who eat pork carry more diseases than other populations who do not eat pork.

Processed pork can also be found in many other foods in the form of gelatin. And treatments such as radiation, which supposedly kills bacteria, might seem to make pork “cleaner” but the fact remains that the meat still comes from an animal Muslims are forbidden to eat.

Muslims living in western societies often face a challenge with this issue because they have a harder time finding halal meat and determining if animals have been slaughtered in an Islamic way, or if the food they buy contains any processed pork. The Creator knows the best way for His creation to live in this world and prepare for the next.

God allows us to enjoy all the good lawful things and forbids us to partake of those things that may be harmful to our beliefs, health, well being, or morals. Consequently, Muslims are acutely aware of the dangers of eating things that are forbidden and therefore make concerted efforts to seek out permissible food, even if it involves extra effort or expense.

We live in a Muslim country that holds on to its religious laws but at the same time wants to offer a variety of international products and foods to attract our culturally diverse population. Therefore, while it’s not easy to find pork, most hotels serve it. So, if you decide to eat pork, that is up to you.