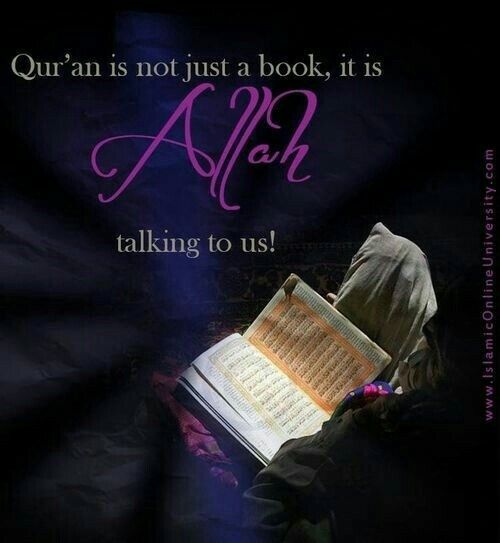 The Holy Quran is a book of guidance and a sea of knowledge for those who take inspiration from it. While the Quran is meant to be a guide for all of humanity, regardless of creed, identity, cultural background, age, or gender, we have more potential to learn from its guidance and knowledge if we purify our hearts. The Book of Allah is unlike any other; it is the timeless Speech of Allah and not a created thing. It is the study guide for life, death, and what follows. Allah says:

Indeed it was revealed from Allah our creator, from whom only great things are sent down to His creation.  The Quran-a magnificent book is undoubtedly perfect in all aspects. The Holy Quran does not just comprise of teachings about the past nations but also encloses life-transforming instructions and guidelines from the Gracious Lord. Allah says:

“Hold firmly to the rope of Allah all together and do not become divided. Remember the favour of Allah upon you, when you were enemies and He brought your hearts together and you became brothers by his favour.” (Surah Ali Imran 3:103)

The Quran is complete truth, void of any form of falsity and made clear for all those who crave guidance… It’s a straightforward book that is easy to understand. Surely you will not hesitate to seek a teacher or a study circle for the Quran once you hear the last and perhaps greatest benefits of reading and contemplating over the Quran. Each benefit acts as enough encouragement to Muslims that they should recite the Quran daily with understanding. Allah says

“The believers are but brothers, so make reconciliation between your brothers and fear Allah that you may receive mercy.” (Surah al-Hujurat 49:10)

An important feature of the Quran, as the Dunya (world), is a temporary place of living full of trials and hurdles. Often the man is in darkness, blind-sighted by the trials and love for the transitory life that confounds him. When a Muslim recites Quran, it affects the heart and purifies it by cleaning it from all the impurities that stick on it.

Rewards, Benefits, and Virtues of the Quran and its Recitation:

“This is the book about which there is no doubt, guidance for those conscious of Allah.” (Surah Al-Baqrah 2:2)

It is a book full of miracles that no single human being can fully grasp. One of the miracles of the Quran is that it throws a challenge that if the entire creation of humans and jinn pulled forces together, they can’t come up with something close to the shortest of all chapters of the Quran. No one person or group has been able to refute this challenge in the last 1400 years! Allah says,

It is a book of cure and mercy for the heart, soul, and body of man (specifically the believers), from the Most Gracious and Most Merciful. The purpose of the Quran is to bring blessings to a person and it brings about the spirit of monitoring in the readers. Therefore, if one does not read the Quran on a daily basis, he or she is actually missing a chance of getting inspiration to examine all the things Allah has created and all the matters of life. Allah says,

“Aliff, Laam, Ra. [this is] a book which we have revealed to you, [o Muhammad], that you might bring mankind out of darkness into the light by permission of their lord- to the path of the exalted in might, the praiseworthy.” (Surah Ibrahim 14:1)

It serves as a reminder to all those who fear Allah and take due notice from His admonitions. It is a criterion to emphasize and differentiate between the truth and falsehood and good and evil. Quran is a Divine Book that leads towards righteousness and morality.  Allah says,

“Remember your Lord in yourselves with humility and in private without announcing it in the mornings and evenings, and do not be among the heedless.” (Surah Al-A’raf 7:205)

The Quran is the final and definitive message of Allah to his creations. Muslim to reflect and contemplate upon every verse in the Quran and to adhere to it in all matters of life. It is the book of answers-answers that man seeks in this bundle of complications called life. Things might not be complicated after all if we embrace the Quran with all the sincerity due to it. This will just do us good!

The Quran is a book full of knowledge and wisdom.  Those who recite it will attest to this. It has touched on everything that one may think of. Muslims will earn great rewards for reciting the Quran and implementing it in their daily life routine. Quran recitation can be made attractive and in doing so it can initiate a sort of conversation with Allah Almighty. Allah says:

“A Book (the Quran) which We have sent down to you, full of blessings that they may ponder over its Verses, and that men of understanding may receive admonition.” (Quran, 38:29)

Reciting the Holy Quran brings infinite numbers of benefits in this life and in the hereafter life.  It is the way to paradise, the way of building sound psychological characters. This purpose of Quran revelation is mentioned in the Quran in the following way: Allah says:

Besides the Qur’an being the word of Allah, it also serves as a healing and protection for mankind. Daily recitation of the Quran brings reward from Allah; it can also bring other benefits in the form of the cleansing of the heart, a chance of communication with Allah and thus becoming a better Muslim every day. The Holy Quran is a highly admired Book of Allah (SWT) that requires proper understanding.