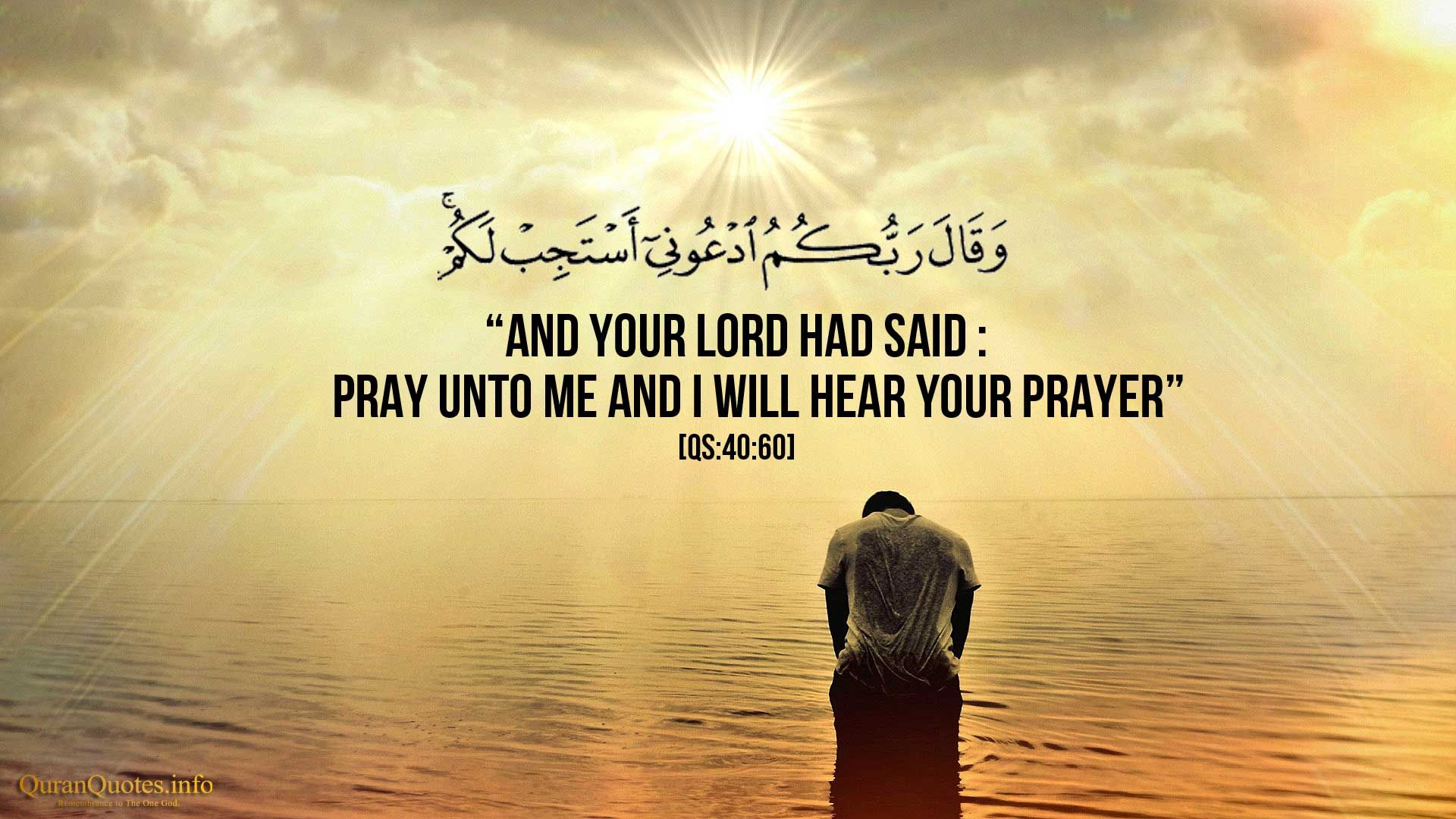 Through prayer, you can connect with your Lord. The Arabic word for prayer (As-Salah) is derived from the Arabic word meaning “connection.” The Messenger of Allah (peace be upon him) said: “When anyone of you stands to pray, he is communicating with his Lord, so let him pay attention to how he speaks to Him.” Don’t cut this relationship between you and your Creator. Allah says:

“Recite what is sent of the Book by inspiration to thee, and establish Regular Prayer: for Prayer restrains from shameful and unjust deeds; and remembrance of Allah is the greatest (thing in life) without a doubt. And Allah knows the (deeds) that ye do.” (Surah Al-Ankabut 45)

Prayer wipes out sins. Salat in Islam is an obligatory Muslim prayer and is part of the pillars of Islam. It is one of those times that creates a direct connection with God. We must do it as Muslims. We should do the five daily prayers and if we want to add the rewards from Allah Subhanahu Wa Ta’ala, we can do sunnah prayers (types of Sunnah prayer), too. Allah says:

“… You can only warn those who fear their Lord unseen and have established prayer. And whoever purifies himself only purifies himself for [the benefit of] his soul. And to Allah is the [final] destination.” (Surah Fatir 35:18)

Salah is the major form of worship that a Muslim offers five times a day regularly. It is an obligation upon a Muslim and a Muslim is to offer no excuse when it comes to offering Salah. The offering of Salah in addition to representing the submission of Muslims to their Lord also has other benefits as well which are highly cherished by every Muslim. Allah says:

“Men – not distracts their trade and not sale from (the) remembrance of Allah and (from) establishing the prayer and giving zakah. They fear a Day will turn about therein the hearts and the eyes.” (Surah An-Nur, 24:37)

When we are doing prayer, we should not speak anything, except saying prayer’s reading and dhikr. Someone who laughs when he is doing prayer, his prayer will be void. Its means that laugh with a big sound. If he only smiles, it has not spoiled his prayer.

What to do when you Miss Salah

If you miss a prayer you have to make it up as soon as you wake up or remember. Prayers must be made up in chronological order. For example, if you missed Asr prayer, and it is now Maghrib time, then you must pray Asr first, then Maghrib.

Primary things that invalidate prayer are as follows:

A-Pillar of Islam: Prayer is the second most important pillar of Islam and is the most regular compulsory action in a Muslim’s life. We fast just one month a year; we must give Zakah once a year, and Hajj is only once a lifetime. However, prayer is the one act that must be fulfilled at least five times a day, regardless of the circumstance. Allah did not even exempt the Muslims from praying during the battle! Allah says:

“Those who [they] during their prayers (are) humbly submissive.” (Surah Al-Mu`minun 23:2)

Success lies in the Prayer: The Prophet (peace be upon him) said: “The first of his deeds for which a man will be called to account on the Day of Resurrection will be the prayers. If it is found to be perfect, he will be safe and successful. But if it is defective, he will be unfortunate and a loser.” Allah says:

Shields against evil: A man was created weak and without seeking help from Allah, it will be impossible to refrain from evil. Allah says: “Verily, prayer restrains (oneself) from shameful and unjust deeds…” (Qur’an 29:45)

Enriches the soul: Man is forgetful, especially with our busy lifestyles. Prayer satisfies our spiritual need to be in contact with our Creator. This gives the soul peace and contentment. Allah says, “Without a doubt, in the remembrance of Allah do hearts find satisfaction.” (Qur’an 13:28)

Makes us humble: By realizing Allah’s greatness and dependence on our Lord, man is humbled and rids us from pride and arrogance. In the prayer, the Muslim puts the highest part of his body and source of intellect, his head, onto the ground and says, “How perfect is my Lord, the Highest.”Humbleness is one of the qualities which Allah has associated with success. Allah says: “Successful indeed are the believers, who are humble in their prayers.” (Qur’an 23:1-2)

Of course, this can only be achieved when one understands what one is reciting and concentrates with humility.

“O you who have believed, seek help through patience and prayer. Indeed, Allah is with the patient.” (Qur’an 2:153)

Major benefits of Prayer that elaborate on the importance of Prayer:

Prayer in Islam has great importance, this can be proven by the following:

19. Namaz has multiple many health and fitness benefits. Some of the important physical health benefits are as follow:

If you are doing prayer and you suddenly change your intention to do not pray in your heart, then at that time your prayer has been void. Because his intention has spoiled, although he has not done things that can spoil prayer. If someone does not do one of the prayer’s pillars intentionally, then his prayer will be void. But if he only forgets to do it, then he should do sujud saw. If he forgets sujud saw, then he can do it after Salaam.

“My Lord! Make me an establisher (of) the prayer, and from my offsprings. Our Lord! and accept my prayer.” (Surah Ibrahim 14:40)

Prayer is the second most important pillar of Islam and is the most regular compulsory action in a Muslim’s life. We fast just one month a year; we must give Zakah once a year, and Hajj is only once a lifetime. However, prayer is the one act that must be fulfilled at least five times a day, regardless of the circumstance. Allah did not even exempt the Muslims from praying during the battle!

In a nutshell, those who learn and read the Quran regularly are familiar with the importance of Salah and how strongly has Allah Almighty emphasized it and explained its importance to the people in the Quran. A Muslim must realize that above anything, Salah is an obligation and every Muslim has to fulfil his or her obligation.