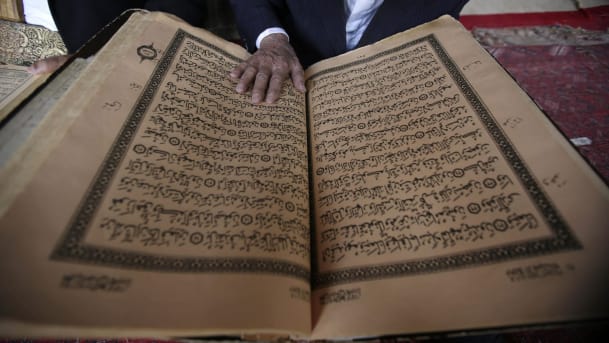 The social system in Islam is based on creating a strong bond and learning how to live together as good Muslims. Islam requires all its followers to be faithful and helpful and to share each other’s sorrows and happiness. It enjoins them to establish a strong relationship in which one can depend upon the other for help. A true Islam society is to keep loyalty and faith among themselves. Allah says:

Islam says that if there is any real difference between man and man it cannot be one of race, colour, country or language, but of ideas, beliefs and principles. Two children of the same mother, though they may be equal from common ancestry, will have to go their different ways in life if their beliefs and moral conduct differ. Allah says:

Islam places great emphasis on the marital bond, it only wants it to remain intact as long as it is founded on the sweetness of love or there exists at least the possibility of lasting companionship. According to Islam the correct relationship between man and woman is marriage, a relationship in which social responsibilities are fully accepted and which results in the emergence of a family.

The importance and benefits of Islam:

The religion Islam made the social preference in man based on his worship to Allah and follow His Good Pleasure and Generous Recompense, through the channel of providing other fellow humans with service and help and not the fulfilment of his individual needs and interests. Living the faith is worship one can do service for Allah Almighty through service to humankind. Islam requires all its followers to be faithful and helpful and to share each other’s sorrows and happiness.

The social system of Islam enjoins the people to establish a strong relationship in which one can depend upon the other for help. A true Islamic society is where people can keep loyalty and faith among themselves. In an Islamic society, one has to respect the rights of others and conduct good duties towards each other. Mutual respect, kindness, and Justice towards each other create a close relationship and good morals in Islamic society. The foremost and fundamental institution of human society is the family unit.

The people of Islamic society should co-operate in acts of goodness and righteousness but not in acts of sin and injustice. Keeping good morals is another significant principle of the social system in Islam. Honesty, faithfulness, respecting neighbours, love, mercy, sacrifice, sympathy, keeping ties with near kin, and being kind and humble to others, are some other factors that consolidate society and make happy its members. Allah says:

“Establish prayer, for most certainly prayer prevents from shameful deeds, indecency, all forms of evil, corruption, exploitation; and the constant awareness of Allah is the greatest of virtues.” (Surah Al-`Ankabut 29:45)

Being Muslim it is our duty and responsibility to form an Islamic society and keep it safe from corrupt elements using enjoining good and forbidding evil. Allah says:

Islam is the religion that promotes peace, love, and respect among Muslims and also with the people of other religions. The society in which Muslims live is known as an Islamic society. Islamic society is the one whose members have “Iman” (faith) in Islam, apply its laws in their life and perform religious duties and abstain from doing what is unlawful according to Islam. The foundations of the social system of Islam depends on the belief that we are all equal and constitute one single society based on Islamic teachings. Allah says:

Allah Almighty created a human couple to herald the beginning of the life of mankind on earth, and everybody living in the world today originates from this couple. Islam makes clear to all men that they have come from the same parents and are therefore brothers and equal as human beings. Islam says that if there is any real difference between man and man it cannot be one of race, colour, country or language, but of ideas, beliefs and principles.