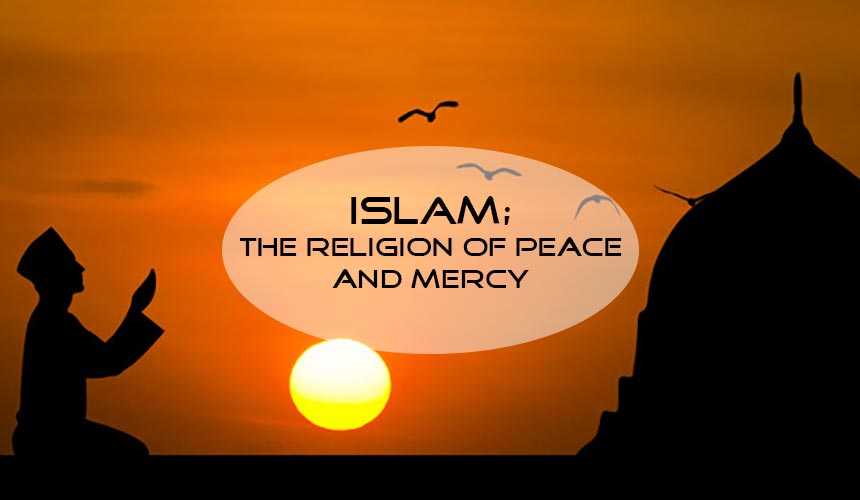 The Quran refers to Islam as the religion of Abraham, Jacob, Moses, Jesus, and other prophets. It is simply the last of the divine messages to reach humankind through Prophet Muhammad, who was chosen by the Creator as the bearer of his last and all-encompassing revelation. Islam is a universal faith for all times, all places, and all peoples. It is predicated on the belief that there is but one God, Allah, the Creator of the universe and of humankind. The relationship which exists between God and His creation is based on one religion. These fundamental unities are the foundation of faith. Allah says:

“Do not call upon another god alongside Allah. There is no God but him. Everything will perish but his countenance. Judgment belongs to him, and to him you will return.” (Surah al-Qasas 28:88)

Religion in this context is a set of rules that regulate the relationship between the Creator and the created. Islam teaches that God is the source of peace. At the core of Islam is the focus of an individual’s personal relationship with God, their Creator. It encourages a believer to have sustained awareness of God which is a key to lasting happiness. One in five people on this planet are Muslims, so it seems reasonable to try to learn much more about them. Allah says:

“Unto Allah belong the best names, so call upon him by them and leave those who violate the sanctity of his names.” (Surah al-Araf 7:180)

Religion sets forth the framework for permissible economic, social and political systems and formulates the principles and rules through which people should deal with one another. Islam is a religion in which faith is based on clear proof. It encourages people to use their God-given intelligence to think and ponder over their life and the universe. Although this life is a test, God has provided sufficient signs and guidance to people who are open-minded and sincere to be able to acknowledge the truth.

Here are some key findings of the Religion of Islam:

“The religion of Islam is built on five (pillars) testifying that there is no god but Allah and that Muhammad is the Messenger of Allah, performing the prayers, paying the zakat, making the pilgrimage to the House, and fasting in Ramadan.”

The Beauty and Benefits of Islam:

Islam is very much a law-oriented religion. It provides the guidelines and principles upon which laws and regulations can be established. The influence of Islam must not be viewed in a narrowly legalistic light but rather as providing a framework that guarantees basic fairness and justice to all. The Quran enjoins that Muslims do good and abjure evil. Allah says:

“Worship Allah and associate nothing with him, and be good to parents and relatives.” (Surah al-Nisa 4:36)

Unlike other religions, Islam is not named after its founder or the community of its birth. Islam is an attributive title that signifies obedience to God, the Creator of the Universe. One of its main beauties is that it acknowledges the complete perfection, greatness and uniqueness of God with absolutely no compromises. This is reflected in Islam’s pure teachings of the attributes of God.

God is One and Unique:

God is the All-Powerful:

God is the Highest:

Unlike other religions, there are many clear proofs, signs and miracles that the book of Islam, The Quran is from God.

Islam teaches that God is the Most Merciful and will forgive and pardon those who sincerely want to repent. The beautiful steps for repentance include being sincere, remorseful, refraining from committing the sin as well as having the intention not to repeat it. Islam encourages a continuous process of self-development and self-purification.  Allah says;

“Say: I am only a man like you to whom it has been revealed that your god is one God, so take a straight path to him and seek his forgiveness.” (Surah Fussilat 41:6)

God created humans with intellect and free will to test them as to who will wilfully choose to follow His guidance. This life is an ultimate testing ground and although we cannot control everything that happens to us, we can control how we react. Islam encourages a person to focus on what is in their control, to be grateful to God for blessings, and to be patient during hardships. Patience or gratitude – this is the formula for a happy life.