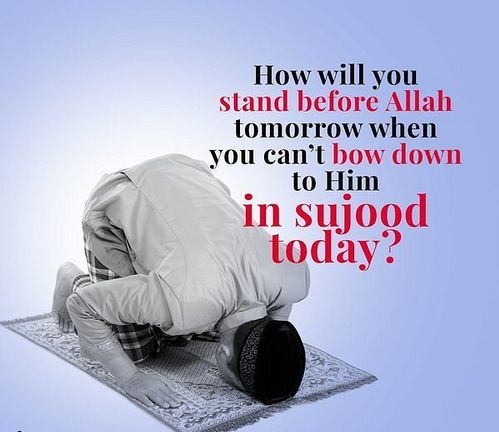 Prayer is the second of the Five Pillars of Islam. It is the belief that Muslims should pray five times each day. Prayer is important as it allows Muslims to communicate with Allah, listen to Allah and follow in the footsteps of the prophets. Prayer is performed five times each day. Prayer purification of the heart is the ultimate religious objective of prayer. Our prayers should cleanse the heart of every spiritual disease such as envy, malice, and arrogance. Allah says:

Prayer is one of the central elements of Islamic practice and worship. The importance of prayers lies in the fact that no matter what actions one performs in his life, the most important aspect is one’s relationship to Allah, that is, one’s faith (Imaan), God-consciousness (taqwa), sincerity (ikhlas) and worship of Allah (ibaadah). This relationship with Allah is both demonstrated and put into practice, as well as improved and increased, by the prayer. Allah says:

“Recite what has been revealed to you of the Book and establish prayer. Verily, prayer prohibits one from obscenity and evil, but the remembrance of Allah is greater, for Allah knows what you do.” (Surah Al-‘Ankabut 29:45)

Prayer plays a fundamental role in the Islamic faith and in this guide, we will explore the most important facets of the second pillar of Islam, including the meaning of salah, when you should be performing salah and what benefits salah can provide. Its aim is to generate within the subliminal self of man such spiritual power, the light of faith and awareness of God as can enable him to strive successfully against all kinds of evils and temptations and remain steadfast at times of trial.

Following are some of the benefits that praying brings us:

The Physical benefits of Islamic prayer on the human body are discussed in this article. The act of prayer requires the worshiper to move through several distinct bodily postures while reciting a specific supplication. Prayer involves a certain level of physical activity which includes standing, bowing prostration and sitting consecutively. Each position involves the movement of different parts of the human body in ways that Some muscles contract isometrically and some contract in approximation or isotonically. Allah says:

Those who, if We give them power in the land, establish worship and pay the poor-due and enjoin good and forbid evil. (Surah Al-Hajj 22:41)

Prayer is an obligation upon a Muslim and a Muslim is to offer no excuse when it comes to offering prayer. Every deed, whether good or bad that a Muslim undertakes in this life, he or she will have to be answerable for it in the afterlife. Thus, to prevent one’s self from all the lewdness that is common in the world of today, a Muslim must find refuge in Salah as it will help in combating lewdness. Allah says:

“So Allah rewarded them for what they said (with) Gardens flows from underneath them the rivers, will abide forever in it. And that (is the) reward (of) the good-doers.” (Surah Al-Ma`idah 5:85)

Prayer also represents a concrete manifestation of the Islamic conception of free will, in that the decision to pray is one that must be made by each individual. In this way, prayer is a uniquely “human” form of worship, for all other creatures submit without question to Allah’s Will and are engaged in His praise, glorification, and remembrance.

Here is some Importance of Prayer in The Holy Quran  Verses:

Prayer’s purpose is to put ourselves in touch with God; to strengthen our relationship with Him; to be grateful for all His blessings, and to remind ourselves of His Greatness. When a Muslim prays, the intention behind the prayer must be right, otherwise, Allah will know and the prayer will be meaningless. Allah says:

“Establish prayer at the two ends of the day and in the first hours of the night. Verily, good deeds remove evil deeds.” (Surah Hud 11:114)

Prayer is the last will of Prophet Muhammad given to all Muslims, our Prophet told us to keep our prayers until we are dead. Prayer reminds us that all things come from Allah and it is to Allah that all will return. For Muslims, praying is not a regulation. It is a gift. The benefits of prayer do not end with the spiritual domain but in fact, encompass the physical domain as well.

Rules, Guidelines and Facts About Prayer

There are five separate daily prayers that must be performed; they are as follows:

Allah doesn’t need your prayer. Allah doesn’t need anything from anyone-Glory be to Him. It is you that stands in need of His mercy. When the prayer is performed in the congregation, it cultivates brotherhood, equality and humility between Muslims. Allah says:

“Then called him the Angels when he (was) standing – praying in the prayer chamber. “Indeed, Allah gives you glad tidings of Yahya, confirming [of] a Word from Allah and a noble and chaste and a Prophet among the righteous.” (Surah Al-Imran, 3:39)

The principle of prayer is to ensure Muslims maintain their faith and devotion to Allah SWT, to increase taqwa (closeness to Allah SWT) and to remain conscious of the importance of faith and submission to their Creator. There is special importance dedicated to the Friday prayer, which is also known as Jumaa Namaz. This prayer is performed in congregation at the local Mosque and is led by an Imam (leader). Allah says:

“Indeed, those who believe and do righteous deeds and establish prayer and give zakah will have their reward with their Lord, and there will be no fear concerning them, nor will they grieve.” (Surah Al-Baqarah 2:277)