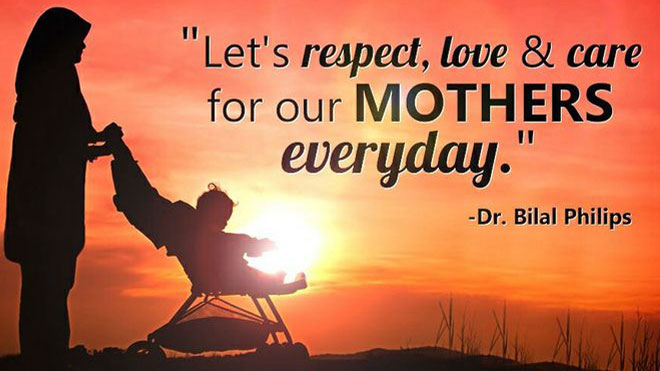 Islam honours the mother higher than any other religion on earth. The mother who is cherished that much by Islam and given all these rights has a task to perform. Allah, the Most Beneficent, has repeatedly emphasized the right of parents in general and the mother in particular. Mothers have the greater right and deserve more kindness, help service, good treatment and companionship than the fathers because the mother is the first one to care for the children and she suffers more directly with daily hardships in their upbringing. Allah, the Exalted, states in the Qur’an: Allah says:

“And has decreed your Lord, that (do) not worship except Him Alone and to the (be) good. Whether reach with you the old age one of them, or both of them, then (do) not say to both of them a word of disrespect and (do) not repel them, but speak to them a word noble.” (Surah Al-Isra 17:23)

A Muslim woman has a very important role as a mother. The status and value attached to parents in the Muslim world are very high. A woman becomes complete when she becomes a mother. Enjoying her power of creativity and grade of superiority over men, she experiences those precious feelings and senses, which nature gives only to woman. There is no doubt that as a mother, she is superior to a man and is the nucleus of her family. Allah says:

Mothers in Islam are held in very high esteem. Muslims are instructed to be kind, obedient and gentle to both parents. One is required to be patient with them, respect them, provide for them, and serve them. On multiple occasions, Allah has mentioned the orders of being kind to one’s parents immediately after those of servitude of Allah. One of the most amazing things about Islam is Islam gives mothers (as well as any woman)  the highest position and commands children to be grateful, respectful, kind and obedient to their mothers.

The following are some of the things which make Mother so unique:

The word mother is not only a word. It’s a blessing and a gift from Almighty Allah. It is the first word a baby utters, loves and calls out loud no matter it is a happy or sad moment of its life. The mother-child relationship is the most important one and it’s reciprocal. A mother loves her baby without any condition, bears pain with a smile and sacrifices everything without any complaint. When the babies grow up, it’s their duty and responsibility to be kind and at the service of their parents, especially their mother. Allah says:

As we grow up, we do not need our mothers and old age, sometimes, makes them irritable. Many people begin to think of them as irksome burdens. Islam forbids us to ever be rude to them or neglect them or their rights. Prophet Muhammad, peace and blessings are upon him and his progeny has said: “Paradise lies at the feet of mothers.” In other words, Paradise awaits those who cherish and respect their mothers.

The Muslim mother has consequently a great feeling of security about the type of care and consideration she can expect from her children when she reaches old age. As the verse of Noble Qur’an quoted above indicates, thankfulness to parents is linked with thankfulness to Allah, and a failure in either of these respects is indeed a major failure in one’s religious duties. Allah says:

“Your Lord (is) most knowing of what (is) in yourselves. If you are righteous, then indeed, He is to those who often turn (to Hi Most Forgiving.” (Surah Al-Isra’ 17:25)

Mothers are given priority over fathers in terms of special kindness, care, duty, help, and obedience. Both parents, by Islamic teachings and principles, are to be obeyed, respected and not differed as long as they do not command or order their children to disobey their Creator. Allah says:

“And a tree (that) springs forth from Mount Sinai (which) produces oil and a relish for those who eat.” (Surah Al-Isra 23-20)

In universal religion Islam, the mother has three times more rights over her offspring than their father because of her significant and crucial role in their birth, brought-up, and home education. Mother has to take care of her children, raise them well, implant virtues, and make them detest evil. She has to teach them to obey Allah, encourage them to defend what is truthful, not dissuade them from fighting for the sake of Allah (one form of jihad) because of the motherly sentiments in her heart but to favour the correct way over sentiment.