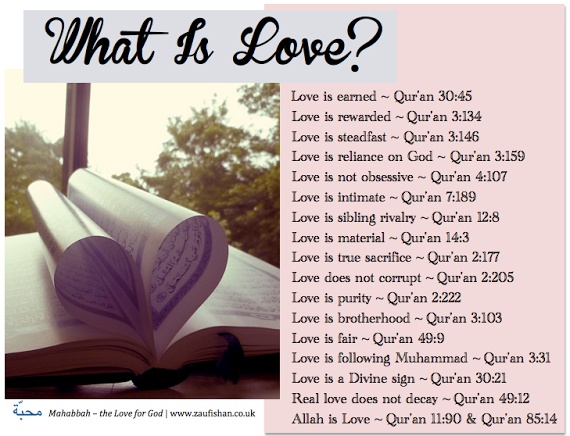 Islam calls for is the Love of Allah (SWT), praise is to Him. This love makes you avoid committing sins in order not to make whom you love, Allah, get angry with you. This love also urges you to contemplate all the different aspect of nature that usually leads you to have a deeper faith in the Creator who created all this beauty around us. Allah is closer to you than your limbs and your thoughts that run in your mind right now as you read those words. He is Nearer to you than anyone. So, speak to Him. Don’t give up or feel shy or run away from Allah no matter what you’ve done. Allah says:

“And among His Signs (is) that He created for you from yourselves mates that you may find tranquillity in them; and He placed between you love and mercy. Indeed, in that surely (are) Signs for a people who reflect.” (Surah Ar-Rum 30: 21)

“He (is) the One Who created for you what (is) in the earth, all. Moreover, He turned to the heaven and fashioned them seven heavens. And He of everything (is) All-Knowing.” (Surah Al-Baqara, 2:29)

Also, this love is an indication of the love of Allah (SWT) as stated in the Noble Qur’an, “Say: ‘If you do love Allah, Follow me: Allah will love you and forgive you your sins: For Allah is Oft-Forgiving, Most Merciful. Allah says:

Say, “If you love Allah, then follow Allah will love you and He will forgive for you your sins. And Allah (is) Oft-Forgiving, Most Merciful.” (Surah Al Imran, 3:31)

No religion urges its followers to adopt mutual love, affection, and intimacy like the religion of Islam. This should be the case at all times, not just on specific days. Islam encourages showing affection and love towards each other all the time. In other words, this love is acceptable as long as it is within the framework of marriage. Allah says:

“And among His Signs (is) that He created you from dust then behold! You (are) human beings dispersing.” (Surah Ar-Rum 30:20)

There are loves inside a human. All humans surely want to have it, feeling love makes humans feel happy and peaceful. Generally, love is only shown to other humans,  even though true love is only for Allah Almighty and  His Prophet Muhamad SAW. Loves between sexes are not forbidden, because Allah gives happiness and love through it. Allah allows Muslims to love each other provided that is not break the rules.

Love someone who loves you for the sake of Allah (SWT):

Islam enjoins the general concept of love between mankind as well. This is first and foremost done by promoting the love of God amongst our fellow man. This is manifested through our practice of the concept of “rahmah” which can be translated as love, mercy, compassion or forgiveness.

Aside from the fact that one who loves God is loved by Him (5:54), a real love for God prompts one to perform the best of deeds. Reason and nature dictate that if someone loves God, he would act in a manner that is pleasing to God.

Once your heart is linked with Allah it develops the following traits:

“In whatever form what He willed, He assembled you.” (Surah Al-Infitar, 82:7)

He gave a man the bounty of humanity. He also gave a man the bounties of guidance and belief. They are all the bounties that were given to man. Quran was the last Holy book that Allah Almighty revealed and gives to humans by His Prophet Muhammad SAW. Allah revealed the Quran is not just for good or bad deeds or prayers or tells about rules or being the greatest of Holy book with beautiful structure language. Allah says:

Islam also shows how to show love towards one another over the couple (marital) and the main love of us towards parents who have raised us from childhood. Hopefully, information regarding these Quran Verses about Love can be useful for all Muslims wherever we were. Allah says:

“Certainly, (has) come to you a Messenger from yourselves. Grievous to him (is) what you suffer, (he is) concerned over you, to the believers (he is) kind (and) merciful.” (Surah At-Tawba: 128)

Life is all about a test of realization and action. We are drawn to a realization of God’s love to us and leading a life of gratitude, which reflects our deep adoration and devotion to God. We do this hoping that our beloved Creator will be pleased with us and yearning to be with Him for eternity in the bliss of the hereafter. This well-known concept of the purpose of life according to Islam perfectly reflects the meaning of man’s love for God. May Allah Most High guide us to be linked to Him with all sincerity.