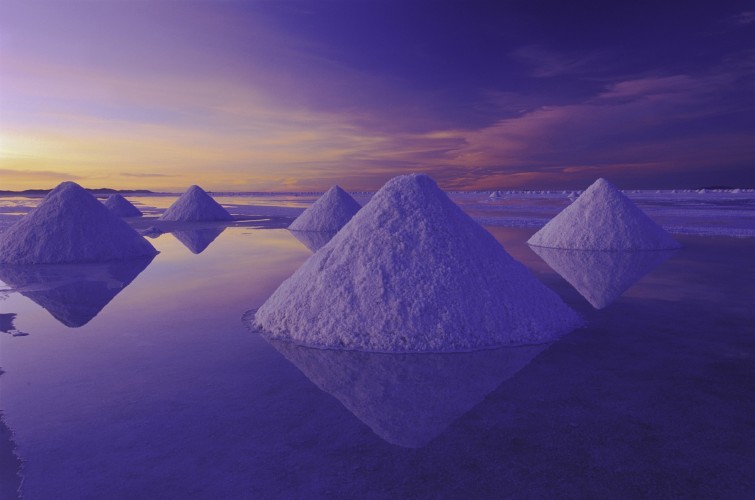 Salar de Uyuni, amid the Andes in southwest Bolivia, is the world’s largest salt flat. It’s the legacy of a prehistoric lake that went dry, leaving behind a desertlike, nearly 11,000-sq.-km. the landscape of bright-white salt, rock formations and cacti-studded islands. Its otherworldly expanse can be observed from central Incahuasi Island. Though wildlife is rare in this unique ecosystem, it harbours many pink flamingos.

Pyramids of salt reflect the pink hues of predawn light rising above the Salar de Uyuni in the Altiplano of central Bolivia. The salt flat is one of the largest in the world and a remnant of an ancient lake. Bolivia’s Salar de Uyuni is considered one of the most extreme and remarkable vistas in all of South America, if not Earth. Stretching more than 4,050 square miles of the Altiplano, it is the world’s largest salt flat, left behind by prehistoric lakes evaporated long ago. Here, a thick crust of salt extends to the horizon, covered by quilted, polygonal patterns of salt rising from the ground.

At certain times of the year, nearby lakes overflow and a thin layer of water transform the flats into a stunning reflection of the sky. This beautiful and otherworldly terrain serves as a lucrative extraction site for salt and lithium—the element responsible for powering laptops, smartphones, and electric cars.

You’d think that the day you confused the ground with the sky would be the day your sanity left you. But it’s totally excusable upon the world’s largest salt flat, Salar de Uyuni. During the wet season, a thin layer of water tops off the vast plains of white, salted earth. In turn, a sunny blue sky becomes perfectly transcribed upon the very ground you stand on, creating a dreamy sensation of psychedelia.