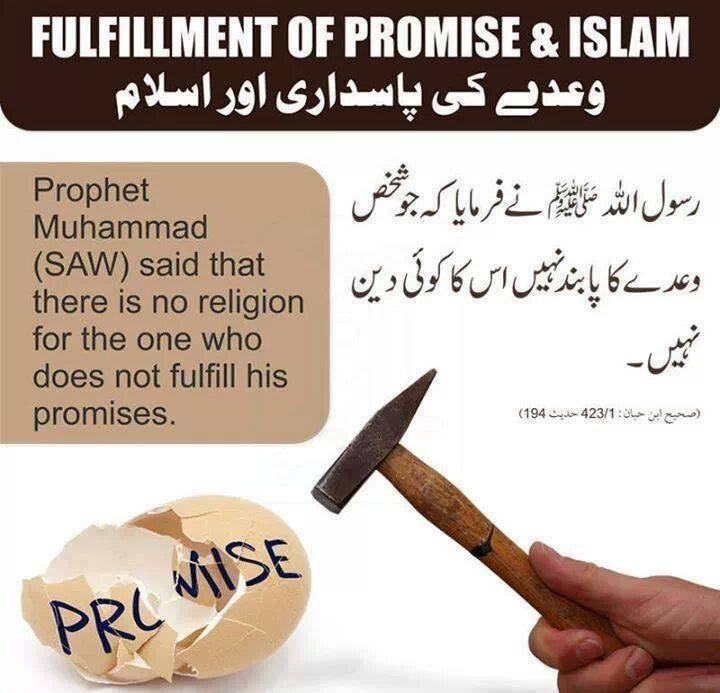 Islam teaches that the real rank of humans is, in fact, their eternal rank, which is their rank with God, and their rank in the Hereafter. Islam is a religion that provides a holistic way of living, including the right and the wrong action which should be and should not be done. One of the most sensitive issues in Islam (and life in general) is keeping promises. Promise and covenant is not something trivial in Islam. It’s a big matter when a Muslim makes a promise, to Allah SWT or a fellow human. Allah says:

“The Fire shall not touch us but for a few numbered days:” Say: “Have ye taken a promise from Allah, for He never breaks His promise? or is it that ye say of Allah what ye do not know?” (Surah Al-Baqara, 2:80)

Breaking promises is not among the good characteristic of a Muslim. When someone breaks his promises, he fails to have it. But we never know what might happen in the future. When Allah SWT is not allowing us to, we might not be able to fulfil our promises. Surely, there are two kinds of promise-breaking: when a person doesn’t purposely break it and second when someone makes promises he knows he can’t fulfil. Allah says:

“Indeed, the hypocrites (will be) in the lowest depths of the Fire, and never you will find for them any helper.” (Surah An-Nisa` 4:145)

The word and promises that a Muslim made, either it vows or covenants are the extension of a vow from Allah SWT. As God never tells lie, a servant who made promises should fulfil it. Being forced is one of the impediments that make it permissible for a Muslim to break his promise, such as one who is detained or is prevented from fulfilling his promise, or who is threatened with a painful punishment. Allah says:

Fulfilling promises is a means of attaining security in this world and preventing bloodshed, and of protecting the rights of people, both Muslims and kaafirs.

Here are some rewards for keeping a promise in Islam:

Whoever promises someone that he will do something haraam for him, or that he will not do something obligatory, it is not permissible for him to fulfil that promise. Keeping promises may seem simple, but it’s one of the many ways to gain the love of Allah SWT. Nothing matters most in the world but the love of God. It’s a huge disadvantage if we fail. Allah says:

“O, my people! did not your Lord make a handsome promise to you? Did then the promise seem to you long (incoming)? Or did ye desire that Wrath should descend from your Lord on you, and so ye broke your promise to me?” (Surah Ta-Ha, 20:86)

Humans commit sins now and then, even when we don’t realize it. But be careful if the sin we committed is one of the biggest sins, especially when we do it on purpose. If something unforeseen happens to the one who made the promise, such as sickness, the death of a relative or breakdown of his means of transportation, etc. Allah says:

“Those that keep their plighted faith and act aright,-verily God loves those who act aright.” (Surah Al-Imran 3:76)

Allah has decreed for fulfilling promises of great benefits in this world and the Hereafter, in addition to the obvious benefits of creating a righteous and stable society. Beware of making promises, since it will be questioned in the Hereafter. Allah says:

Say, “Belief in it or (do) not believe. Indeed, those who were given the knowledge before it, when it is recited to them, they fall on their faces (in) prostration.” (Surah Al-Isra, 17:108)

Fulfilling promises is one of the attributes of the pious according to the Book of Allah, and it is one of the greatest means of attaining taqwa (piety, the consciousness of Allah). Allah says (interpretation of the meaning). Allah says:

“Allah keeps firm those who believe with the firm word in the life (of) the world and in the Hereafter. And Allah lets go astray the wrongdoers. And Allah does what He wills.” (Surah İbrahim, 14:27)

Fearing Allah SWT is very important since it’s how we can live our lives rightly. But if we don’t fulfil our promises, it means we have proved no fear of Allah SWT.So those are all the laws of not keeping the promise in Islam. Be careful since you can commit a huge sin in Islam. Don’t say vows or promises so easily that you might get trapped into it someday. Allah exhorts us to exercise patience and be steadfast amidst trial and calamity. Be rest assured that Allah’s promise will come to pass, no matter how long it may take.