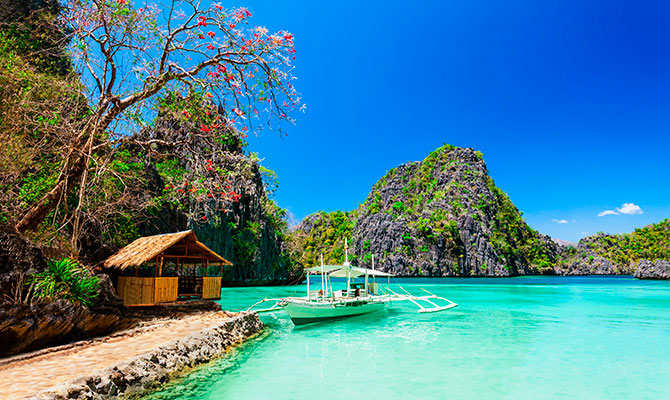 Palawan, officially the Province of Palawan is an archipelagic province of the Philippines that is located in the region of MIMAROPA. It is the largest province in the country in terms of total area of jurisdiction.Palawan is the Philippine’s answer to paradise. This island province stretches southwest to Borneo with lush limestone peaks rising from a jewel-like sea so clear, that you can almost see the expressions on the fish from above the surface.

Slivers of gleaming white sand fringed with rustling palms rim many of these jungle-clad islands, while under the water, coral reefs flourish with an impressive diversity of tropical fish, offering some of the best diving in the world. Other attractions include the islands’ unique wildlife, emerald lakes, and quaint fishing villages. Coron is home to plush resorts, and El Nido drips with natural beauty and is one of the most alluring islands in the chain.

Palawan Island Philippines is the largest island. The island is half desert, so still undeveloped. You can enjoy the jungle, mountains, and white beaches. Palawan Islandhas been rated by National Geographic Traveler magazine as best Southeast Asia region in 2007, and the 13th best island in the world! Isthe most biodiverse islands in the Philippines. Palawan is an archipelago with 1,780 islands on the western part.

Due to amazing  landscapes and high bio-diversity, Palawan island is known as “The Last Ecological Frontier of the Philippines”. From here, you can island hop around the spectacular Bacuit archipelago. One of Palawan’s top attractions is the World Heritage-listed Puerto Princesa Subterranean River National Park, an impressive limestone cave system with a long underground river.