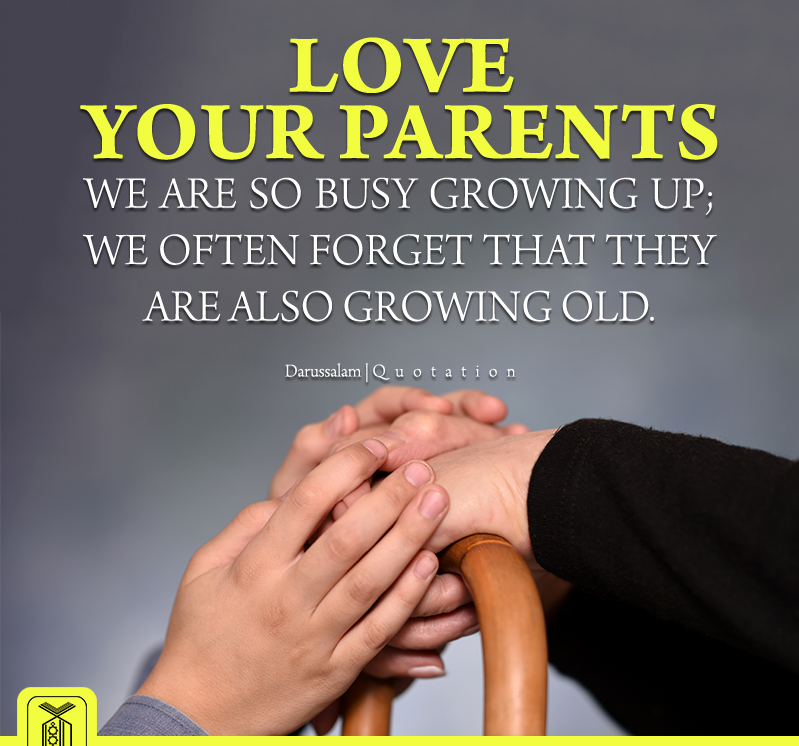 Parents are to be treated well at all times, and The Almighty’s blessings in having enabled you to do this virtuous act, be considered a great asset in this world as well as in the Hereafter. The respect we ought to pay our parents has been time and again emphasized in the Holy Qur’an. In one of the verses it is stated: Allah says:

“And has decreed your Lord, that (do) not worship except Him Alone and to the (be) good. Whether reach with you the old age one of them, or both of them, then (do) not say to both of them a word of disrespect and (do) not repel them, but speak to them a word noble. “ (Surah Al-Isra 17:23)

Be grateful to your parents. It is one of the cardinal principles of good manners and the acknowledgement of debt. One should be grateful to the parents for all the kindness, extraordinary love, and unparalleled sacrifices they undergo in bringing us up. The Almighty has decreed that when we render thanks to Him, we should express gratitude to our parents as well. Allah says:

“And we have enjoined on man (To be good) to his parents: In travail upon travail did his mother bear him. And in years twain was his weaning: (hear the command), ‘Show gratitude to Me and thy parents: to Me is (thy final) Goal.” (Surah Luqman31:14)

On the authority of Hazrat Abu Ayub Khalid Ibun Zaid Al-Ansari(R.A.), who said: A man requested; “Prophet (S.A.W)! Tell me the action which will get me admitted to Paradise and keep me away from Hell.” He answered: “Worship Almighty and do not associate anybody with Him: establish Prayer; pay Zakat and join the ties of kinship.” (Bukhari and Muslim)

“And We have enjoined (on) man goodness to his parents, but if they both strive against you to make you associate with Me what not you have of it any knowledge, then (do) not obey both of them. To Me (is) your return, and I  will inform you about what you used (to) do.” (Surah Al-’Ankabūt 29:8)

On the authority of Abu Sufyan Sakhr Harb (R.A.), who said: During his meeting with Hercules, the Roman Ruler, the latter asked him; ‘What does your Prophet (S.A.W.) ask you to do?’ I said: ‘He asked us to worship only One God, and not to associate anybody with him; not to follow the habits and practices of our ancestors; he further asks us to perform prayers (Salat), tell the truth, keep chaste, and to treat our blood relations well.’ -(Bukhari and Muslim)

“But if they strive against you on that you associate partners with Me what not you have of it any knowledge, then (do) not obey both of them. But accompany them in the world (with) kindness, and follow (the) path (of him) who turns to Me. Then towards Me (is) your return, I will inform you of what you used (to) do.” (Surah Luqman 31:15)

On the authority of Jubair bin Mut’im (R.A.), who said: “The Prophet (S.A.W.) said: “He who breaks off the ties of blood will not enter Paradise.” (Bukhari and Muslim)

On the authority of Abu Usaid Malik Ibn Rubia Al-Saedi (R.A), who said: While we were sitting with the Prophet (S.A.W.) a man of the Bani Salamah tribe came and said: “O Prophet (S.A.W.)! Is there anything, I can now do in benevolence towards my parents after their death? The Prophet (S.A.W.) answered: “Yes, by praying for them and soliciting mercy and forgiveness towards them, fulfilling their promises and undertakings, doing kindness to those who may be related to you through them, and respecting their friends.” -(Abu Daoud)

You should always try to please your parents and avoid deeds that may hurt their feelings, especially when they get old and short-tempered. In old age, people do tend to make unusual demands and claims but it should be tolerated cheerfully without any retort in anger or frustration.

Parents should be served earnestly and with sincerity; always keeping in mind the unparalleled kindness and affection shown by them. It is the service of our parents that would lead to our redemption and earn for us The Almighty’s blessings.

Your Love and Obligation towards Your Parents

Love your parents and this love should be regarded as an honour and means of recompense and redemption in the Hereafter. Hadrat Ibn Abbas narrates the following Hadith of the Holy Prophet (PBUH):

“Dutiful and good-natured children who cast one loving and affectionate look at their parents, receive from The Almighty blessing equivalent to one approved Hajj (pilgrimage).” (Muslim)

When the Parents are Non-Muslims

Even if the parents are non-Muslims, they are to be treated well and all courtesy be shown to them. But obedience in matters of religion should be refused and they are not to be followed if they ask you to commit a sin or an act of associating somebody with The Almighty. Allah says:

We need to obey our parents because nature demands it. Our parents brought us into this world, protected us and provided for our needs when we were young and helpless. They love us dearly and are always prepared to sacrifice their enjoyments, comforts even their lives for our sake.

We should apply the following advice:

Being patient and tolerant with parents: The children must take great care not to react to what their parents have to say. If they say or do anything which is not liked or approved of by the children, then they must show patience and tolerance instead of giving vent to their anger. The children must scrupulously try to refrain from disobeying their parents since the Prophet Sallallahu `Alayhi Wa Sallam ( may Allah exalt his mention ) regarded this as one of the grave sins.

Supplicating for them: We must continue praying for them even after they die. Such prayer will be regarded as a continuous charity as the Prophet, Sallallahu Alayhi Wa Sallam, told us. Far from showing signs of displeasure, the children must pray for them.

The greater right of the mother: The children must be kinder and more grateful to their mothers since they took greater pains in their upbringing. That is why the Prophet Sallallahu `Alayhi Wa Sallam ( may Allah exalt his mention ) emphasized that it is the mother who has the first claim on the child’s care and attention.

Recognizing their great status: The Muslim should recognize the status of the parent and know his duties towards them. The status of parents in Islam is a status that mankind had not known before. Allah Has placed the respect for the parents just one step below the belief in Allah and true worship of Him. Allah says:

“And We have enjoined (on) man goodness to his parents, but if they both strive against you to make you associate with Me what not you have of it any knowledge, then (do) not obey both of them. To Me (is) your return, and I will inform you about what you used (to) do.” (Surah Al-‘Ankabut 29:8)

The Prophet Sallallahu `Alayhi Wa Sallam ( may Allah exalt his mention ) placed kindness and respect towards parents just after the prayer offered on time as the prayer is the foundation of Islam.

Knowing the duties towards them: The child also must provide for his parents if he can do so. The Quran sums up the whole matter in a master concept called Ihsaan, which denotes what is right, good and beautiful

Prayers for Parents: Always pray for your parents, recalling their kindness and beg for their weal from The Almighty and His Mercies for them. It is mentioned in the Holy Qur’an:

Special Treatment of the Mother: One should have special regard for his/her mother. It is the mother that carries the fetus in her womb for nine months and then nourishes the child with her milk. It is stated in the Holy Qur’an: Allah said:

“Say, “Do you see if it is from Allah and you disbelieve in it and testifies a witness from (the) Children of Israel to (the) like thereof, then he believed while you are arrogant?” Indeed, Allah (does) not guide the people the wrongdoers.” (Surah Al-Ahqaf 46:10)

Obedience pays off in the long run. If children obey their parents, life would be much better for the family. The parents would be pleased with their children and the children would probably stay out of trouble. Obedience to our parents pleases the Lord because it is one way we show our parents and God that we love them. The Lord Himself is pleased particularly if our obedience is modelled after Christ’s wholehearted obedience to the Father.