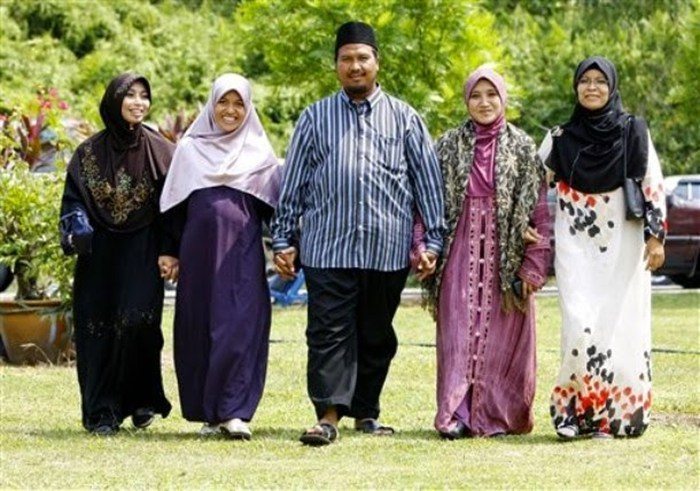 One of the most beautiful laws of Islam is in regard to the guardianship and treatment of women. One cannot truly love and worship Allah (SWT) without agreeing with the rights of the female, and more specifically, the rights of the wives. Islam allows the practice of “polygyny”, not necessarily “polygamy”. The two terms are easily confused. Polygamy is most often understood to be a practice that allows any male or female to be married to an unlimited number of spouses at the same time. Polygyny specifically allows only the male to have more than one wife at the same time, as we find to be the case within the laws of Islam. Allaah says:

All the marriages of the Prophet, other than that with Lady Khadija, had a good political or religious rationale. Marriage in Islam is a sign of God’s power and glory. The Quran says:

“And among His Signs (is) that He created for you from yourselves mates that you may find tranquillity in them; and He placed between you love and mercy. Indeed, in that surely (are) Signs for a people who reflect.” (Surah Ar-Rum, 30:21)

“And let those who cannot find someone to marry maintain chastity until Allah (SWT) makes them rich through His favours…” (Surah 24, Verse 33)

“Our Lord! And admit them (to) Gardens (of) Eden which You have promised them and whoever (was) righteous among their fathers and their spouses and their offspring. Indeed You, You (are) the All-Mighty, the All-Wise.” (Surah Ghafir 40:8)

Lust and heart-filled eyes are never the best reason to marry, and it will never be what makes a marriage substantial and long-lasting. Sometimes widows and divorcees need a husband, a provider. Sometimes children need a father, a guardian. Modern society tells us that marriage based on lust is the best way to go, but every day we watch these marriages fizzle out in divorce and unlawful infidelity. Allah says:

For this is the Islamic “polygamy” which people in the West consider so abhorrent and to which they react with such hostility, while their own men are free to have any number of girlfriends, without restriction and without any legal or moral accountability, either in respect to the woman or to the children she may bear as a result of this irreligious and immoral plurality of extra-marital relationships. Allah says:

“And if a woman fears from her husband ill-conduct or desertion then (there is) no sin on both of them that they make terms of peace between themselves – a reconciliation and [the] reconciliation (is) best. And are swayed the souls (by) greed. But if you do good and consciously revere (Allah) then indeed, Allah is of what you do All-Aware.” (Surah An-Nisa, 4:128)

So if there is a fear that one cannot deal justly or one can oppress, then the principle of being content with one woman becomes valid. Islam does not place a burden on man greater than he can bear. When Prophet Muhammad was young and wealthy, he had only one wife. But in the last thirteen years of his life when he was over fifty, he married different wives––with the exception of one, all were widows and old.