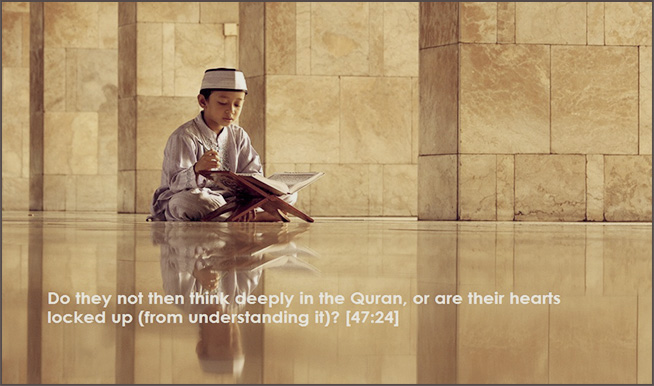 As Muslims, we believe this life to be a test for the life hereafter. The primary guideline for this test’s preparation comes from the Quran, the divine revelation and the Hadiths of the Prophet Muhammad PBUH. This book; “Real Life Lessons from the Holy Quran” aims at helping fellow Muslims to understand the Islamic way of living in the 21st century and become better human beings. It provides powerful words of advice on how to handle different situations, perform certain tasks, avoid particular actions and win the struggle against Satan, as guided by Allah SWT. Allah says:

One of the bases of “that old-time religion” is a healthy fear of God. That fear, which has to be balanced by hope for God’s mercy, revolves around the awareness that God’s punishment is real. Hell and its torments are real. The retribution of those who have behaved wrongfully in the world is real. Sometimes we can become so engrossed with intellectualized discussions of our religion, so steeped in philosophical discourse, that we forget, at the end of the day, the hard realities mentioned above. Allah says:

And they (will) say, “All praises (be) to Allah the One Who (has) removed from us the sorrow. Indeed, our Lord (is) surely Oft-Forgiving, Most Appreciative.” (Surah Fatir 35:34)

If as adults we are heedless concerning these things, it is difficult for us to realize their importance for our children, especially during their formative years. Compassion and respect towards the elderly is an essential element of Islamic conduct. The Prophet of Islam stated clearly:

Cultivating a healthy fear of God is rooted in the mindfulness of Him. Mindfulness is a prerequisite for fear. For this reason, one of the initial goals of the spiritual path is cultivating the fear of God. This is the initial thrust that propels the aspirant through subsequent stages of true human development.  This fear is one of the keys to Paradise. Allah says:

“But as for (him) who feared to stand (before) his Lord, and restrained his soul from the vain desires.” (Surah An-Nazi’at 79:40)

Hence, the fear of God is something we should endeavour to instil in our children. One way to do that is to remind them that transgression incurs punishment. That punishment can occur in ways great and small. We can take advantage of situations occurring in our everyday lives to cultivate a repentant spirit in our children. If they tell a lie, we can mention how inappropriate and harmful lies are. We can then add, “You are going to have to ask God to forgive you.” Not only do situations such as this introduce the child to the idea of repentance but, they also encourage them to get in the habit of communicating with God. One of the things missing from many of our Muslim homes is active communion with God. Allah says:

We should try to make the space for the children to be children, to enjoy their childhood years. However, we must let them know that these years are preparation for adult life and that adulthood is very serious. That coming seriousness though should not be used as a justification to overwhelm them. Moderation provides a golden means. Respecting that means helps us to avoid the extreme of an overindulgent childhood followed by a period of perpetual adolescence, just as it helps us to avoid stultifying, rigid, overbearing child-rearing practices that can effectively rob our children of a rich childhood.

We can change for the better if we are sincerely willing to. Let us learn to have a healthier lifestyle, to benefit from the people around us, to make better use of our time and to not allow Dunya to devour our most valuable years on this planet. May God helps us all, to fulfil our duties towards our elderly, to love and respect them as they ought to be loved and respected, and to set a good example for our children.