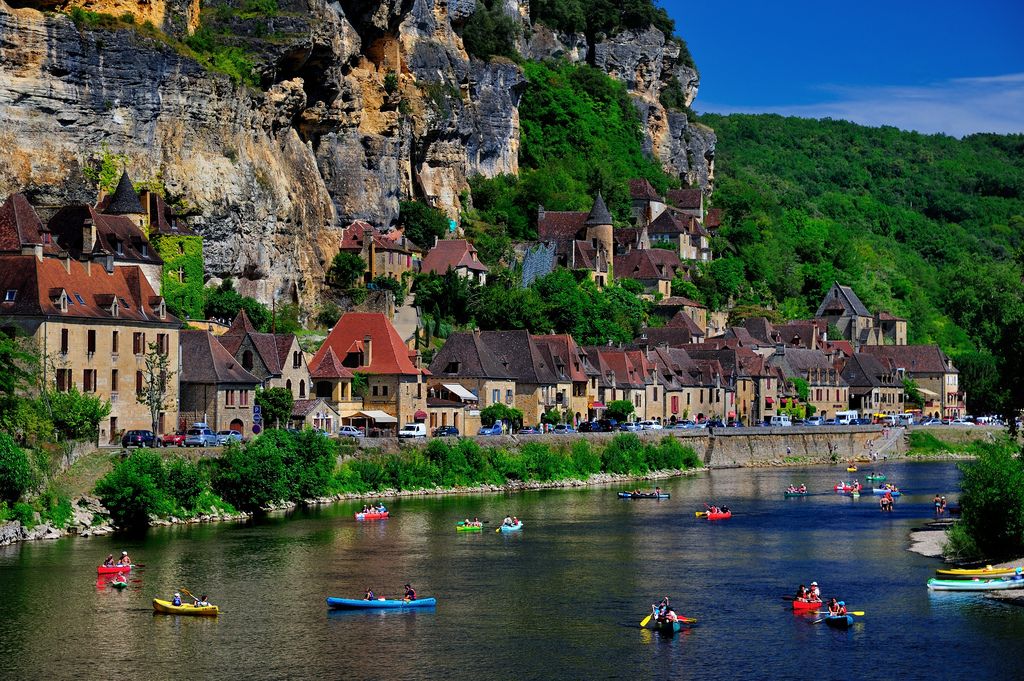 Situated at the foot of a cliff along the Dordogne River, the village of La Roque-Gageac offers visitors a network of narrow streets, a troglodyte fort, tropical vegetation and a small church that dominates the valley.La Roque Gageac is one of France’s most beautiful villages. In a stunning position on the north bank of the Dordogne River, and backed by a steep hill / cliffs, with little to suggest that much has changed there in the last 300 years, La Roque-Gageac is truly the perfect picture postcard village. It is about 8km from the historic town of Sarlat.

The golden yellow houses with their traditional perigord rooves, line the river and spread up the hill behind. While some of the properties in La Roque Gageac are quite modest, there is also an impressive number of grand houses among them. One of the grandest of these is near the road as you enter from Beynac – the 19th century (although it appears older) Chateau de la Malartrie built in Renaissance style.

The troglodyte fort set in the cliffs 40 metres above La Roque Gageac is fascinating, and significant vestiges of the 12th century construction are still standing. The strong defensive position of La Roque Gageac and the fortress whose defences continued to be elaborated up to the 17th century meant that it held an important strategic and defensive position in the area.

La Roque Gageac has always been an important trading point on the Dordogne river with goods being carried by traditional boats called ‘gabares’. Replicas of these boats are now used for hour long river cruises.

The village of La Roque-Gageac, ranked among the most beautiful villages in France, is nestled between the cliffs and the Dordogne. It enjoys a microclimate, almost Mediterranean, with its southern exposure.La Roque-Gageac and its inhabitants, the Laroquois, reserve you a warm welcome every year in this country of fine dining.