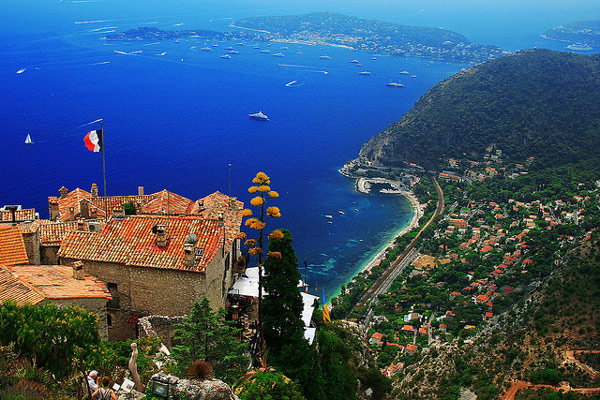 Èze is a commune in the Alpes-Maritimes department in southeastern France, not far from the city of Nice.A corniche is, in effect, a cliff road and there are three of these on the French Riviera, that cling quite precariously to the very steep cliffs. It takes a skilled, or reckless driver to negotiate many of the turns on these corniche roads, and from what we experienced with our tour guide, reckless is the only way to drive. In saying that, she was able to tell us a lot about both Eze and Monte Carlo while negotiating hairpin bends.

Èze is a mesmerizing medieval village located about half way between Monte Carlo and Nice. The real appeal of the Côte d’Azur lies amongst the magnificent views over the St Jean-Cap Ferrat, which is located in the ancient village of Èze. Traffic along the coastal road between Menton and Nice – the Moyenne Corniche, chokes up during early summer, the flights are more reasonable, and the swarm of tourists is much more manageable during Easter.

The region is famous for the many flowers that grow there, and there are a number of perfumeries to be explored, including the famous Fragonard perfume factory. Also, Jardin Exotique, the Exotic Garden costs 6 euro to explore the Mediterranean cacti, citrus trees, and tropical plants and to view the French Riveria coast, with views to Monaco and Monte Carlo.

The village centers on the remains of a 12th century castle – a testimony to centuries of livelihood, from Moors and Romans to the dwellings of Savoy and is suspended on a rock that is 1400 feet (400 meters) above sea level. Wandering through the village’s intricate streets, one cannot miss admiring the view over the exquisite villas that are wrapped with bougainvillea and lead you down the hillside to the Mediterranean.

The village is an admired tourist spot on the French Riviera and is globally known for its view of the sea from the hilltop. Another popular site includes the Jardin botanique d’Èze which is famous for its succulents and cactuses, as well as its breathtaking panoramic views. The village has several art galleries, restaurants and hotels that attract a vast population of honeymooners and travel enthusiasts. In other words, tourists also address this beautiful place as “the museum village”.