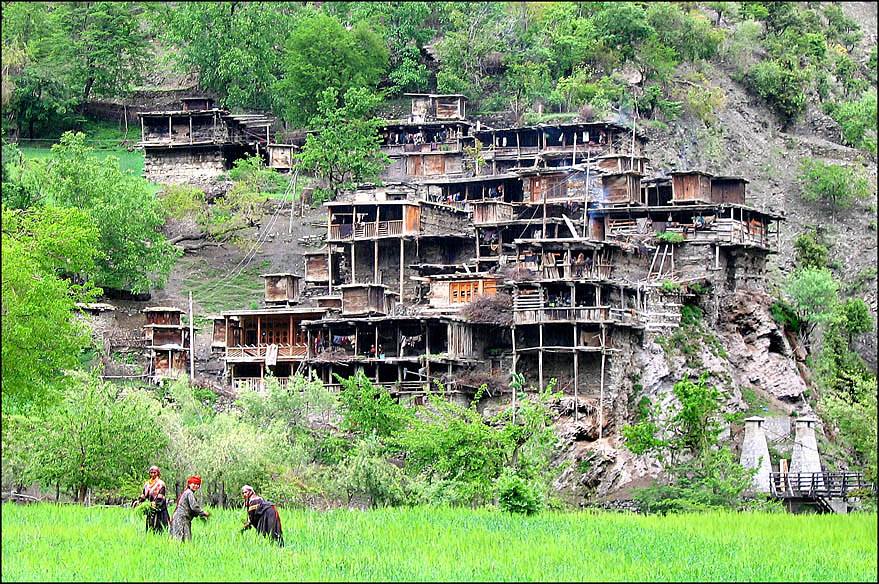 Kalash Valley is a group of three small valleys: Brir, Bumburet and Rambur. Brir lies at the southern most tip of Chitral at a distance of 34 km (21 miles) and is easily accessible by jeep-able road via Ayun. It is especially ideal for those not used to trekking. Bumburet, the largest and the most picturesque valley of the Kafir Kalash, is 36 km.(22 miles) from Chitral and is connected by a jeep-able road.
Rambur is 32 km (20 miles) from Chitral, the road is jeep-able.

The sound of the drums could be heard from all over the Kalash valley while, tens of young people, including plenty of girls wearing some very exotic and colorful dresses, were dancing to the music. The local men at the party were continuously offering me both home-made wine and some fruity liquor which tasted surprisingly good.

Kalash people have called the attention of numerous anthropologists from all over the world, who conducted several studies, trying to figure out where do they actually come from. However, many of them have shown different results and conclusions, which means that the actual origin of the Kalash tribe remains unknown.

Today, around 5,000 Kalash people live across 3 different valleys. Due to their remoteness, very far away from the civilization, today, the Kalash people live a traditional, rural life which still remains pretty untouched. Most families rely on the sun to have electricity, don’t have running water, are self-sufficient and live in wooden shacks. To be honest, life is quite hard here as they have very long, freezing winters and, unlike people from other parts of Pakistan, during winter, they don’t move to the cities but they remain in the valley.