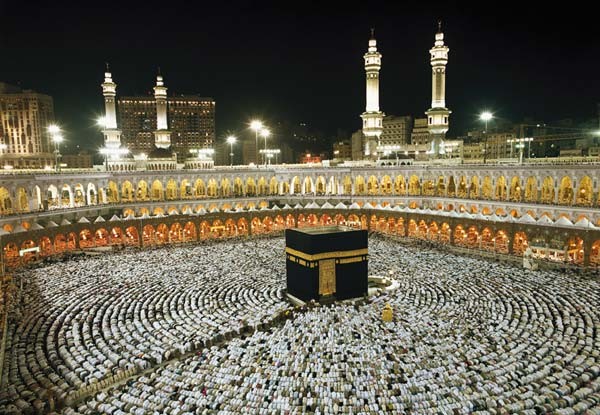 The Kaaba is a large cube-shaped building inside the mosque known as al-Masjid al-Haram in Mecca, Saudi Arabia. The mosque has hundreds of windows around it.  It is a cube-shaped stone structure that was built by Prophet Abraham and his son Ishmael on the same foundations where Prophet Adam is believed to have built a sanctuary for the worship of the One God. It is made of standard blocks, with black and gold cloth around it. In the five daily prayers, Muslims face the Kaaba in Mecca,  Allah says:

You only worship, besides Allah, idols, and you produce a falsehood. Indeed, those you worship besides Allah do not possess for you [the power of] provision. So seek from Allah provision and worship Him and be grateful to Him. To Him, you will be returned.” (Surah Al-‘Ankabut 29:17)

The Kaaba is the holiest place in Islam. Muslims do not worship the Kaaba. It serves as a focal point for Muslims around the world, unifying them in worship and symbolizing their common belief, spiritual focus, and direction. Interestingly the inside of the Kaaba is empty. Muslims are required to make a pilgrimage (hajj) once in a lifetime to the Kaaba. As it is the holiest place in Islam all Muslims pray towards this when they perform the five fardh (necessary acts mentioned in the Quran) Salaah or prayer. At the end of the Hajj season, there is a holiday called Eid al-Adha.

The Size of the Kaba

The current height of the Kaba is 39 feet, 6 inches and the total size comes to 627 square feet. The inside room of the Kaba is 13X9 meters. The Kaba’s walls are one meter wide. The floor inside is 2.2 meters higher than the place where people perform Tawaf.  Allah says:

“Indeed, the first House [of worship] established for mankind was that at Makkah – blessed and a guidance for the worlds.” (Surah Al Imran, 3:96)

The ceiling and roof are two levels made out of wood. They were reconstructed with teak which is capped with stainless steel. The walls are all made of stone. The stones inside are unpolished, while the ones outside are polished. This small building has been constructed and reconstructed by Prophets Adam, Ibrahim, Ismail and Muhammad (peace be upon them all). No other building has had this honour.

The other names of the Kaba

Kaba in Arabic means a high place with respect and prestige. The word Kaba may also be derivative of a word meaning a cube.

Some of these other names include:

Bait ul Ateeq-which means, according to one meaning, the earliest and ancient. According to the second meaning, it means independent and liberating. Both meanings could be taken

The Kaba has been reconstructed up to 12 times

Scholars and historians say that the Kaba has been reconstructed between five to 12 times.

The very first construction of the Kaba was done by Prophet Adam (peace be upon him). Allah says in the Quran that this was the first house that was built for humanity to worship Allah.

After this, Prophet Ibrahim and Ismail (peace be upon them) rebuilt the Kaba. The measurements of the Kaba’s Ibrahimic foundation are as follows:

Following this, there were several constructions before the Prophet Muhammad (peace and blessings be upon him) ‘s time.

What is inside the Kaba?

Here are just a couple of things that most individuals may not understand about the Kaaba.

It is a misconception in Non- Muslims that Muslims worship the holy Kaaba but it’s not true Muslims do not worship the Holy Kaaba. The Kaaba serves as a focal point for Muslims around the world, unifying them in worship and symbolizing their common belief, spiritual focus, and direction. Holy Kaaba is considered the most sacred place on earth as they go for offering Hajj according to the commands of Allah Almighty mentioned in the Holy Quran. Every Muslim who makes the pilgrimage is required to walk around the Kaaba seven times.  Allah says:

“And of His Signs (are) the night and the day and the sun and the moon. (Do) not prostrate to the sun and not to the moon, but prostrate to Allah the One Who created them, if you, Him alone, worship.” (Surah Fussilat 41:37)

Mecca, the birthplace of Islam and the holiest site to all the Muslims in the world and no matter how one looks at it, this valley in present-day Saudi Arabia is the most celebrated and blessed place on earth. One of the main reasons for the holiness of this area is the presence of the Kaaba, the holiest structure in Islam to which the entire Muslim population of the world face when praying to Allah (SWT). Thousands of people circle this holy structure every day daily.  Allah says:

The Kaaba is perhaps the most known building in the world and its architecture, covered in black cloth, is surrounded by centuries of History. Though most people know the Kaaba some things may not be known by many. Muslims are ordered to face Kaaba is made their Qibla (the direction) of prayers, only to unite them. Baitullah, the Holy Kaaba is not an idol but is in fact, the symbolic House of Allah and is the only centre point of prayers for approximately 1.5 billion Muslims all over the world.