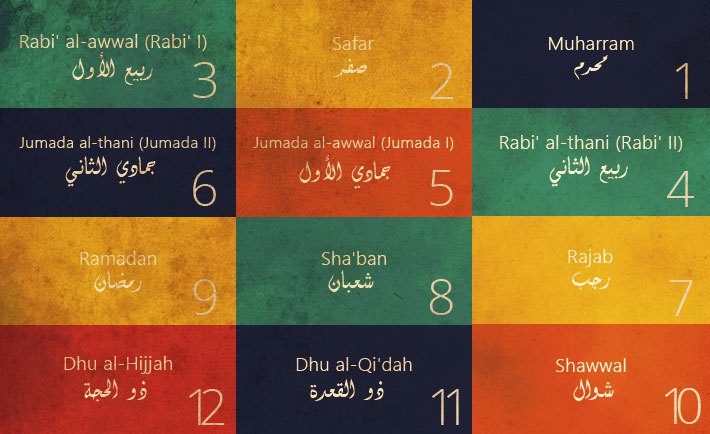 Monthly calendars play a vital role in the scheduling of time and important events in the lives of their respective followers. There are many kinds of almanacks made from people of different religions and regions for sake of knowing about specific traditions, occasions and holidays etc. like Gregorian (Christian), Chinese and Hijri (Islamic) calendars. All of such charts are based on the shifting of the Moon and contains approximately 30 days in each month because of the Moon`s shape and movements. Islam also shares the same concept of timetable as the Almighty Lord says in the Holy Quran: Allah says:

“It is He who made the sun a shining light and the moon a derived light and determined for it phases – that you may know the number of years and account [of time]. Allah has not created this except in truth. He details the signs for a people who know.” (Surah Yunus 10:5)

It was agreed that the most appropriate reference point for the Islamic calendar was the Hijrah since it was an important turning point for the Muslim community. Islamic calendars are based on the shifting of the moon and contain approximately 30 days each month because of the moon’s shape and movements. Allah Almighty says in the Holy Quran. Allah says:

Every month in Hijri Calendar there’re many of history or even of Islamic moments, commands of good deeds and bad deeds also listed here. Therefore below these’re the information about the twelve months of the Hijri Calendar and the importance of Islamic month (each month).

Below we will discuss the information regarding twelve months of the Islamic Hijri calendar with the importance of each Islamic month.

“The number of months with Allah Almighty is twelve by Allah’s law since the day He created the heavens and the earth. Of these four are holy. This is a straight reckoning. So do not exceed yourselves during them, but fight the idolaters to the end as they fight you in like manner, and remember Allah is with those who preserve themselves from evil and do the right.” (Surah At-Taubah 9:36)

The above-mentioned information related to the months of the Islamic calendar reminds us to increase our good deeds as Muslims. May Almighty Allah shower His blessings and mercy on all Muslims of the world! Ameen