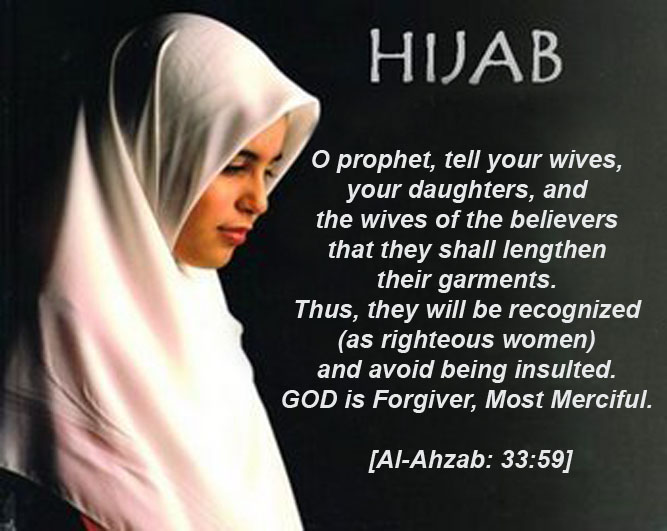 Hijab means “a veil,” “curtain,” “partition” or “separation.” The verse in which it is mentioned is specifically addressed to the wives of the prophet; there is no dispute among scholars about that at all. The Muslim woman is ordered to veil herself. She must not come before a mahram without Hijab. One of the highly effective ways of protecting society from the sin of adultery is that women wear hijab and ward off the evil glances of sensuous men. Allah says:

“Say to the believing men they should lower their gaze and they should guard their chastity. That (is) purer for them. Indeed, Allah (is) All-Aware of what they do.” (Surah Nur 24:31)

Every day tens of cases related to sexual crimes were heard in the courts of law. Every month tens of married mothers used to forsake their homes to enter into a perverse life of illicit sex. Due to the absence of Hijab, adultery and fornication became common and thousands of chaste women become immoral. A hijab encompasses more than a scarf and more than a dress code.  It is a term that denotes modest dressing and modest behaviour.

Here are some of the benefits of using hijab:

Hijab brings to the lives of women and the responsibility men and women share in upholding modesty in society. Along the way, it debunks common stereotypes and celebrates the voices of women who practice hijab with pride. Hijab gives women an air of authority, dignity, and respect. Only those who are well behaved can expect admiration and high esteem from others. Allah says:

“O children of Adam let not Satan tempt you as he removed your parents from Paradise, stripping them of their clothing to show them their private parts. Indeed, he sees you, he and his tribe, from where you do not see them. Indeed, We have made the devils allies to those who do not believe.” (Surah Al-A`raf, 7:27)

Hijab for Muslim Women is a covering for the care of chastity and an identity card to pronounce their respect for the laws of their Almighty Allah. It frees them from being valued for their looks, or body shape rather than their minds and intellect.

The majority of Muslim women wear hijab, to obey God, and to be known as respectable women:

The mixing of sexes and the absence of hijab destroys the Gheerah in men. Islam considers Gheerah an integral part of faith. The dignity of the wife or daughter or any other Muslim woman must be highly respected and defended. Hijab can be a symbol of piety and it can be a sign of great inner strength and fortitude.  A woman wearing a hijab becomes a very visible sign of Islam.

Do you know that:

God specifically addresses women when He asks them not to show off their adornment, except that which is apparent, and draw their veils over their bodies. The Quranic instructions are not only for women, there are instructions for men also. Allah says:

“Say to the believing men they should lower their gaze and they should guard their chastity. That (is) purer for them. Indeed, Allah (is) All-Aware of what they do.” (Surah An-Nur 24: 30)

Hijab is not a constraint for Muslim women, rather those who wear it wear it as an ornament that gives them respect as well as keeps them pious and free from any disturbance that may be caused because of any unintentional sexual innuendo. Hijab, in the sense of veiling, can also be achieved by hanging a curtain or placing a screen between women and men to allow them to speak to each other without changing the dress. This was more common in the early days of Islam, for the wives of the Prophet Muhammad.