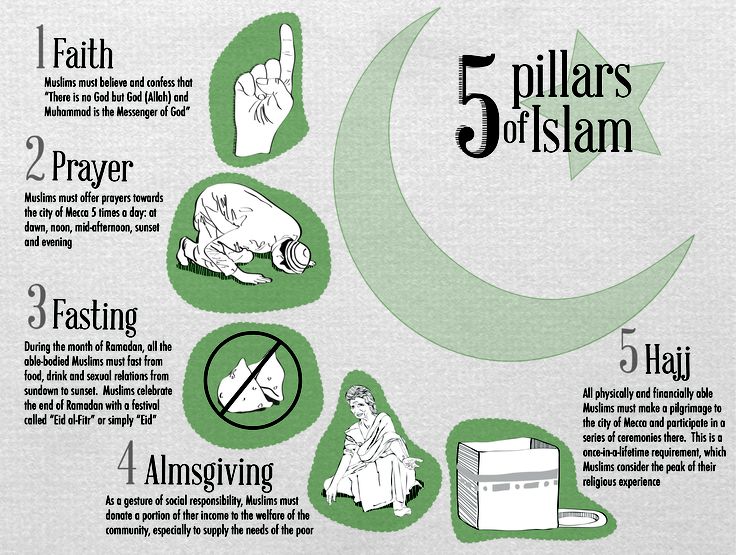 The Pillars are important acts of worship that develop the Muslim character and strengthen Islam. Muslims are commanded by Allah to carry out these duties and to follow the example of the Prophet (Sallallahu Alayhi wassallam) in the manner they perform these duties. These pillars form the foundation and starting point for all other good deeds and acts of worship to God.

That, There is no god but Allah, and Prophet Muhammad (Peace be upon him) is the messenger of God.

Islam encourages its followers to start, step by step, to learn those teachings so that they can worship Allah correctly and gain the great reward specified for them. The more they learn the more reward they will get.

“They had not been forbidding each other from wrongdoing they did [it]. Surely, evil (was) what they were doing.” (Surah Al-Ma`idah 5:79)

It is a religion of peace because it brings out real justice for everyone. Allah Almighty is beyond any comprehension or justification but even then He has shown his followers how just he is. The Holy Quran has stated various incidents and events which give us hints about his true nature. The 99 names of Allah Almighty include ‘Al-Adl’, the Just and ‘Al-Muqsio’ the Dispenser of Justice.

Islam is built upon the Five Pillars of Islam which are as follows:

Islam Is Based on Five

Benefits of the Five Pillars of Islam

Shahadah: The first pillar of Islam has some benefits that are mentioned below:

Prayer (Salah): Prayer is the second pillar of Islam its benefits are mentioned below:

Zakah (Charity): Zakah is the third pillar of Islam some of its benefits in Muslim’s life are mentioned below:

Fasting (Sawm): The fourth pillar of Islam is fasting which has so many benefits some of them are given below:

Pilgrimage (Hajj): The fifth pillar of Islam is Hajj (Pilgrimage), benefits of Hajj are mentioned below:

There is no higher aim for the Muslim than the cultivation of what is described as a sound heart because from the sound heart comes sound judgment. Therefore Muslims have been warned many times in the Holy Quran that if they seek mercy from the lord of all lords, they must show mercy and justice to their worldly fellows and creatures.

“O you who believe! Fulfil the contracts. Are made lawful for you the quadruped (of) the grazing livestock except what is recited on you, not being permitted (to) hunt while you (are in) Ihram. Indeed, Allah decrees what He wills.” (Surah Al-Ma’idah 5:1)

All the pillars are commanded by Allah but not all of them are duties for all Muslims, as those who are unable are excused by God. Those who are too ill to fast, or too poor to pay Zakah or go on Hajj, can still lead a life of total obedience to Allaah. That leaves the Prayer – those who cannot do the movements of the prayer because they are too sick or too old, can sit or even lie down to pray. Allah says:

“He created the heavens without pillars that you see and has cast in the earth firm mountains lest it (might) shake with you, and He dispersed in it from every creature. And We sent down from the sky water then We caused to grow therein of every kind noble.’ (Surah Luqman 31:10)

The acts of worship are so many. They include removing harm from the road, speaking to people nicely, helping the old and the weak, modesty and so on. However, the pillars of Islam are the greatest and the most important. The Declaration of faith is the most important of all.