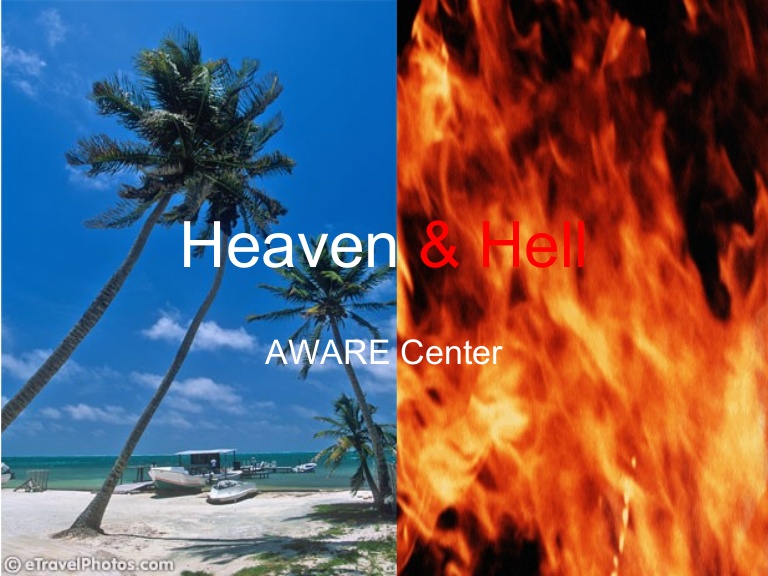 Muslims believe in the death and eternal life which comes after death. For leading a good life what actions and qualities are desirable, what impact will be in our hereafter life due to our actions and deeds in this life, we should know about the concept of heaven and hell. We Muslims believe on Judgment Day after that Allah Almighty will decide on the basis of individual deeds were to send in Jannah or Jahannam. Allah says:

“He (is) the One Who made the sun a shining light, and the moon a reflected light and determined for it phases, that you may know (the) number (of) the years and the count (of time). Not created Allah that except in truth. He explains the signs for a people (who) know.” (Surah Al-Ma’idah, 5: 10)

Every person has two places reserved for him: one in paradise and one in hell. If he leaves this world with faith and good deeds, he will occupy his place in heaven. If not, he will be cast into his place in hell. The particularities of his reward or punishment are determined by his actions in this world. Allah says:

“See how We preferred some of them over others. And surely the Hereafter (is) greater (in) degrees and greater (in) excellence.” (Surah Al-Isra, 17:21)

“Then is (he) who is on a clear proof from his Lord like (he) who is made attractive to him (the) evil (of) his deeds while they follow their desires.” (Surah Muhammad, 47:15)

From this verse of the Holy Quran, we can describe heaven in these words as paradise is like a garden in which there are beautiful women, flowing cups and juicy fruits, rivers of water, milk, wine and rivers of clear honey. Jahannam is an Arabic word, which means “a dark storm, a stern look, darkness” etc. which explains how inhospitable and a nuisance place it would be in the afterlife. Allah says:

“And consciously revere the Fire which is prepared for the disbelievers.” (Surah Al ‘Imran, 3: 131)

At a later period, Paradise was represented as a pyramid or cone in eight levels, it was given one more story than Hell as it was believed the election would be greater than the damned. Life after death presents a vista of progress and advancement far beyond anything conceivable in this world: Allah says:

Allah’s threats, warnings, promises, and glad tidings concerning heaven and hell are simply means of keeping human beings in line. It is not necessary that heaven and hell actually exist. The mere fact that people do good out of their desire for paradise and refrain from bad out of fear of hell, is in itself a virtual paradise.

Heaven in the Holy Quran:

Throughout our lives, we compete to believe and serve Allah Almighty so that we can gain Jannah in the hereafter. We can just imagine how paradise will be look alike. Only Allah Almighty knows it but He (SWT) describes it for us in the Holy Quran.

The concept of Hell in Islam

Those who are wrongdoers and disbelievers will definitely go to Hell or Jahannam. We should also know about hell and what people will enter into hell. Those who don’t believe in Allah Almighty and religion Islam will surely go to Jahannam but also those who believe in Islam and Allah Almighty but do bad deeds will also get punished for their actions. Allah says:

“Our Lord, indeed [You] whom You admit (to) the Fire then surely You (have) disgraced him, and not for the wrongdoers (are) any helpers.” (Surah Al ‘Imran 3:192)

Accepting the reality of Jannah and Jahannam is one of the basic six beliefs of the religion Islam. Hell is the place for sinners after the death on Judgment Day. In the Holy Quran, the word “Jahannam” and also “Al-Naar” is mentioned the most. Allah says::

“Your Lord (is) most knowing of what (is) in yourselves. If you are righteous, then indeed, He is to those who often turn (to Hi Most Forgiving.” (Surah Al-Isra 17:25)

Holy Quran also mentions who will enter hell. For sure disbelievers in Lord and especially if they die in that state of, hypocrites, idolaters, the arrogant, those who treat religion as a pastime, have broken the treaty, made fun of Allah’s Messengers or on the reality of Day of Judgment. Also, murderers, ones misappropriating inheritance especially of orphans, slandering chaste women or claiming divinity for themselves on their own will reside in hell. Allah says:

“But if not you do, and never will you do, then consciously revere the Fire whose [its] fuel (is) [the] men and [the] stones, prepared for the disbelievers.” (Surah Al-Baqarah 2:24)

The consistent description of Hell in the Quran is as a blazing fire that is fueled by “men and stones.” It is thus often called “hell-fire.”At most of the places where Hell is mentioned, the beauty and peace of Heaven are also mentioned to show the contrast between them. So Muslims are obligated to pray five times a day and ask forgiveness and protection from hellfire in each prayer from Allah Almighty. Allah says:

“Indeed, those who disbelieved in Our Signs, soon We will burn them (in) a Fire. Every time are roasted their skins We will change their skins for other (than) that, so that they may the punishment. Indeed, Allah is All-Mighty, All-Wise.” (Surah An-Nisa, 4: 56)

The suffering and nightmare of hell will be of such degree that it will never seem to end. Allah SWT has described the magnitude of the deepness of the pit of Jahannam in His Sacred Scripture as Allah says:

The particular heaven or hell that is to be man’s eternal abode exists at present and is perfected by one’s thoughts, beliefs, and actions. However, no one other than the Prophet (ص) has seen these eternal abodes. That paradise in which Adam and Eve (ع) lived, and the heaven and hell that can be seen before death in dreams and visions, and during death and after death in the grave are simply manifestations of those eternal abodes.