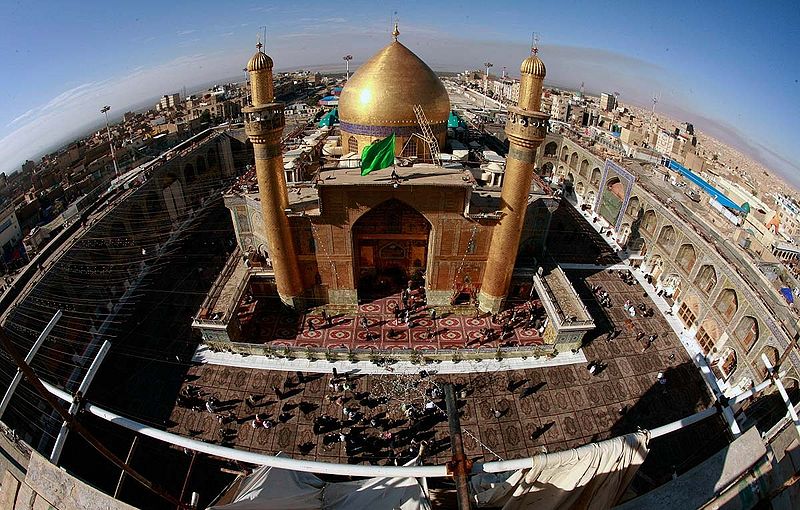 Hazrat Ali (RA) belonged to the tribe Quraish and the family of Bani Hashim in Makah. He was born In the Holy Kabah in Mecca on Friday, 13th Rajab 23 BH. He (RA) was the son of Hazrat Abu Talib (RA) the uncle of Holy Prophet (SAW), who had nourished and brought up Hazrat Muhammad (SAW).

His mother Fatima bint-e Asad was also a noble lady belonging to the tribe of Bani Hashim whom the Prophet (SAW) respected as his mother.  When he was born his name was suggested by Hazrat Muhammad (SAW) that’s why his name became more significant. Hazrat Ali (R.A) had the great honour of being the first cousin of Hazrat Muhammad (SAW) and was also brought up under His kind and inspiring supervision for most of the time of his life.

When the Holy Prophet (Sallallahu ‘alaihi we Salaam) started to preach openly, he invited all of his family members to a feast and announced his mission before them.

Nobody listened to him, but young Ali stood up and said. “Though my eyes are sore, my legs are thin and I am the youngest of all those present here yet I will stand by you, 0h Messenger of Allah.” Hearing this all the leaders of Quraish laughed but Ali proved his words to be true after supporting the Holy Prophet (Sallallahu ‘alaihi we Salaam) in his mission from the beginning till the end.

One of the most towering personalities of Islam, Hazrat Ali. From his unique birth and throughout his life, he was an individual that stood out. He was considered the Lion of Allah and a force to be reckoned with. Not only this but the Holy Prophet loved him deeply. He was his guide and mentor throughout life. A guide that helped him make decisions and a statement that we still quote today.

Risking His Life For The Messenger PBUH Of Allah

He followed the command gladly and immediately jumped into the bed. This shows the remarkable and unmatched fearlessness of Hazrat Ali (R.A) who was not concerned about his own life, rather committed his existence to serving the Holy Prophet ﷺ as he successfully returned all trusts to those they belonged the very next day, and then migrated to Madina.

In the 2nd year of migration to Medina, the Holy Prophet (SAW) got many marital proposals for Hazrat Fatima (RA) who was the most beloved daughter of Prophet Muhammad (SAW). But He (SAW) rejected all of them and finally decided to marry her to Hazrat Ali (RA) with mutual approval. He (RA) got the honour of becoming the Son in Law of Prophet Muhammad (SAW) and transforming their ever closer relationship with a family bond.

Great Honor Of Hazrat Ali (R.A) Near The Apostle PBUH of God

Imam Ali (R.A) spent most of his time under the supreme direction of the Holy Prophet ﷺ, from Whom he got the inspiration and learned about many aspects of life. Due to his vast knowledge of various matters, especially his courage and authority, Rasulullah ﷺ used to appoint him as his deputy.

Fighting In Battles With Great Courage

Hazrat Ali (R.A) was highly recognized for his guts and boldness while fighting the infidels. Apart from Ghazwa (battle of) Tabuk, he (R.A) participated in almost all the early clashes against non-believers with great distinction. He always used to accept the challenges of his opponents courageously.

In the very first combat with the Makkan disbelievers, Ghazwa Badr, he was among three Muslims alongside Hazrat Hamzah (R.A) and Hazrat Abu Ubaidah (R.A) who started the fight in Arab tradition. He caught the eye of everyone with his terrific warfare skills from that encounter.

Being a Great Scholar of Arabic Language And Quran

Hazrat Ali (R.A) had an incredible amount of command over the teachings of Islam, especially in the Holy Quran. He was regularly consulted by the first three Caliphs, Abu Bakr (R.A), Umar (R.A) and Usman (R.A) during their time in power. Hazrat Ali (R.A) also made him deputy at Madina while being outside the city himself.

Hazrat Ali (R.A) had a great insight into Arabic literature, rhetoric, and grammar. He (R.A) also had fabulous abilities in public speech and sermons, writing letters, and recording his sayings which are well preserved and followed by the Muslim world to date. He (R.A) once said:

“Life consists of two days, one for you one against you. So when it’s for you don’t be proud or reckless, and when it’s against you be patient, for both days are the test for you.”

In the year 40 A.H, the rebellion group called Kharijites, declared the rule of the Caliph, Hazrat Ali (R.A), Amir Muawiah in Syria and Amr bin al-Aas in Egypt was not authentic and that there should be no Khilafat after Hazrat Umar (R.A). They dispersed to kill all three of them.

They could murder Muawiah and Amr, but one of the rebels, known as Ibn-e-Muljim, managed to martyr Hazrat Ali (R.A) using a poisoned sword while he (R.A) was performing Salah in the mosque on 20th of Ramadan, in 40 A.H.

In short, Hazrat Ali (R.A) was the very first among the youth to accept Islam and was always very close to the Holy Prophet ﷺ. He (R.A) had unmatched combating skills and was well known for his bravery during battles against the non-believers. He also possessed the necessary personality traits of a firm belief in Allah and His Messenger ﷺ, humbleness, gratefulness, and true insight into the Quranic Instructions.

He had to go through tough periods of high resistance from so-called Muslims and others during his Caliphate, but he (R.A) remained resolute on reestablishing peace in the Muslim society. To conclude, Hazrat Ali (R.A) spent his entire life in the great service of Islam.