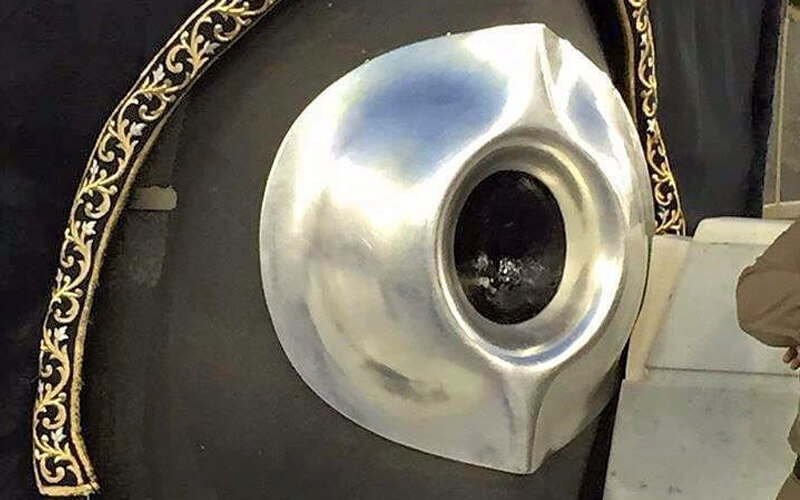 It’s one of the most righteous and virtuous blessings by Allah with an overflowing source of bounty and munificence. According to Islamic tradition, the stone was set intact into the Kaaba’s wall by Prophet Muhammad (PBUH) in the year 605 A.D., five years before his first revelation. The Kaaba is a pre-Islamic shrine that was a sacred sanctuary and a site of pilgrimage of Semitic Nabateans who visited the shrine once a year to perform their pilgrimage.

Pertaining to its heavenly origin and its true colour, Prophet Muhammad (PBUH) said in one of His hadiths:

“The Black stone descended from paradise, and it was more white than milk, then it was blacked by this sins of the children of Adam.” (Tirmidhi)

This hadith proves that Hajar Aswad is a stone that came from paradise, and it was originally in a pure white state, which then started, turning black with the progression in the increasing sins of humankind. At the time of the first construction holy Kaaba, this stone was present there. In the year 606 when Holy Prophet Muhammad (PBUH) was fifty years old, the building of Kaaba was damaged by the flood and Quraish constructed it again. When the wall was raised till the footprint of Hazrat Adam the problem of fixing the stone was there and quarrels between tribes started. Each tribe wanted to have the honour of placing this stone. Prophet Muhammad (PBUH) figured out the solution to this problem and placed

Prophet Muhammad (PBUH) said in one of His hadiths:

“By Allah! On the Day of Qiyaamah, Allah will present the Hajare Aswad in such a manner that it will have two eyes and a tongue to testify to the Imaan (faith) of all those who missed it.” (Tirmidhi)

It is commonly known as the Black Stone which is emplaced in the southeastern corner of Kaaba. Al-Hajar Al-Aswad and mounted with a wide, oval, silver frame so that the face exposed to view is about 20 x 16 cm. The stone ultimate origin, symbolism is a mystery yet speculation continues. Black stone has no mention in the Holy book of the Quran nor has any detailed verse or word in the sacramental verses.

“The Hajar Aswad and al-Maqam (Ibrahim) are the two jewels from the jewels of Paradise. Had Allah not concealed their radiance, they would illuminate everything between the East and the West.” (Tirmidhi)

Hajr E Aswad is placed in the Eastern corner of the Kaaba, then innumerable people, sanctified and pious personalities, Prophets and their apostles had touched and kissed this Holy Stone.

Supplications made at Hajr e Aswad are accepted and it will testify Muslim’s faith in favour of the pilgrim, in front of Mighty Lord at the Day of reckoning. Hadith quotes it as:

“By Allah! On the Day of Qiyamah, Allah will present the Hajar al-Aswad in such a manner that it will have two eyes and a tongue to testify to the Imaan (faith) of all those who kissed it.” (Tirmidhi)

Due to its heavenly nature, it has been termed as a jewel of paradise that doubles its significance for a faith bearer Muslim. Nature has described as the radiant most stones the light of which was concealed by the Rab of the universe as Hadith narrates:

“The Hajr al-Aswad and al-Maqam (Ebrahim) are two jewels from the jewels of Paradise. Had Allah (Glorified and Exalted is He) not concealed their radiance, they would illuminate everything between the East and the West.” (Tirmidhi)

Some of the people have made it a centre of blessings and deemed it an obligation to touch and kiss the black stone in every circumambulation of Kaaba. This is their ignorance or little knowledge regarding the practices of performing the Pilgrimage.

Hajar Aswad is a thing of Paradise and the only reason why Muslims kiss it and give reverence to it is that Prophet Muhammad (PBUH) kissed it and held it reverend. Therefore, for a Muslim, it is imperative to give respect to the stone but keep things in mind that it is Allah Almighty who needs to be worshipped and no stone can give either benefit or harm to any person.

Surmising, Hajr E Aswad is the stone blessed to Hazrat Ibrahim (AS) to decide the centre of Kaaba rather than as a tool of worshipping. Considering its imperative nature it should be respected regardless of its origin and myths associated with it since pagan times. The only thing that Muslims should keep in mind is that the sole worshipping lord is He Himself and none bears the power to be worshipped.