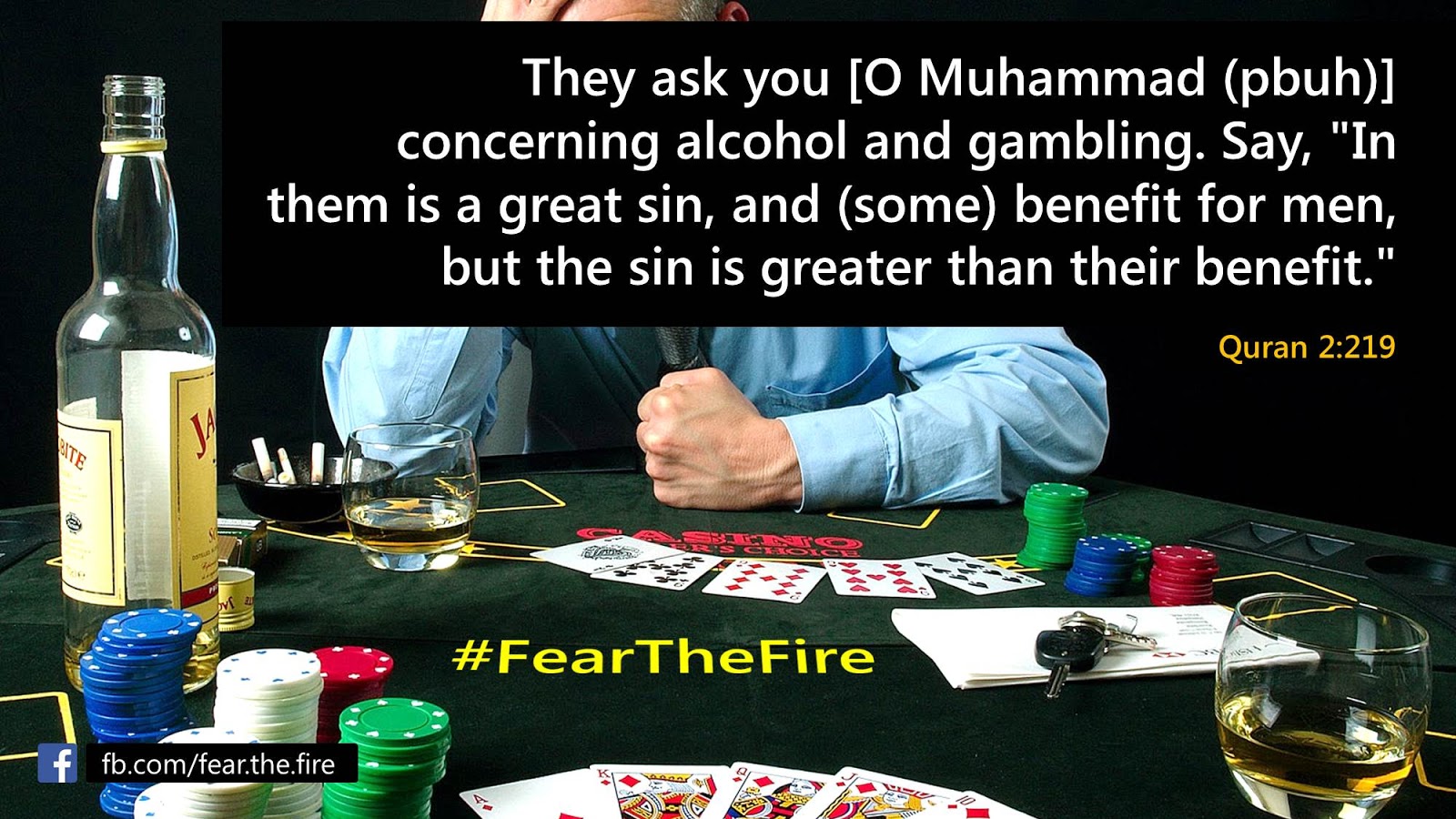 The Islamic teachings urge the Muslim to follow Allah’s directives for earning a living, to use natural laws and direct means for the attainment of his objectives, and to employ such causes to produce the desired effects. When Islam came, it described the evils of gambling in the most effective language and prohibited it for Muslims. In Islam, an individual’s property is sacred; it may not be taken from him except through lawful exchange or unless he gives it freely as a gift or in charity. Accordingly, taking it from him by gambling is unlawful. Allah says:

“O you who have believed, indeed, intoxicants, gambling, [sacrificing on] stone alters [to other than Allah], and divining arrows are but defilement from the work of Satan, so avoid it that you may be successful.” (Surah Al-Ma`idah 5:90)

Gambling is mentioned in the Quran, alongside drinking alcohol as an abomination, a sin, and grave harm to mankind. It was made clear that prosperity does not come through gambling. Gambling, among many other things, causes families to break, societies to suffer, and the economy to deteriorate, damaging the ethical foundation of any decent society. Allah says:

“The Shaitan only desires to cause enmity and hatred to spring in your midst by means of intoxicants and games of chance, and to keep you off from the remembrance of Allah and from prayer. Will you then desist?” (Surah Al-Ma`idah 5:91)

With regard to the wisdom behind this prohibition in Islam, any wise person will see that there are many reasons for it, including the following:

“They ask you about intoxicants and games of chance. Say: In both of them there is a great sin and means of profit for men, and their sin is greater than their profit. And they ask you as to what they should spend. Say: What you can spare. Thus does Allah make clear to you the communications that you may ponder” (Quran 2:219)

Gambling, which includes raffling or the lottery, on the other hand, makes a person dependent on chance, ‘luck’ and empty wishes, taking him away from honest labour, serious work, and productive effort. The person who depends on gambling loses respect for the laws of causation that Allah has established and commanded people to use. Allah says:

“O you who believe! Surely Allah will test you through something of the game – can reach it your hands and your spears that Allah may make evident who fears Him in the unseen. And whoever transgressed after that, then for him (is) a punishment painful.” (Surah Al-Ma`idah 5:94)

Gambling has its own compulsion. The loser plays again in hope of winning the next game in order to regain his earlier losses, while the winner plays again to enjoy the pleasure of winning, impelled by greed for more. Naturally, luck changes hands, the loser becomes the winner and the winner the loser, and the joy of winning changes into the bitterness of loss. Thus the gamblers may persist at playing the game, unable to bring themselves to leave it; this is the secret of the addiction to gambling.