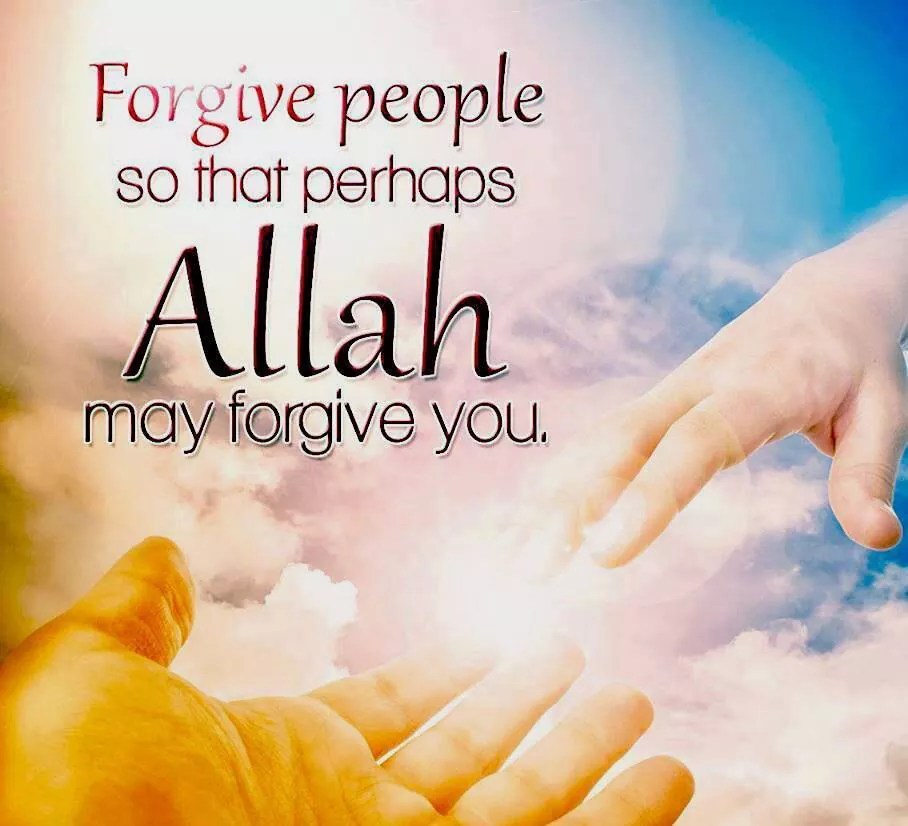 Throughout the Holy Qur’an, the Mercy of Allah and His Forgiveness has been mentioned a great many times and we can understand through the many examples that are given, that we must strive to be forgiving to each other as well. It is natural to be upset at someone when they’ve hurt you. Forgiving means not wishing evil, even if secretly, upon the person. The Gates of Paradise will be opened for those who found it in them to finally seek Forgiveness. Allah says:

Seeking forgiveness from Allah with repentance is a virtue. Human beings are not perfect. Forgiveness is a critical aspect of Islam as everybody makes mistakes in life and unintentionally commits sins. Muslims believe that Allah is Merciful and Forgiving. Whoever forgive others from the heart then Allah Almighty will reward him and we know Allah’s rewards are best of all. Allah says:

The believers are those who spend in charity during ease and hardship and who restrain their anger and pardon the people, for Allah loves the doers of good.” (Surah Ali Imran 3:134)

Allah is all-forgiving and pardoning we should seek forgiveness from Him and try to forgive others too. It means you can continue to be civil towards them, and that you can even bring yourself to pray for their well-being and guidance.

Forgiveness from Allah Almighty, some of them are given below:

In Quran, the word “Allah is Most Merciful” is repeated many times. In religion Islam, anyone who has sinned can ask forgiveness directly from the Lord, there is no one between Allah and the one who is asking forgiveness from Him. In the Quran, Allah says: “God loves those who turn unto Him in repentance and He loves those who keep themselves pure.” If someone asked forgiveness with repentance then Allah will love him/her and surely He will forgive him/her but there is one condition and that is he/she should not commit that sin or mistake again.

In the Holy Quran “forgiveness” and “mercy “are mentioned around 100 and 200 times respectively. An entire chapter of the Quran is devoted to the quality of mercy that is (Surah Rahman). We all know that Allah is the Most Merciful and He forgives those who ask forgiveness with repentance. The Power of Forgiveness in Islam not only lies in seeking the great Mercy and Forgiveness of Allah, but it also lies in being forgiving each other as well. Allah says:

Forgiveness from another Human Being

If someone did wrongs to another human being, the act must first be redressed with the wronged person or human being who should be asked for forgiveness before asking forgiveness from Allah. Islam teaches human beings to be forgiving and if someone sincerely asks for forgiveness, the wronged person should forgive him. Our beloved Prophet (SAW) said: “Whoever suffers an injury and forgives (the person responsible), God will raise his status to a higher degree and remove one of his sins.” If we expect forgiveness from Almighty Allah then we also can forgive others.

Finally, the belief in the forgiveness of God as the final authority leads the person to gain a sense of responsibility and accountability. You do not depend on the mindset that someone else will be taking care of your sins. No, you are accountable, individually, before God and as such you have this sense of trying your best in following His command. Allah says:

“Whoever is patient and forgives, verily, that is among the matters of steadfast determination.” (Surah Ash-Shura 42:43)

Let’s not get caught up in the illusion of pain given by the people that you fail to see the bigger picture. By forgiving, you are accepting the reality of what happened and finding a way to live in a state of resolution with it. This can be a gradual process and for some, a journey of a lifetime…This life is a test. Allah is going to test us through other people too. Allah says:

The need for forgiveness and the need to be forgiving is what makes us Muslim. When sincerely asking for forgiveness, the intention should be not to knowingly repeat the same sin. A Muslim is to think better of Allah. No denying the fact that Allah is Mighty, Just and Wrathful, however, at the same time He is Merciful and forgiving. May Allah give us the strength to forgive others and also ask forgiveness from them! Ameen