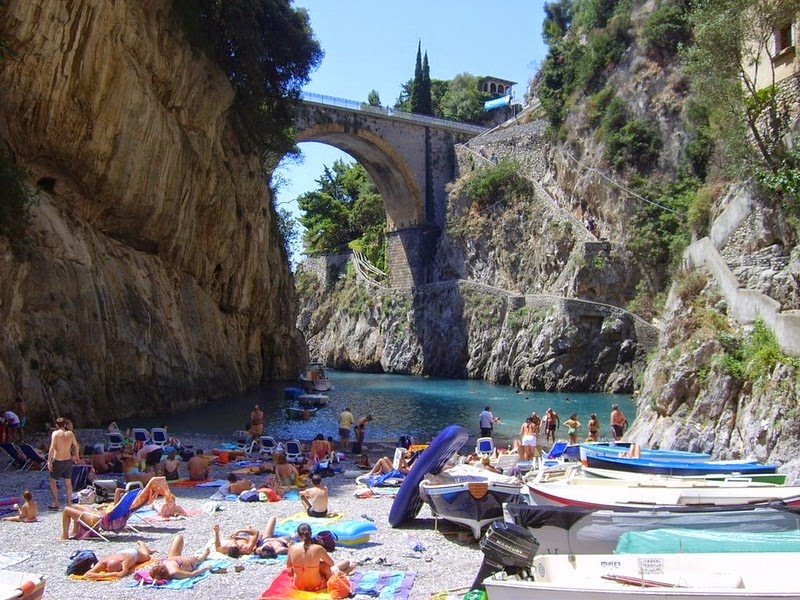 Furore is a small village located in the Coast of Amalfi, in the province of Salerno in the Campania region of south-western Italy. A long time ago, there was a small settlement here scattered over the mountain overlooking the sea, along a scenic road. There were no central piazza and no tight clusters of houses. The paths and stairs that led to the village were also not visible from the coastline, so that Furore remained practically hidden to the passing traveller.

This earned Furore the name of “the village that doesn’t exist.” It was then the mayor decided it was time to put his tiny comune on the map. He ordered every house to be brightly painted so that they couldn’t escape the sight of travellers passing down the road. This tradition is maintained till this date, by inviting artists from around the world every September to paint and decorate the local buildings with murals.

Furore’s main attraction is the so-called fjord or Fiordo. It’s actually a ria – a narrow gorge cutting inland from the sea, created by the Schiato stream that runs along the mountain to the sea. A cluster of old fishermen’s houses cling to the cliffs. The fjord is also the oldest part of Furore. The main village now stands 300 meters above, in the upper Vallone del Furore.

The fjord is bypassed by an arch bridge over which a state road passes. The 30 meters high bridge is also the location where every summer the International Diving Championship is held.