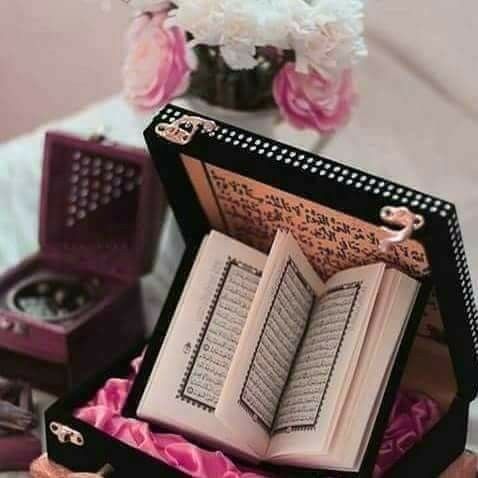 The most read book throughout the world, The Holy Quran, is the last book of Allah carrying the message of mercy, forgiveness, and peace for all mankind. The Holy Quran was revealed more than 1400 years ago to the last messenger of Allah, Prophet Muhammad (PBUH) as the final word to call mankind towards the creator and share the truth about the universe with humankind. Allah says:

The message in the Quran shows us the way to spend our lives in accordance with the guidelines provided by Allah and to follow the teachings of the Prophet Muhammad (PBUH). Reciting Quran reveals many treasures of wisdom hidden in the Holy Book which draw us closer to believe in the oneness of God and the message of Islam. Allah says:

Quran is a miracle of Allah. During the recital of the Quran, you will get a very strong feeling that the verses are directed towards you and you are being taught the code of life by the divine power Himself. The Quran shares an intimate feeling and Allah talks to His creatures directly. Another miracle of the Quran is its preservation through centuries. Today, the Quran Aayahs we recite is the same that was revealed to the Prophet Muhammad (PBUH). This is only possible due to the divine intervention of Allah (SWT) as He has taken the responsibility for its protection Himself. Allah says:

“(Their doom is) because Allah sent down the Book in truth but those who seek causes of dispute in the Book are in a schism far (from the purpose).” (al-Baqara, 2:176}

Allah has safeguarded the verses of the Quran from pollution by making it easy to be read and memorized. Today, it is the only book that is memorized, word by word, by millions of Muslims.  Allah says:

“And We have certainly made the Qur’an easy for remembrance, so is there any who will remember?”

Following are some important facts about the Quran that every Muslim must know. Hopefully, this small contribution to encourage people to recite Holy Quran will work in the right direction.

Facts and Figures about the Holy Quran

Quran, which is an Arabic word that literally refers to “the recitation,” is the core religious book of Islam. Quran is a divine book revealed on the Last Prophet Muhammad (PBUS) over a period of twenty-three years. The last revealed book contains a message of Allah (SWT) for the guidance of humankind.

A Book of Practice, not Theory:

The Quran is not a book that deals with some historical, social, philosophical and ethical facts theoretically. On the contrary, it aims to establish a community shaped by the universal ethical and spiritual principles that it introduces. It aims to eradicate everything related to lack of virtue and evil and to make the whole of mankind surrender to Allah, that is, Islam, as it transformed one of the most ignorant societies of the world into the most virtuous society {2/193}; it is a revolutionary book. The Quran was sent down so that it would be practised and obeyed.  Allah says:

” Follow (O men!) the revelation given unto you from your Lord, and follow not, as friends or protectors, other than Him. Little it is ye remember of admonition!” (al-Araf, 7/3)

Everybody who believes in the Quran, primarily, the Prophet (PBUH), has to obey it and uphold the principles imposed by it:  Allah says:

There are countless facts about the Quran and its revelation some of the others which are shared over here:

“…There hath come to you from Allah a (new) Light and a perspicuous Book.― Wherewith Allah guideth all who seek His good pleasure to ways of peace and safety, and leadeth them out of darkness, by His Will, unto the light,― guideth them to a Path that is Straight.” (al-Maida, 5:15, 16)

How were the Quran’s verses and chapters arranged?

The present arrangement of the Quran is not the work of later generations but was made by the Prophet, peace be upon him (p), under God’s directions. Whenever a chapter was revealed, the Prophet (p) summoned his scribes, to whom he carefully dictated its contents, and instructed them where to place it in relation to the other chapters. The Prophet (p) followed the same order of chapters and verses when reciting during ritual Prayer as on other occasions, and his Companions followed the same practise in memorizing the Quran.  Allah says:

“And if ye are in doubt as to what We have revealed from time to time to Our servant, then produce a Surah like thereunto; and call your witnesses or helpers (if there are any) besides Allah, if your (doubts) are true. But if ye cannot and of a surety, ye cannot then fear the Fire whose fuel is Men and Stones, which is prepared for those who reject Faith.” (al-Baqara, 2/23, 24)

It is, therefore, a historical fact that the collection of the Quran came to an end on the very day that its revelation ceased. The One who was responsible for its revelation was also the One who fixed its arrangement. The one whose heart was the receptacle of the Quran was also responsible for arranging its sequence accordingly. This was far too important and too delicate a matter for anyone else to become involved in.  Allah says:

“A Book which We have revealed unto thee in order that thou mightest lead mankind out of the depths of darkness into light― by the leave of their Lord― to the Way of (Him) Exalted in Power, Worthy of all Praise!” (Ibrahim, 14:1)

When you open up the Quran and start reciting it, you’ll find many gems and inspirations that no one else could have found. It’s like being directly guided by a light source. The knowledge found in the Holy Quran is indisputable. The scientific facts revealed in the Quran have been proven true and no one can refute the divine wisdom behind the verses of the Quran. The stories of prior Prophets and religions have also been proven true.  Allah says:

“Here is a Message for mankind: Let them take warning therefrom, and let them know that He is (no other than) One God: let men of understanding take heed.” (Ibrahim, 14:52)

“O mankind! There hath come to you an admonition from your Lord and a healing for the (diseases) in your hearts and for those who believe, a Guidance and a Mercy. Say: “In the Bounty of Allah and in His Mercy― in that let them rejoice”: that is better than the (wealth) they hoard.” (Yunus, 10:57-58)

Try to learn the holy Quran and inculcate the habit of reading it daily to witness these miracles yourself. There are many online resources that you can consult for understanding the Quran and learning it with complete translation and meaning, one of them being QuranReading.com. Start today to make your life part of a miracle. Learn the facts about Quran and increase your faith.  Allah says:

“Say the Holy Spirit has brought the revelation from thy Lord in truth, in order to strengthen those who believe and as a Guide and Glad Tidings to Muslims.” (an-Nahl, 16/102)

The Quran, “the miracle book”, that will end the dark days that we live in and the troubles and agonies that we suffer and that will lead the whole of mankind to “the universal happiness”, is at our disposal as an unmatched treasure. What we need to do is to read this “recipe of salvation” with attentive eyes in order to find relevant answers to today’s questions and to have the dynamism and excitement that existed in the first days of Islam.