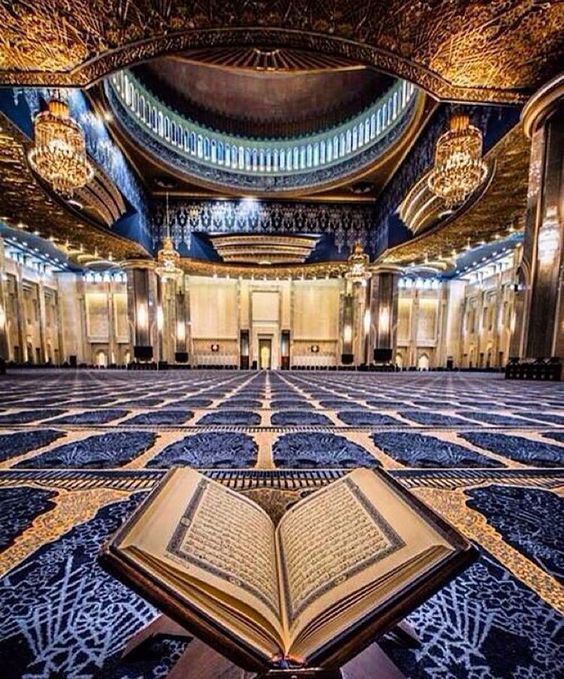 “Islam” means “surrender” or “submission”. “Salam” (which means “peace”) is the root word of “Islam”. In a religious context, the word “Islam” means “the surrendering of one’s will (without compulsion) to the true will of God in an effort to achieve peace”. Islam is the name of the religion that Muslims follow. Islam is named after the action of submitting to God’s commands and will and not a person. Allah says:

“O you who have faith, stand firm for Allah as witnesses in equity (qist), and let not the hatred of people cause you to not be just. Be just (‘idlu), for that is nearer to righteousness.” (Surat al-Ma’idah 5:8)

Muslims believe in God the Creator of the universe. The Arabic term for God is Allah. Sometimes Muslims prefer to use the name Allah over God because Allah linguistically does not have a gender and cannot be made plural. The English name God could become a goddess or gods. The main message of the Qurʾān is that God is one. He has no partner, child, or helper. Allah says:

“Men are guardians over women by what Allah has favoured some over others and by what they spend of their wealth.” (Surat al-Nisa 4:34)

“Muslim” means “anyone or anything that surrenders itself to the true will of God”. By this definition, everything in nature (trees, animals, planets, etc.) are “Muslims” because they are in a state of surrender to God’s will. In other words, they are fulfilling the purpose for which God created them.

Islam is built upon five pillars:

These practices must be undertaken with the best of effort in order to be considered a true Muslim:

There are six articles of faith in Islam

These are the basic beliefs that one must have in order to be considered a true Muslim. They are believe in

If you’re looking for facts about Islam, it might also be good to know some glossary.

Muslims believe that God has revealed 99 of His names, or attributes, in the Qur’an. It is through these names that one can come to know the Creator. A few of these names are the All-Merciful, the All-Knower, the Protector, the Provider, the Near, the First, the Last, the Hidden and the Source of All Peace. Allah says:

Muslims follow the subsequent, final and preserved revelation of God, the Qur’an. The Qur’an was not authored by Muhammad. It was authored by God, revealed to Muhammad (through angel Gabriel) and written into physical form by his companions. The original Arabic text of the Qur’an contains no flaws or contradictions and has not been altered since its revelation. Allah says:

Here are some interesting facts about Islam:

Anyone who condones or commits an act of terrorism in the name of Islam is simply not following Islam and is, in fact, violating its very tenets. These people are individuals with their own personal views and agendas. Fanatical Muslims are no more representative of the true teachings of Islam. Allah says:

“Whoever should desire the immediate life, We will hasten for him from it what We will to whom We intend. Then, We have made for him Hell in which he will enter to burn, censured and banished.” (Surah Al-Isra 17:18)

The Islamic concept of God is that He is loving, merciful and compassionate. Islam also teaches that He is all-knowing and the perfect judge of affairs, and will punish (or forgive) accordingly. However, Allah once said to Muhammad, “My mercy prevails over my wrath”. So Islam teaches a balance between fear and hope, protecting one from both complacency and despair. Allah says:

If all Qur’ans in the world today were destroyed, the original Arabic would still remain. This is because millions of Muslims, called “Hafiz” (or “guardians”) have memorized the text letter for letter from beginning to end, every word, and every syllable. Also, chapters from the Qur’an are precisely recited from memory in each of the five formal prayers performed daily by hundreds of millions of Muslims throughout the world. Allah says:

The Hajj is an annual pilgrimage to the Kaaba made by about 3 million Muslims from all corners of the Earth. It is performed to fulfil one of the pillars of Islam. The rituals of hajj commemorate the struggles of Abraham, his wife Hagar and their son Ishmael in surrendering their wills to God.